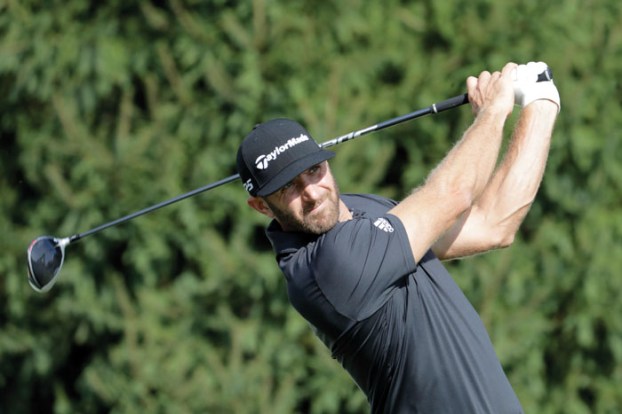 Dustin Johnson tees off on the 14th hole during the first round of the Northern Trust golf tournament, Thursday, Aug. 23, 2018, in Paramus, N.J. (AP Photo/Julio Cortez)

Koepka powers into a share of the lead at Northern Trust 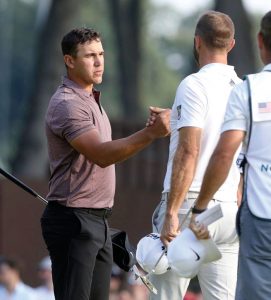 By DOUG FERGUSON, AP Golf Writer
PARAMUS, N.J. (AP) — Brooks Koepka showed some muscle and unleashed a monstrous finish Friday to share the lead in The Northern Trust.
Tiger Woods missed yet another putt and was relieved to still be playing.
Koepka spent most of the second round trading birdies and bogeys, going nowhere. One swing changed everything on the 631-yard 13th hole at Ridgewood Country Club. From just under 310 yards, he swung 3-wood as hard as he could and saw the tight draw that had been missing all day. It stopped 20 feet from the hole, Koepka made it for eagle and then closed with three straight birdies for a 6-under 65.
He tied Jamie Lovemark, who shot a 66.
“I wasn’t happy the first 11 holes the way I hit it,” Koepka said. “When I hit that 3-wood, it all clicked. I felt like I was finally able to release the golf club. Just tried to hit as hard as I could, big draw. Aimed at the tree on the right and tried to draw it back to the flag. When I did that, everything started to click.”
The U.S. Open and PGA champion took it from there.
Lovemark, winless in 135 starts as a pro, made five birdies in a six-hole stretch around the turn and was the first to reach 10-under 132.
Before long, a list of contenders lined up behind them in an entertaining start to the FedEx Cup playoffs.
Adam Scott, building on his confidence from playing in the final group at the PGA Championship, had a 64 for the low round of the tournament and was one shot behind. Another shot back was Dustin Johnson, the world No. 1, who had another 67 that for the second straight day featured a triple bogey on his card. At least he got this one out of the way early, taking five shots from a mangled lie in deep rough behind the first green.
“That was not a fun start,” Johnson said. “There was nothing to do but laugh at that point.”
Bryson DeChambeau had a 66 and joined Johnson at 134. The group at 7-under 135 included Sean O’Hair, who is No. 112 in the FedEx Cup and needs to get to No. 70 by the third playoff event at the BMW Championship being played this year at Aronimink, his home club outside Philadelphia. He already is planning to play the member-guest a few weeks later, but O’Hair would love to play Aronimink for a $9 million purse.
Woods was not part of the action, even though he hit the ball beautifully. Woods had a birdie putt on every hole until the par-3 15th, when his tee shot rolled just off the green against the collar. All he had to show for it was two birdies, giving him four birdies in 36 holes.
He finished with a three-putt bogey from just inside 30 feet, giving him another 71. He made the cut on the number, leaving him 10 shots behind.
“The name of the game is you’ve got to make putts, and you’ve got to roll it,” Woods said. “No matter how good your drive, you’ve still got to roll them and still got to make putts, and I didn’t putt very well today. I had a hard time seeing my lines, and consequently didn’t make anything.”
Jordan Spieth made putts to get off to a good start, only to give it all back with a triple bogey on his 10th hole of the round at No. 18. Worse than pulling his tee shots into the trees, worse than the penalty shot, was Spieth sweeping in a 10-inch putt for double bogey only to stub the putter and move the ball only a few inches.
Scott continues to keep two putters in the bag, long and short. The idea is to use the short putter for the medium-length putts that have been a struggle for him. At the PGA Championship and at Ridgewood, however, he has found a good stroke with the long putter and felt no need to change.
The biggest difference is confidence. He is starting to recognize the player who reached No. 1 in the world a few years ago, and only a month ago was getting closer to falling out of the top 100. The third-place finish at Bellerive at least put him back in the top 50, but did a world of good between the ears.
“It’s just been very hard to find that consistency for me this year, and I’ve been chipping away at it the last couple months and it all came good at the PGA,” Scott said. “And teeing off this week, I felt the most confident of any tournament this year. I just couldn’t wait to get up here, really.”
Koepka knows all about confidence with two major trophies sitting at home in Florida. The knock has been that he hasn’t won enough regular PGA Tour events, so he wanted to treat the FedEx Cup playoffs like majors in how he prepared, even down to renting a house and bringing his own chef, trainer and regular crew.
Five shots out of the lead, he tugged a tee shot into the left bunker on the reachable par-4 12th, and hit a clean sand shot to 3 feet for birdie. Then came a big drive on the 13th, and a 3-wood that carried him to his big finish.
Kevin Tway was the only other play to reach the 13th green in two. He shot 69 and was part of the group at 7-under 135.
“Sometimes it doesn’t always go as perfectly planned as you’d like, and then you make one good golf swing, and all of a sudden you’ve got that feeling, you’ve got that rhythm and then you can build off that,” Koepka said. “And that’s kind of what happened today.”

When weather turns cold, where do Rowan County wildlife go?