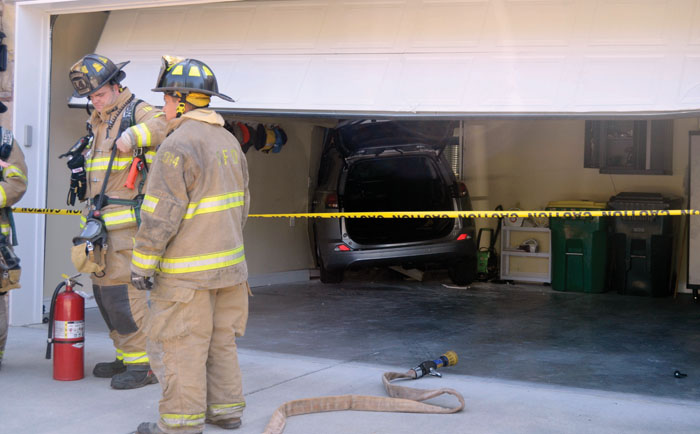 Salisbury firefighters respond to a crash where the owner crashed into the garage and through the entryway of this Winged Foot Drive condo. He was not injured and temporarily trapped inside. Shavonne Walker/Salisbury Post

SALISBURY — A man had to be helped out of his vehicle after he accidentally hit the gas pedal while pulling into his garage, sending the vehicle crashing through the entryway and kitchen.

Arthur Bolick, 77, was not injured after he pulled his 2017 Toyota sport utility vehicle into his garage as the door was opening. He began easing the vehicle inside, but the door wasn’t open all the way.

“He hit the garage door with the car, panicked and hit the gas,” said Lt. Greg Beam of the Salisbury Police Department.

The vehicle crashed into the house, causing quite a bit of damage, Beam said.

The initial call came to 911 just before 3:30 p.m. Thursday. The caller said someone was pinned inside a vehicle in the 3100 block of Winged Foot Drive.

“He crashed through a load-bearing wall into the interior of the house,” said Salisbury Fire Department Battalion Chief David Morris.

Morris said because there were electrical lines nearby, the power and gas to the house were turned off before rescuers got Bolick out of the vehicle.

The condo is uninhabitable, Morris said, because of the damage to an interior wall.

The American Red Cross was called to assist the family.

The condo is in the center of a three-unit building. The neighboring condos were not damaged. A Rowan County building inspector was called to determine the exact damage.