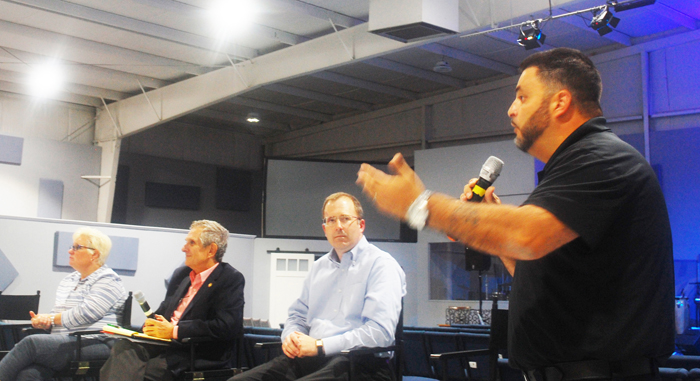 SALISBURY — City leaders heard concerns about the vandalism of the Confederate statue and crime in general at the third Chit, Chat & Chew gathering Thursday evening.

Two residents asked questions to City Council members Tamara Sheffield, Brian Miller and David Post about whether there is surveillance around Fame, the statue of a winged mused carrying a fallen Confederate soldier that was vandalized last weekend.

Post followed up by saying that Valley’s question is one that many Salisbury residents have.

“I have received a number of emails, and I’m sure they have, too, been asking exactly your question — if we have provided any type of surveillance to it. And I’m sure it’s something that the chief is looking at,” Post said. “This point of time, there aren’t any cameras.”

Miller said the statue is something that the community as a whole will have to discuss and find a solution that works for everybody.

“This is an issue that our community will have to deal with — point blank,” Miller said. “That statue means different things to different people. We have to come up with, as a community, an answer of how we’re going to handle this one that is respectful to all perspectives.”

Melissa Eller said she came to Chit, Chat & Chew to better understand how the community feels about the Confederate monument. She said she would like an explanation of why the statue was put up.

Miller said to him, the statue is “a piece of metal, and it has no power over me.”

“I’m not willing to tear apart the city over a statue,” he said.

Sheffield said there are a lot of options to protect it, including adding signage or moving it to a historically prominent place. But she said the decision involves the community, the owners of the statue and the North Carolina General Assembly, which recently passed a law on the relocation or removal of Confederate statues.

Shirley Rye said she is concerned about gang activity in the area.

Stokes said with the help of the U.S. Department of Justice, the Police Department is hoping to work on a long-term solution to decrease gang activity, including going into schools and working with students who have faced childhood trauma and being more present in neighborhoods to provide a better relationship with residents.

City Manager Lane Bailey said residents should not fear they will be a victim of crime.

“A lot of the crime is bad people doing bad things to each other,” Bailey said.

Diane Leazer talked about her son’s struggle with opioids and wondered if the city could implement a drug court program that diverts drug users from imprisonment to treatment programs.

Post said such a program would be implemented at the state level and suggested that Leazer contact her state legislators.

Miller took time at the beginning of the meeting to address disagreements among council members and their willingness to work together.

Anne Little, the city’s human relations director, summed up the town hall-style talk by saying, “Our common denominator is Salisbury.”

Fire Chief Bob Parnell talked about fire response times and said with the construction of Fire Station 6, they will be cut to two or three minutes. The Fire Department will be fully staffed using a grant it has received, he said.

Wendy Brindle, the city engineer, said improvements to pedestrian safety on South Main Street are on the way thanks to another grant.

Mayor Al Heggins did not attend the session because she is at a meeting for mayors in Grand Rapids, Michigan. Councilwoman Karen Alexander made an appearance but left early for a medical issue regarding her husband.