Dr. Ada Fisher: Aretha Franklin’s music appealed to the best in us 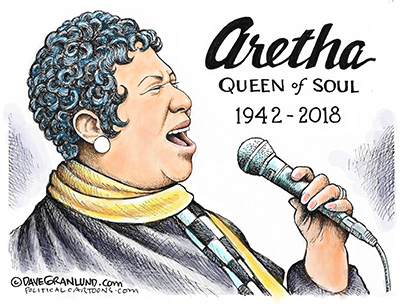 Missed in the tributes to the late Aretha Franklin was the magnitude of her musical progression from gospel based in the Baptist church of her father, the Rev. C.L. Franklin of Detroit, to rock ‘n’ roll to pop to hip-hop, leaping into musical comedy and more.

It is reported that Franklin had an octave range, which placed her alongside Minnie Ripperton. Her greatness as a musical performer astonished the audience at the 1998 Grammy Awards when she perfectly sang a tenor’s aria, “Nessun Dorma,” in place of the ailing Luciano Pavarotti.

In 2005, Franklin was awarded a Presidential Medal of Freedom by President George W. Bush, making her the youngest such recipient. This was followed by dropping her mink, belting her soul and bringing down the house.

At the inauguration of President Barack Obama, Franklin’s rendition of “My Country ‘Tis of Thee” stirred millions to tears, which is worth remembering and periodically replaying to consider what binds us as a nation. For that occasion, her high fashion in a gray cashmere coat and matching hat made a statement for the full-figured women of America, earning a place in the Smithsonian museum.

Her soulful rendition of the national anthem ranks with that of Whitney Houston, Ray Charles and others who didn’t have to take a knee. She had been on her feet at critical times, committed on the battlefield for the cause of equality and backing the civil rights work of Dr. Martin Luther King Jr.

During the very unpopular war in Vietnam, many black soldiers reported finding solace in her rendition of “Chain of Fools.” Looking around the political atmosphere of today, that song still resonates.

And yet her six decades of vocal instrumentation hearkened to better times. Aretha, in defining who we were as a people and what we should be to each other, appealed to the best within us.

When she sang “You Make Me Feel Like a Natural Woman,” it stirred something in all of us who believe in relationships that at times can be testy but ultimately are worth the effort. Knowing that long, blond hair didn’t fit many of us, she kept hers bold and natural.

In a world where women are being called profane names by rappers, and where we hear Snoop Dog throw around the n-word as if it were meaningless, Franklin’s vocal eloquence pleaded for just a little R-E-S-P-E-C-T. This is even more needed today. She took that Otis Redding song and made it an anthem for women.

For those who have been on the wrong side of unrequited love, her rendition of “Do Right Woman” hit where it hurts. Franklin appealed to the acceptance of personal responsibility for our plights — music for those who think their failures are usually someone else’s fault.

It’s for Detroit, L.A. and Chicago, where there is so much unrest among kids looking for answers in all the wrong places. Their failure to become educated, develop positive habits, become politically engaged through voting, and quit their abuse of people and substances is evident.

With her first pregnancy at the age of 12, abuse reportedly within church circles, fading loyalty from fans and alleged spousal battery, Aretha Franklin adapted and hopped in her “Pink Cadillac” to carve a niche. She went on the big screen for her foot-tapping steal-the-show performance for “The Blues Brothers” movie.

Though many call themselves “diva,” Aretha Franklin did not have to pretend, for she was truly the real thing, the Queen. She was the first woman inducted into the Rock and Roll Hall of Fame, and from her style and repertoire many took notes, took license and made themselves rich.

In the midst of it all, Franklin’s “Gospel Greats” took it on home, becoming one of the greatest and bestselling collections of a treasure that has its origins in the African-American experience.

Hopefully, her gospel album and greatest hits will be re-released, because my vinyl collection has seen better days, as likely have I — hoping for a resurgence of spirit to make us great again.