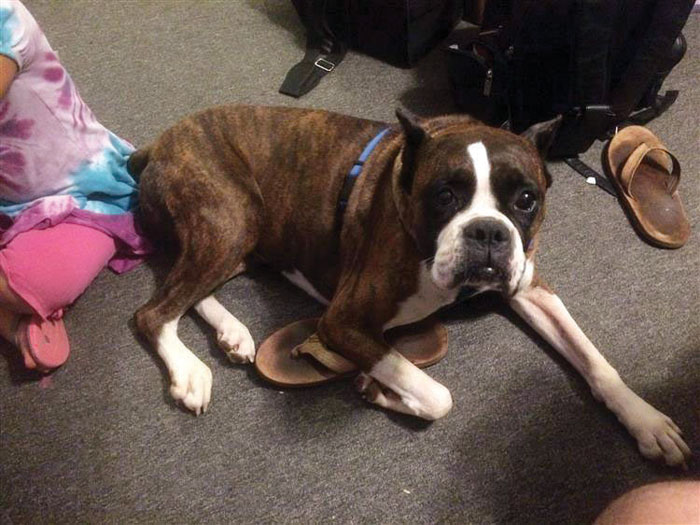 Sissy, a brindle and white boxer that was inside a truck stolen in Matthews and driven to East Spencer, was reunited with its owner only to die hours later. Authorities are trying to determine the cause. Submitted photo

The woman’s dog was inside the vehicle as it was tracked to East Spencer. The dog was found safe and returned to its owner, but it died later.

Authorities said if the dog’s death is determined to be related to the carjacking, the men arrested could face additional charges.

The carjacking was at 2 p.m. Wednesday in the 10400 block of East Independence Boulevard in Matthews near a Big Lots store. The woman walked to her Chevrolet Avalanche and put her dog inside. A man approached her with a knife, then took off with her truck, she told authorities.

The woman told police the vehicle could be tracked using her daughter’s Apple watch that was left inside. The device showed the vehicle moving along North Long and Shaver streets. About 6 p.m., it was found in the 200 block of Correll Street in East Spencer.

Two men were sitting in the vehicle when officers approached. The passenger, Curtis White, got out of the vehicle and spotted the officers, then got back into the vehicle. Both men were arrested.

Authorities said Camps tried to remove his handcuffs by moving his hands from behind his back to the front with the cuffs still on. He was inside an interview room and tried to lock deputies out, the said.

The dog, a brindle and white boxer mix named Sissy, was found safe and reunited with the owner. But Matthews Police Department officials confirmed Thursday afternoon that Sissy later died.

According to Tim Aycock, a public information officer with the Matthews Police Department, the owner allowed the dog’s carcass to be taken to Hoyle Griffin Laboratory in Monroe for testing to confirm the cause of death.

Aycock said if the cause of death has anything to do with the carjacking, the suspects could face additional charges including animal cruelty. The Matthews Police Department’s animal control unit also is investigating the dog’s death.

White has previous convictions for felony robbery with a dangerous weapon, assault on an officer, breaking and entering, crime against nature, possession of drug paraphernalia, larceny, and assault on a female.