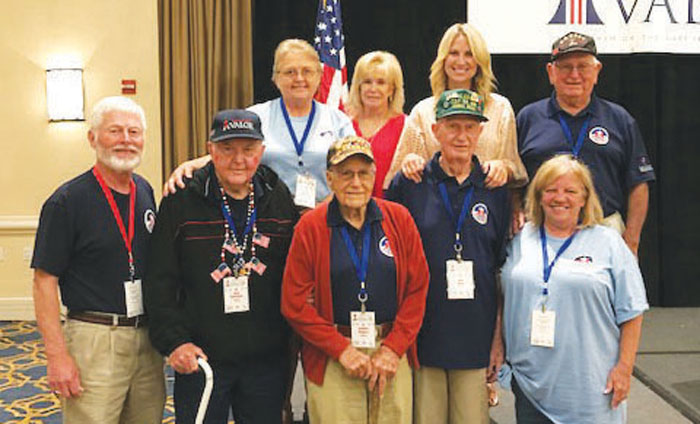 The veterans and their caregivers from North Carolina making the trip to New Orleans included in the front row Don Timmons, Ray Ketchie, Arthur Rogers, Jim Deal and Saundra Hoffner, and in the back row, Sue Harvell, Dianne Hall, Jordan Johnson andGlen Hoffner.

SALISBURY —  A small contingent of local military veterans and their assisting friends or family recently enjoyed an all-expenses-paid visit to the National World War II Museum in New Orleans.

The trip was made possible by the Gary Sinise Foundation, created by the actor who is probably best known for his role as Lt. Dan Taylor in “Forrest Gump.”

It’s a three-day experience in which the veterans are treated like royalty, as a way of saying thank you for their service and sacrifice for freedoms Americans enjoy today.

The veterans have big send-offs and greetings at the airports, receive police escorts in New Orleans, have dinner and entertainment at the museum, and stay at the Sheraton New Orleans Hotel.

They also have ample time to tour the museum.

They flew out of Charlotte with other World War II veterans from the Carolinas.

“The group had a ball,” said Hall, a Rowan County resident who was Rogers’ guardian for the trip. “It was so great.”

Hall is a member of the Elizabeth Maxwell Steele Chapter of the Daughters of the American Revolution, which serves veterans at the weekly coffee gatherings at Thelma’s restaurant in Salisbury.

Hall became acquainted with Rogers, a Navy veteran who also worked on the Manhattan Project during the war, at Richard’s Coffee House in Mooresville, where she also attends regularly.

“I just got fortunate to be asked to go with this veteran,” Hall said.

Hall said a highlight of the trip for her, beyond the museum itself, was getting to meet four-star Gen. Rick Lynch and his wife, Sarah.

The museum’s collections include more than 250,000 artifacts and 9,000 oral accounts from veterans that support the exhibits and research.