New helmet rules have Brady, at 41, planning for next season 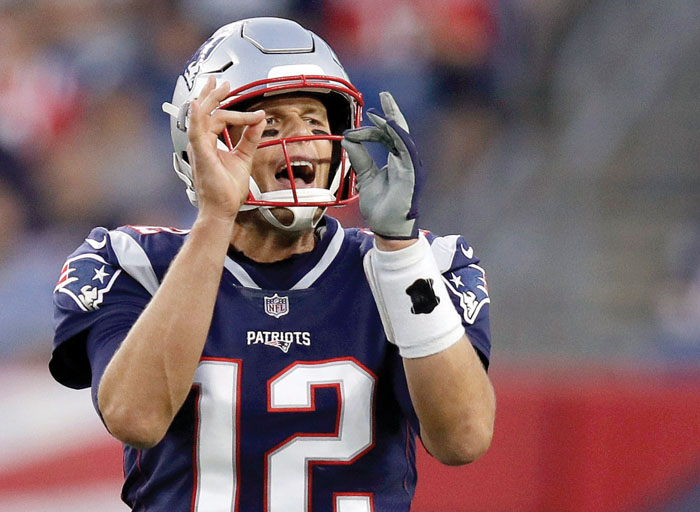 New England Patriots quarterback Tom Brady calls signals at the line of scrimmage during the first half of a preseason NFL football game against the Philadelphia Eagles, Thursday, Aug. 16, 2018, in Foxborough, Mass. (AP Photo/Charles Krupa)

FOXBOROUGH, Mass. (AP) — Tom Brady is breaking in a new helmet this exhibition season, yet another sign the 41-year-old quarterback is planning to play in 2019.

Brady’s old helmet is among the models being phased out by the NFL because tests showed it is not as effective at protecting against concussions. The new rules take effect next season, but Brady used a compliant helmet in last week’s preseason game against the Philadelphia Eagles instead of the one he has had through most of his NFL career.

Brady says he’s still tweaking the new model to make sure the mask allows for the same comfort and peripheral vision as the one he’s used to. The most visible difference for fans is that it has a panel in front instead of solid plastic.

The quarterback says he asked his teammates if he looked younger or faster in it. “They said yes, so I might keep it,” Brady says.

FLOWERY BRANCH, Ga. (AP) — There will be no leaping sideline catches, no end zone fade routes, no over-the-middle patterns for Julio Jones this preseason.

Fans hoping to see Jones in the Atlanta Falcons’ final two preseason games, including Saturday’s game at Jacksonville, better arrive early for pregame warmups. After that, the wide receiver will be a sideline observer.

Jones is feeling great, and coach Dan Quinn is trying to make sure that doesn’t change before the regular season. Barring a change of plans, Jones also will be held out of Atlanta’s final preseason game against Miami next week.

Jones said Wednesday he supports Quinn’s plan. He said he’ll be prepared for real games despite having no game-speed preparation in the preseason.

It’s not unusual for a key starter to have only limited exposure in the preseason. It was notable, however, when Quinn said Tuesday he plans to hold out Jones the full preseason.

A two-time All-Pro, Jones is one of only two players in NFL history to have at least 80 catches and 1,400 yards receiving in four straight seasons. He can break that tie with Marvin Harrison this season.

ADRIAN PETERSON READY FOR HIS NEXT MOVE WITH REDSKINS

WASHINGTON (AP) — Adrian Peterson believes he still has something left.

The 33-year-old running back had his first practice with the Redskins on Tuesday, a day after signing a one-year deal with Washington.

“I can give a lot. I really believe that,” Peterson said following his first practice. “I feel like the sky is the limit.”

Injuries and opportunity limited Peterson to 13 games over the past two seasons. He averaged 3.4 yards per carry in 10 games last season with the Saints and Cardinals.

Peterson remained on the sideline throughout the offseason waiting for the next opportunity, a scenario he admitted was “rough.”

“I know what I have left in the tank,” Peterson said.

Local attorney James Voyles issued a statement acknowledging the 80-year-old Lamey used “inappropriate” language during a conversation with a friend at a local radio station and apologized immediately.

“Bob does want to acknowledge that while repeating a story while off-the-air last week to a friend at a local radio station, he used an inappropriate word that had been used in the story,” Voyles’ statement read. “Bob immediately apologized to the people involved for the comment and would hope that this error in judgment would not tarnish his long-held reputation in the sports community where he has been known as an accurate and passionate reporter.”

Lamey was a sportscaster for WSOC-TV in Charlotte in the 1970s.

A report on a local television’s station website, WTHR.com, claimed an employee at Emmis Communications heard the comment and reported it to the radio station’s human resources department, which then contacted the Colts.

It’s not the first time Lamey’s words have caused controversy. But what happened last week the Colts found intolerable. The announcement of Lamey’s retirement after 31 years with the Colts came Sunday.

He was replaced on Monday night’s radio broadcast by Matt Taylor.

Initially, the Colts attempted to paint his departure as the celebration of a Hall of Fame broadcasting career that spanned five decades. But after word leaked about the conversation and Voyles issued his public statement Wednesday morning, the Colts immediately took a different tack.

“In regards to Bob Lamey … first and foremost, the Colts deplore and do not tolerate the use of any racial slur — in any context,” Colts chief operating officer Pete Ward wrote in an email. “Bob has had a long and storied history in our community, but he made a serious mistake.  The Colts are deeply disappointed the incident took place and offer our sincerest regrets to all who were impacted by Bob’s lapse in judgment.”

Ward went on to say that the Colts only decided to comment after Lamey made his account.

Previously, there had been praise for Lamey as his retirement was announced on the weekend.

“Bob Lamey is a legend and icon,” Colts owner Jim Irsay said in Sunday’s release. “(His) name is synonymous with Indianapolis Colts football.”

Former players weighed in, too, as Lamey said simply “it’s time” to retire.

Lamey’s previous outbursts included use of an expletive during a broadcast at the end of a Colts loss to the San Diego Chargers in September 2016. The next day he apologized to fans on the air and asked for their forgiveness.

He came close to uttering the same word during Indy’s come-from-behind win over New England in the 2006 AFC championship game after running back Dominic Rhodes lost the ball near the goal line.

“He fumbled the freakin’ football,” Lamey said before realizing teammate Jeff Saturday recovered it in the end zone for a touchdown.

There was another off-the-air outburst in December 2010 when Peyton Manning threw four interceptions in a loss to Dallas. Lamey privately questioned whether the NFL had “figured out” Manning and contemplated whether he should be benched in favor of backup Curtis Painter.

But his most recent comments were too much for the Colts.

“Bob publicly acknowledged that last week he repeated an inappropriate word when telling a story,” Ward wrote. “He immediately apologized to the people who heard him use the word, and then promptly retired as the Colts play-by-play announcer.”

He broadcast games for the city’s hockey team, the WHA’s Racers, from 1974-77 — finishing those duties just before Wayne Gretzky joined the team. He served as the play-by-play man for the Indiana Pacers from 1977-84, and he also was part of the Indianapolis 500’s radio broadcast team for years.

For 23 years, Lamey served as the sports director for WIBC radio, and in 2008, Lamey was inducted into the Indiana Sports Broadcasters and Writers Hall of Fame in 2008.

Taylor, who has done sideline and studio work for the team, had taken over as the Colts’ play-by-play voice on the preseason broadcasts. Greg Rakestraw, another local radio announcer, will replace Taylor in the television booth.