Friday Night Hero: Heavier Woodruff is out to terrorize QBs 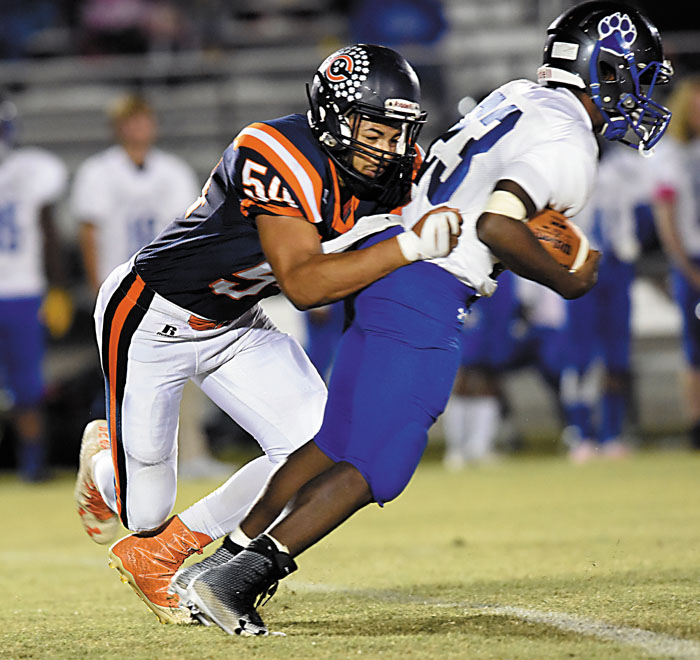 CHINA GROVE — Carson’s Teolyn Woodruff is this close to being called the complete package.

Last Friday, the senior defensive tackle dumped its contents all over South Rowan’s backfield in a season-opening 35-13 victory.

“I thought he played really well,” coach Joe Pinyan said after Woodruff and the Cougars passed their first road test. “At times, he seemed really excited. He was so active putting pressure on the quarterback, we had to take him out just to make him calm down.”

At 6-foot-3 and 230 pounds, the beefed up Woodruff plays with dilligence and determination. He spent the night shredding blockers, firing through gaps and spoiling South quarterback Drew Huffman’s varsity debut.

“Honestly, I just read my keys and went and got the quarterback,” said Woodruff, a second-year starter who is the definition of even-keeled away from the field. “I know we put pressure on him, made him nervous and made him hesitate. Their line was a little challenging, but we used our quickness off the line to beat them.”

Carson’s defense won more battles than it lost and Woodruff was a chief contributor. He recorded a first-quarter sack and finished with five solo tackles, three assists and four hits behind the line of scrimmage. Significantly, Carson forced three turnovers and limited South to just 98 yards rushing.

“What you saw were the effects of his off-season,” said Carson defensive coordinator Jason Stanley. “He’s spent literally every week in the weight room since last season ended. He was 198 (pounds) when he started and he’s 225-230 right now. He’s worked his butt off and gotten a lot stronger and faster. I believe he’s going to have a great season.”

Woodruff announced his intentions during South’s first possession. The Raiders had a first-and-10 from the Carson 27-yard line when he exploded through the line and wall-papered Huffman to the turf for a five-yard loss. “He was there all night,” a weary Huffman said afterward. “Especially, when I was just sitting in the pocket, trying to look downfield.”

“It was mostly just maintaining pressure on them,” Woodruff said. “Once we got the lead, we forced them to do some things that maybe they didn’t want to do.”

Things like fumbling the ball into the end zone with 25 seconds remaining in the first half. And things like throwing an ill-advised interception on a third-quarter fake punt. And finally, things like launching a pass 40 yards downfield in the waning moments that was easily picked off by Carson’s Gavin McCulloh.

“I remember when Thairell (Parks) got his interception in the third quarter,” Woodruff smiled. “We all just yelled ‘Money.’ That’s a thing we do on interceptions. It’s money for us because it costs the offense.”

Woodruff has yet to draw much attention from college recruiters, but Western Carolina and N.C. A&T State have expressed interest. He’s hoping his size, length, strength and quickness will push him into the spotlight.

“I’ve always wanted to play college football,” he said. “If I do, I’ll be the first in my family. I think it’s just a matter of working hard, learning from my mistakes and continuing to get better.”

Stanley thinks it’s starting to happen. “Last year, (Woodruff) got a lot of hurries and effected a lot of throws,” he said. “This year, because of his increased size and speed, he’s actually getting to the quarterback more. He’s making plays rather than just effecting them.”

Stanley also feels becoming a college player is a powerful inspiration for Woodruff.

“For him, college is going to be the motive,” Stanley said. “He’s got all the tools to play at the next level. It’s going to be the small things like keeping his pads down and not taking plays off late in the game when he starts getting tired. He’s got to keep pushing through those walls. If he can do that — every snap, every game — I absolutely think he can be a college player.”