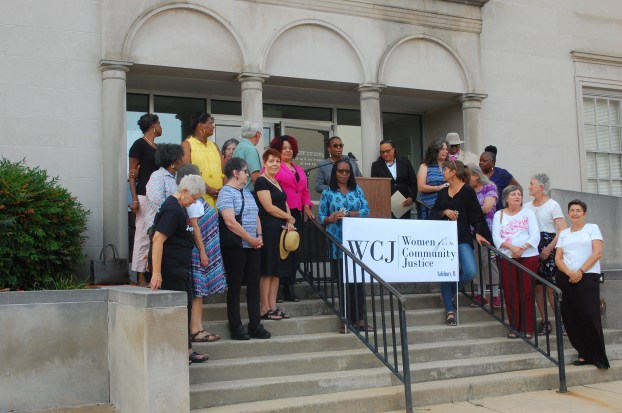 Regina Dancy calls for civility and respect among city council members during a Women for Community Justice press conference on Aug. 20.

Laurels to Salisbury City Council for needing no reminders about being civil during its meeting Tuesday. The city has been navigating sensitive issues lately, starting with a resolution of reconciliation related to a 1906 lynching, first considered two weeks ago. Since then, vandals have thrown paint on the Confederate monument and KKK flyers have surfaced in a neighborhood.

Mayor Al Heggins wisely took a step back from the resolution this week, assigning it to Actions in Faith and Justice, the group that held an event on the lynching’s anniversary. Harmony on the council would get a big boost from including other council members in important committee work like this instead of relying on outside groups. After all, council members are the ones who will cast the final vote.

The mayor and the rest of the council should learn to work together instead of trying to work around each other.

Dart to the audacity of criminals like those who broke into an Earnhardt Road home recently. According to the Rowan County Sheriff’s Office, two men from Charlotte targeted this local home as a place from which they could steal valuable goods last Friday. What they didn’t prepare for, however, were security cameras inside and outside the house. The victim of the break-in called authorities and gave a detailed description of the suspects while they were still in the house. Patrol deputies quickly responded and eventually caught up with the fleeing suspects, who had taken electronics, firearms and jewelry.

The thieves are lucky that the homeowner didn’t do the same thing that Alan Corder, owner of American Beauty Garden Center in Charlotte, did on Aug. 6. He saw via surveillance camera that someone was breaking into his business. Corder went to the store after calling 911 and, when the suspect ran out toward him, shot and killed the 20-year-old robber. Corder has been charged with voluntary manslaughter.

Thieves should be on notice. Homeowners and business owners are keeping an eye on their property, and they might be armed.

Laurels to Kelly Withers, principal of South Rowan High School and now twice-named Principal of the Year in the Rowan-Salisbury system. Withers was principal at Carson High when she first won the honor in 2011 and went on to be named Regional Principal of the Year. A living example of how talented and valuable lateral entry teachers can be, Withers left a hospital job in medical technology to teach biology at West Rowan High School. Her “students first” motto has carried her and her schools far. Congratulations, Principal Withers.

Would you like ensure equal opportunity for all children? If so, help struggling students achieve more in school, and provide... read more