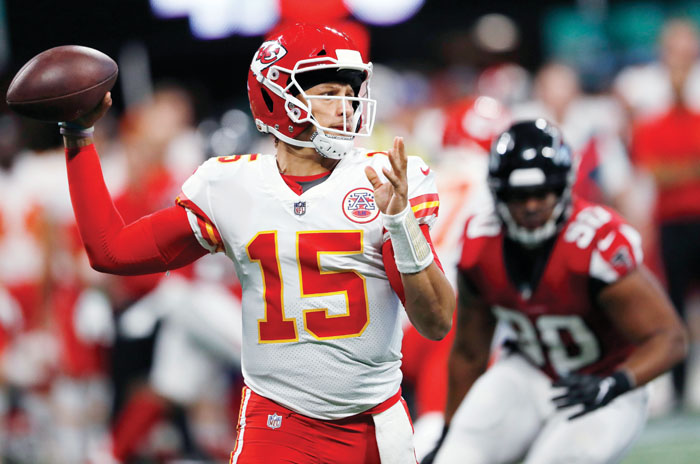 KANSAS CITY, Mo. (AP) — It is already being called “The Pass” in Kansas City.

It happened early in the Chiefs’ game against the Atlanta Falcons, when Patrick Mahomes II dropped back to throw. The pocket began to collapse around him, so Mahomes took a couple jitterbug steps forward and let loose with a 69-yard heave that Tyreek Hill caught nearly in stride for a touchdown.

The ball traveled almost the entire distance in the air.

Immediately, the pass began trending on social media. Four days later, it was still being discussed on local sports talk radio. It had turned into memes blazing trails across the internet.

Just imagine if it had happened in a game that counts!

“I underthrew it, to be honest,” Mahomes said with a wry smile. “Tyreek outran it. If you have guys like that, that much speed, you just try to get them the ball and make plays.”

Yet there are few quarterbacks in the NFL capable of making that particular play.

It takes the kind of arm strength few possess, and the kind of vision to spot a streaking wide receiver 50-odd yards downfield. It takes the confidence to step up in a pocket rapidly filling with big, bruising bodies, and the discipline to deliver the pass while taking a hit.

Chiefs coach Andy Reid was asked Tuesday whether he could remember any similar throws, and only two came to mind. The first involved then-Packers quarterback Brett Favre, with whom Mahomes has drawn plenty of comparisons, and a long touchdown toss to Sterling Sharpe against Detroit. The second involved the Eagles’ Donovan McNabb, who hit DeSean Jackson in a Monday night game against Dallas.

Maybe that one came to mind because Jackson dropped the ball in celebration before crossing the goal line, nullifying the touchdown. Then again, maybe it was the sheer audacity of the throw.

Nor do their big arms always translate to big success.

JaMarcus Russell had otherworldly arm strength when he was drafted by Oakland, but he was never able to harness it in the NFL. Another ex-Raiders quarterback, Jeff George, had a massive arm but only made two playoff appearances. Jim Hart parlayed his cannon into a long career with the Cardinals, but he never managed to win a playoff start, in part because of a weak supporting cast.

More often than not, though, arm strength has been a key ingredient to some of the most productive passers in recent history, especially as the NFL has become a quarterback-centric league.

Favre, John Elway and Dan Marino, and more recently Tom Brady and Aaron Rodgers, have all possessed the kind of arm it takes to fling the ball downfield as pockets are collapsing.

Hill, who is near-universally recognized as the NFL’s fastest player, said that “Pat is the first guy that I’ve played with that has the arm strength” to hit him in stride. “That’s not taking anything away from other quarterbacks I’ve played with,” he added, “but Pat is something special.”

Johnson played in more games (143) than any Carolina defensive lineman. He spent all 11 seasons with the Panthers, recording 67 ½ sacks, 20 forced fumbles and 12 multi-sack games before being released by the team in February.

Johnson had a franchise playoff record three sacks in the team’s run to Super Bowl 50 in the 2015 season.

He started 11 games last season but his production fell off. Johnson failed to record a sack and had just 16 tackles.