Rowan-Salisbury Schools names Teacher and Principal of the Year 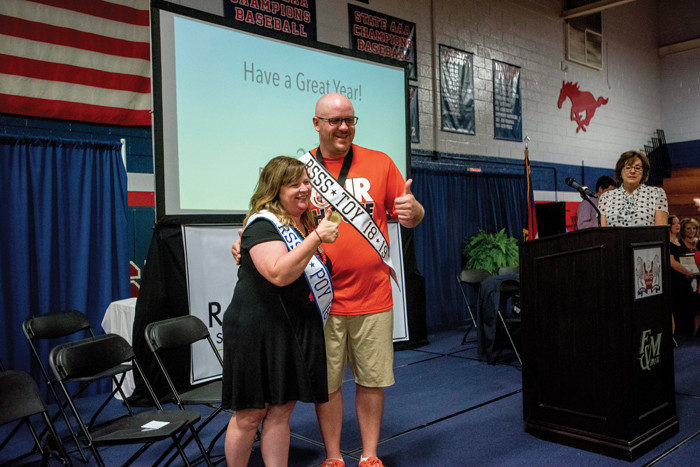 GRANITE QUARRY — The 2018-19 Teacher and Principal of the Year accepted their awards with tears and gratitude Tuesday.

“This year has been a whirlwind of excitement and opportunity,” she said.

Overcash said he was surprised and excited to be selected Teacher of the Year. Overcash, who teaches freshman math at Carson High, said he always tries to make his lessons fun and unique.

“It’s a little different when you walk in the door,” he said of his class. “A lot of kids walk in with a negative view of math, and I try to change their minds 45 minutes at a time.”

Overcash uses rap, hands-on activities and games like “Bungee Barbie” to help students fall in love with an oft-maligned subject.

Angelo DelliSanti, principal of Carson High, said Overcash has a passion for his job that shines through in everything he does. Overcash is a teacher who not only wants to see his students succeed but also wants them to believe that they can as well, DelliSanti said.

“I really believe that we are working in the best district in the state,” she said Tuesday.

And with district renewal breaking ground, Withers said she thinks Rowan-Salisbury is on its way to being the best school system in the nation.

In addition to his award, Overcash received a $1,000 check for his classroom from Rowan Partners for Education and a vehicle from Gerry Wood Honda that he can use for the duration of the school year.

Overcash is now in the running for Regional Teacher of the Year.