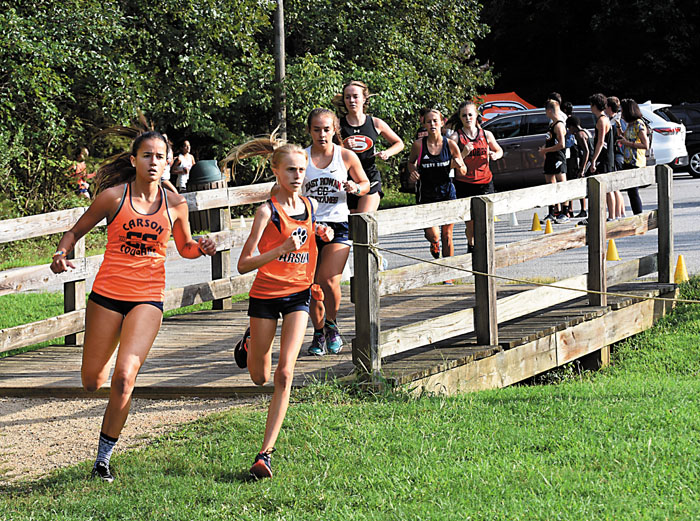 SALISBURY  — Carson freshman Abby Lee was nervous at the start, nervous in the middle and nervous at the end, but she showed the way in Wednesday’s pre-county cross country meet at Dan Nicholas Park.

Lee fought off the jitters, the mosquitos and the August heat to lead the Cougars to a team victory.

“First high school race, so I was pretty nervous the whole time,” the 14-year-old said. “I’d only been on this course once before, but, fortunately, everything was well-marked.”

While fans didn’t have to wait long for Lee to reach the finish line in a winning time of 20:16, Carson coach Les-Lee Ihme has been waiting for her for a few years.

“She’s been really good at Southeast Middle School in a lot of events, from distance running to the mile and the 800,” Ihme said. “The sky’s the limit for her as a runner. She’s never really had anyone running with her, so she’s always had to set her own pace. She was worried about the pace today and was worried about running out front on an unfamiliar course. I told her to just run her own pace, and she did a great job of it.”

Carson has won three of the last four county championships and appears to be a heavy favorite to take another one.

Lee got help from Carson veterans such as junior Taylor Conrad. Conrad, who finished third, walked the course with Lee prior to the race.

“There were some pre-race things that I used to do with Taylor Wiggins before she graduated,” Conrad said. “I tried to do those things today with Abby.”

Conrad experienced hip and back injuries this summer, but she’s healthy now and was able to run 21:30. She was runner-up  in the county championships last fall.

“Lani did mostly basketball this summer, so she’ll get faster,” Ihme said. “Kimberly and Megan really came up big for us.”

South lost defending county champion and cross country runner of the year Madison Lowery, whose family moved to Gastonia in June. Lowery will be boosting the fortunes of the Forestview Jaguars this year.

Had Lowery been in the lineup, the Raiders would have been winners on Wednesday.

“It was tough losing a runner like Madison Lowery, but it’s just one of those things you can’t control, and we wish her the best,” South coach Rebekah Julian said. “If we still had her, we’d be a dominant team this year, but we can still be  good. The girls have pushed themselves. We’ve got a small school, so most of them play more than one sport, but we were able to schedule some summer country workouts around those other things.”

South will be competitive because it also has a special freshman — Bethany Rymer. A future basketball standout for the Raiders, she ran 21:12 for second place. Soccer phenom Madison Henry (fifth), Madison McGuire (seventh), Anahi Reta (11th) and Zoey Nichols were South’s other scorers.

Adalie Harrison, an East Rowan basketball player who won the pre-county meet a couple of years ago, is making a cross country comeback. She finished eighth to pace the Mustangs. Grace Faller was 14th.

Salisbury only had four runners and couldn’t post a team score, but it had two of the best participants. Leah Cressler was fourth, while Ellen Simons was sixth.