NFL: Some old guys to watch this season 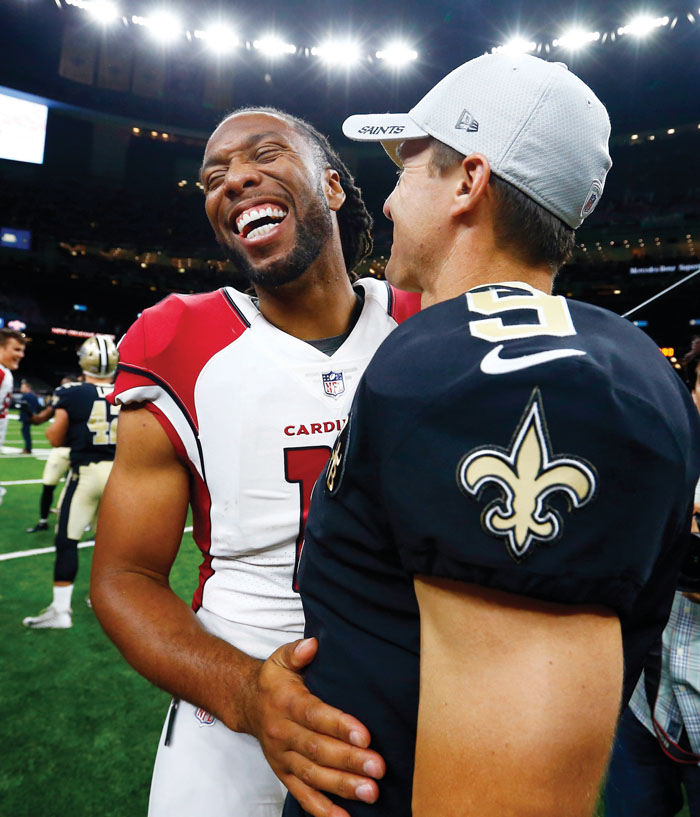 AP Photo/Butch Dill ... Arizona Cardinals wide receiver Larry Fitzgerald laughs with New Orleans Saints quarterback Drew Brees (9) in the second half of last Friday’s NFL preseason game in New Orleans, The Cardinals won, 20-15. At 39, Brees is one of the older players in the league. Fitzgerald will be 35 next week.

Anyone who pays attention to the NFL knows that Tom Brady is 41 as he heads into the season. He’s hardly the only geezer, in football terms, still on the field or hoping to be when the season kicks off next month.

Indeed, Brady isn’t even close to the oldest guy suiting up these days. His former teammate in New England, Colts kicker Adam Vinatieri, is 45.

There are plenty of players currently on rosters who are older than Rams coach Sean McVay, now 32. Hey, that’s in the midst of the prime competing years for most positions.

Here’s a look at six 30-somethings who could be impactful this season. We’re steering away from the kickers, who tend to age a lot more slowly than anyone else.

Drew Brees, Saints quarterback — There are no signs of Brees slowing down at age 39. He’s in the perfect offense, which he knows so well he could probably run it from a rocking chair.

Helping mightily are skill position players such as Alvin Kamara, Mark Ingram when he returns from a four-game suspension for violating the NFL policy on performance-enhancing substances, Michael Thomas, Ted Ginn Jr., and Benjamin Watson (37 himself).

Also aiding Brees: A defense can’t throw anything at him he hasn’t seen — again and again.

“I understand that I don’t have a whole lot of time left,” says Brees, who’ll be 40 in January and whose contract expires after the 2019 season. “You’ve got to work and have high expectations and sacrifice and do maybe even more now than I ever have.”

Andrew Whitworth, Rams left tackle — Whitworth was a stud for Cincinnati for 11 seasons, but the Bengals must have believed he was through in 2016 because they let him walk as a free agent. Now 36, he comes off an All-Pro first year in which the Rams were dominant on offense.

Despite all those years in the trenches, Whitworth looks as sharp and powerful as the day he came out of LSU in 2006. He has a shot at his first Super Bowl with a supremely talented roster around him.

Julius Peppers, Panthers defensive end — Like Brees, Peppers will someday wind up with a bust in Canton, Ohio. At 38, he’s no longer an every-down player, but he’s an every-day leader.

Peppers can provide ample force as a pass rusher if he’s mixed in efficiently, something Carolina is quite good at with its D-line. That’s essential in the league’s best division, facing Brees and Matt Ryan twice a season.

Peppers was placed on the physically unable to perform list in July, but the Panthers don’t seem too concerned about his availability — or production — when the games count.

Terence Newman, Vikings cornerback — Now this is really impressive: a DB who will be 40 before the season kicks off, yet can handle the speed- and agility-based duties in an increasingly fast-paced game.

Newman enters his 16th pro season — he was the fifth overall selection by Dallas in 2003 — and this will be his fourth year in Minnesota. The league’s oldest defensive player likely will see some time at safety on a game-changing defense. To see any time at all in an NFL secondary at such an advanced age is stunning.

“You have to figure out something else that you want to do, once you get to my age,” Newman said when he re-signed in May. “I think this will be my last year. No matter what happens, this will be it for me.”

Vernon Davis, Redskins tight end — Once among the elite tight ends of the NFL, Davis remains at 34 enough of a force on the field and a positive influence off it to be a factor for Washington. He averaged 15.1 yards a reception for the Redskins a year ago, third best in his distinguished career.

L.P. Ladouceur, Cowboys long snapper — At 37, this is his 14th year with the Cowboys; how many fans would recognize the Canadian in Big D without his jersey on?

Long snappers always are unsung, fitting the cliche of only getting noticed when they mess up. Ladouceur almost never does, and he’s now the longest-tenured Cowboy with Jason Witten retired.

Moore was ticketed by North Carolina State Highway Patrol on Aug. 10 just before 3 a.m., shortly after the team returned from its preseason game against the Buffalo Bills. Moore was on his way home and was cooperative with state troopers.

Rivera said Moore informed the team immediately of his mistake and was remorseful.

Rivera said Tuesday it’s an opportunity for Moore — and the other young players on the team — “to learn and realize you have a responsibility to the community.”

Moore has a court date set for October.

KALIL  IS 3RD PANTHERS OFFENSIVE LINEMAN TO INJURE HIS KNEE

CHARLOTTE (AP) — Carolina Panthers left tackle Matt Kalil has undergone arthroscopic surgery on his right knee and will be re-evaluated on a weekly basis.

The team said Kalil traveled to Florida on Monday for a second opinion on his knee from Dr. James Andrews and the decision was made to have the procedure.

Kalil becomes Carolina’s third starting offensive lineman — and the second tackle — to go down with a knee injury.

The Panthers lost right tackle Daryl Williams, a second-team All-Pro in 2017, to a torn medial collateral ligament and dislocated patella and guard Amini Silatolu to a torn meniscus. There is no timetable for their return.

SCOTTSDALE, Ariz. (AP) — Former NFL offensive lineman Richie Incognito bonded out of an Arizona jail Tuesday after being arrested on charges he threatened to shoot employees of a funeral home a day earlier, authorities said.

Police in the Phoenix suburb of Scottsdale said Incognito had been booked on suspicion of misdemeanor charges of threats and disorderly conduct.

Incognito, 35, posted a $20,000 bond. He has an Aug. 27 pretrial conference in Scottsdale Municipal Court. It was unclear Tuesday if Incognito had a lawyer who could speak on his behalf.

Police said Incognito was at the Messinger Pinnacle Peak Mortuary on Monday to make arrangements for his father, who died last weekend.

“Incognito reportedly was upset with staff and began to damage property inside the business and shout at employees,” said Sgt. Ben Hoster, a police spokesman. “At several points during his contact with staff, Incognito threatened to retrieve guns from his vehicle and return to shoot the employees.”

A police report showed officers later executed a search warrant on Incognito’s pickup truck and seized two Glocks, three rifles and a silencer for a handgun.

The report also said Incognito’s family had told him he wasn’t going to be allowed to attend his father’s funeral and he had been acting erratically.

Witnesses at the funeral home told police that Incognito wanted them to cut his dead dad’s head off for research purposes and Incognito punched caskets, threw pamphlets around and took an urn from a shelf and slammed it down on top of a casket.

Incognito attended a Phoenix-area high school before playing college football at Nebraska and having an 11-year NFL career with St. Louis, Miami and Buffalo.

He was released by the Bills three months ago from the reserve/retired list, making him an unrestricted free agent.

Incognito was suspended by the Dolphins in 2013 for bullying a teammate and arrested last May in Florida for allegedly throwing a dumbbell and tennis ball at another gym patron.