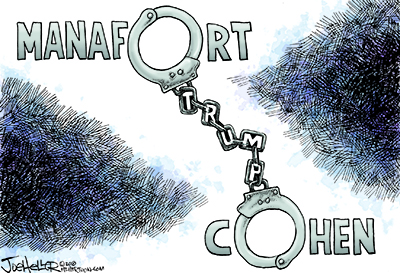 Margaret Sullivan: This is the moment all of Trump’s anti-media rhetoric has been working toward 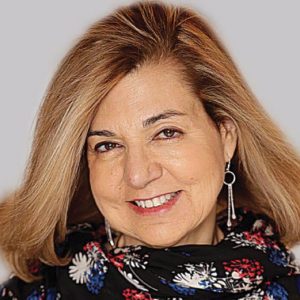 Don’t believe your eyes and ears. Believe only me.

That has been President Donald Trump’s message to the public for the past two years, pounded in without a break: The press is the enemy. The news is fake.

In raucous campaign rallies, in lie-filled Fox News interviews, through dissembling surrogates such as Kellyanne Conway and Rudy Giuliani and Sarah Huckabee Sanders, Trump has done his best to prepare the ground for a moment like Tuesday afternoon.

It arrived with an extraordinary bang. Within an single, frantic hour, the world learned that Trump’s former campaign chairman, Paul Manafort, and his former personal lawyer, Michael Cohen, had become felons. Trump himself was implicated in Cohen’s crime.

It was hard not to think about key moments of the Watergate scandal, not long before Richard Nixon’s disgraced resignation from the presidency.

But in a divided, disbelieving nation, will this really turn out to be the epic moment it looks like?

Or will Trump’s intense, years-long campaign to undermine the media – and truth itself – pay off now, in the clutch?

After all, this ugly saga will reach its resolution in the court of public opinion, as political matters often do: in the midterm elections, in the will of Congress, in the ways that citizens talk to their representatives in their home districts.

“If what we learned today doesn’t matter to people, what will?” asked Chris Cuomo on his CNN show.

It’s an excellent question, and the answer may be “almost nothing.”

Trump, at a gut level, understands this better than anyone. He knows what he can get away with.

Not only did he famously predict during the campaign that his political base would stand by him if he shot somebody on Fifth Avenue, he has already survived far more than any other candidate or president could have:

His taped voice bragging about sexual assault. His mocking of a disabled reporter. His disparagement of a Gold Star family. His reported dissing of “shithole countries.” His scandal-filled administration. His thousands of documented falsehoods.

For all of this, and much more, he has blamed the messenger: the nation’s press.

And the anti-media message certainly has sunk in. One public opinion poll last fall reported that almost half of Americans believe journalists simply make things up about Trump. A more recent one said that more than 2 in 5 Republicans would shut down news organizations they disapprove of.

So why should people believe now? Or even if they do believe, they may fail to take it seriously. They may simply go to work. Make dinner. Crack open a Budweiser and flip on the TV. And of course, not only is the nation divided and disbelieving, it is easily distracted.

Novelist Elinor Lipman, who tweets a daily current-events verse, often in Trump’s voice, responded to Tuesdays news: “Who me? I CANNOT be indicted/So why is everyone excited?/I’ll make these headlines go away/Stayed tuned: I’ll start a war today.”

And, regrettably, the press itself – maligned and beaten up as it is – nevertheless is Trump’s invaluable partner in distraction.

It is prone to normalizing even the most bizarre behavior, trumpeting his spin, failing to follow up aggressively (North Korea denuclearization, anyone?) and insisting on giving precious airtime to proven liars.

Trump denied even knowing about it. He blamed the usual suspects. He changed the subject.

In the days ahead, the news media must move beyond this exciting moment – a moment that so far has had the biggest impact on journalists themselves and a few political insiders. (As well as the newly minted felons, of course.)

They must explain and clarify, get the importance of the moment across, resist being distracted and manipulated. Keep reporting.

Journalists can’t change the minds of those most firmly in Trump’s camp, those who have decided to believe only him. That’s a lost cause, and not our mission anyway.

But they can stop allowing themselves to be used as tools in Trump’s relentless – and successful – campaign to undermine the truth.

And do so knowing that it may be too late.

Margaret Sullivan is The Washington Post’s media columnist. Previously, she was the New York Times public editor, and the chief editor of the Buffalo News, her hometown paper.

Would you like ensure equal opportunity for all children? If so, help struggling students achieve more in school, and provide... read more