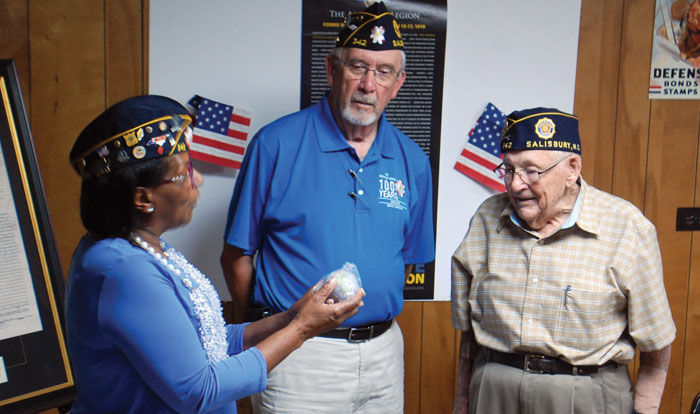 Queen Williams, historian for Harold B. Jarrett Post 342 in Salisbury, presents a baseball to Jack Kepley, far right, that came from the 2018 American Legion World Series in Shelby. Looking on is present Post Commander Charlie Frick. Kepley is the only surviving charter member of the post, which was established Sept. 18, 1946. Mark Wineka/Salisbury Post

SALISBURY — Jack Kepley and some of the other World War II veterans from the Chestnut Hill area of Salisbury were standing around drinking Cokes, waiting for a Fourth of July welcome-home parade to commence in 1946.

“We ought to start an American Legion,” one of the Chestnut Hill guys said.

It was as simple as that. As Kepley recalls, there were about 100 veterans milling about, getting ready to march in the parade. Many in the group thought southern Salisbury should have a legion post, and word spread quickly.

In the summer weeks to come, several informal discussions were held at Doc Peeler’s Drug Store on South Main Street.

Salisbury Cotton Mill then offered up its community building at Ryan and Boundary streets, not far from today’s Rufty-Holmes Senior Center. The first organizational meeting was held there Sept. 2, and by Sept. 18, 1946, 92 men had signed the charter for the new post.

By vote, Bill Godlewski, who lost both hands and parts of his arms in the war, was designated as the first charter member. Jack Kepley was among the 92 original members.

“Three-quarters of the guys were personal friends of mine,” says, Kepley, who at 94 is the only surviving charter member.

In all the meetings leading up to the charter, several names of local men who had distinguished themselves and were killed in World War II were considered as names for the new post.

But one stood out. After secret balloting, Post 342 was named for Harold B. Jarrett.

As part of Post 342’s continuing celebration of the American Legion’s 100th anniversary, Kepley spoke at Monday’s post meeting and reminisced about its beginnings and Jarrett, a man he knew.

Kepley is best known in Salisbury as someone who has been involved in Scouting for 81 years. He has earned the highest honors in Scouting, all from his association with Troop 448 of Coburn Methodist Church.

Kepley told the Post 342 members that their post namesake “was a wonderful  guy.” Jarrett and Kepley attended the same church, and Jarrett was the Scout troop’s assistant Scoutmaster when he left to serve in the war.

Jarrett entered the Army on April 17, 1942, completed his basic training at Fort Bragg and sailed across the Atlantic on Aug. 1, 1942, as part of Company C of the 601st Tank Destroyer Battalion in the 3rd Infantry Division.

Kepley said Jarrett’s battalion waged campaigns in North Africa, Italy and southern France — fighting the same battles and making the same landings as the famed Audie Murphy, who belonged to the 15th Regiment of the 3rd Division.

Jarrett, a tank gunner, distinguished himself and received the Bronze Star in the battle of El Guetar in Tunisia.

On March 23, 1943, Jarrett’s tank destroyer was hit by a powerful German attack. With his assistant gunner wounded, Jarrett kept firing and knocked out three enemy tanks before another shell hit his tank destroyer and set it on fire.

“He requested transfer to another, where he assisted in the destruction of several other enemy tanks,” the citation for his Bronze Star read.

Jarrett later was with the 3rd Infantry Division on the Anzio beachhead and moved with the 5th Army into and north of Rome.

Jarrett received the oak leaf cluster to the Bronze star for his actions June 1, 1944, when he volunteered to locate enemy weapons in Italy that were inflicting significant casualties among the U.S. infantry, which was supported by his tank destroyer.

According to citations, Jarrett covered 1,600 yards during 45 minutes of reconnaissance by himself to discover enemy positions.

Kepley said Jarrett was with the invasion forces that landed in southern France Aug. 15, 1944, and Jarrett was killed Aug. 19, 1944, by German 88 artillery during a battle at Brignoles.

Jarrett had risen to the rank of sergeant. He was 24 at this death.

Kepley recalled that Jarrett was buried initially in a military cemetery in France. The Salisbury Post reported in its May 2, 1945, edition that Harold’s brothers, Norris and Charles, met at his graveside in France on April 8, 1945.

Norris and Charles also were in the Army, and all three brothers were Boyden High School graduates and had worked at Salisbury Cotton Mill before going into the service.

In the late 1940s, Harold B. Jarrett’s remains were shipped home, and they were interred in Salisbury National Cemetery, Section B, No. 722. Kepley passed around a photo of Jarrett’s marker in the cemetery.

The American Legion post named for Jarrett kept meeting at mill’s clubhouse, but Kepley said membership grew substantially in the 1950s, forcing the Legionnaires to build the present-day building on Lincolnton Road.

The lot the legion building is on was sold to the post by Kepley’s grandfather.

During the war, Kepley served in an Army tank company in the South Pacific, where most of his company’s work involved making beachheads. About a third of his outfit lost their lives, Kepley said.

He also was part of the occupational forces in Japan until he returned home.

Kepley said he held every office in Post 342 except commander. When the year arrived for him to take that position, Kepley was trying to start his own insurance agency, and, “I was stretching myself too thin,” he said.

Kepley, a recent recipient of the Order of the Long Leaf Pine, has been heavily involved in many other community activities beyond Scouting and the American Legion. Among those interests are Coburn Methodist, the 40 and 8 Club, Shriners and Lions Club.

He also has been an auxiliary law enforcement officer in the past. But it’s Scouting for which Kepley is known best.

Kepley usually has a stock answer when people ask him how he stays so active at his age.

‘A space we can call our own’: Veterans Honor…