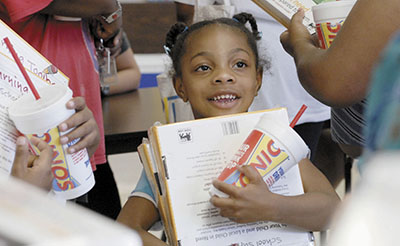 Nex-Zaria Gholston, 5, holds onto her two Learning Toolboxes that she got from the Communities in Schools distrbution day in 2005. Photo by Jon C. Lakey, Salisbury Post.

Would you like ensure equal opportunity for all children? If so, help struggling students achieve more in school, and provide a safe environment where they can thrive and grow.

Two stories about such efforts appeared in Tuesday’s Post. First, the Communities in Schools organization kicked off a new school year at a breakfast on Monday. Operating in Rowan County for two decades now, the organization’s goal is to surround students with a community of support, empowering them to stay in school and achieve in life. One of CIS’ key elements is a personal, one-on-one relationship with a caring adult who will be a tutor, mentor or lunch buddy — roles that take only an hour a week of a volunteer’s time. That’s not much to ask.

CIS has a proven track record. More than 88 percent of the children involved in the program last year improved their school attendance, 70.1 percent improved their behavior and 91.9 percent showed improvement in their school work. The more students can get this kind of opportunity, the better.

The public schools, which resume classes Monday, need and deserve community support. As Nelson Mandela said, “Education is the most powerful weapon in the fight against poverty.” Strengthening our public school system helps everyone.

Also in the news this week are new indictments for a drug-trafficking ring that was operating out of a home in Rockwell. Authorities are aggressively pursuing people who make and sell meth, cocaine and heroin to put these criminals behind bars and out of business.

What could drug arrests have to do with equal opportunity for children? Drug abuse is far from a victimless crime. Addicts have children, too, and growing up amid such instability and desperation can impair a child’s development.

“Those addicted tend to live in communities, some rural, some urban, stressed by low education, low employment and financial strain,” a 2016 article in Psychology Today said. “When opioid addiction clusters, it can be self-reinforcing, as victims are part of networks of other users.”

Meanwhile, addicts’ children grow up to be users themselves. The community has a stake in slowing the flow of illegal drugs into the community and prosecuting the people who profit from this trade.

The same goes for the gun violence that plagues the city. Children cannot feel secure when they hear gunshots night after night and learn about people killed in their own communities.

A good education and a safe community should be rights — as fundamental and inalienable as life, liberty and the pursuit of happiness.