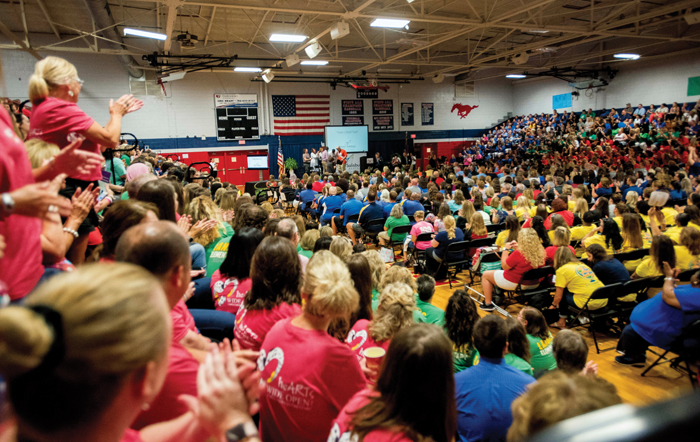 GRANITE QUARRY — Teachers kicked off a new school year with a bash Tuesday at a districtwide Back to School Conference. More than 1,000 teachers and other educators poured into the East Rowan High School gymnasium to learn more about becoming a renewal school district and to get in a mindset of learning.

But Tuesday morning, educators were curious about what it will mean to be a renewal district — a school system with charter-like flexibilities. Rowan-Salisbury Schools is the first district in the state — and perhaps the nation — to be granted the opportunity. According to administrators and elected officials, it will be a voyage of discovery.

“I wish I could tell what it means, what it’s going to look like in every school, but I don’t know that,” said Josh Wagner, chairman of the Rowan-Salisbury Board of Education.

While the task of restructuring a school system seems daunting, a design that puts teachers in charge of any changes will lead to better outcomes for students, he said.

“You are the ones that are carrying the weight of what we do every day,” Wagner said.

He encouraged teachers to be present, be patient and be proud — though he added that being proud does not mean following blindly.

Superintendent Lynn Moody took time to explain in detail what it will mean to be a renewal district. While districts across the state and country have long been asking for charter-like freedoms, Moody said, she believed Rowan-Salisbury Schools got the chance because of its reputation for innovation and because several other things fell into place.

“Sometimes you are in a special place, at a special time, with special people,” she said.

The next few years will be full of uncertainty as the district blazes a path in education, but behind that fear is excitement, she said.

“It might just be the start of something special, and I think it will be,” Moody said.

The freedoms afforded by renewal mean that Rowan-Salisbury now has local control over its calendar, staffing, curriculum and budget. The district plans to use 2018-19 as a planning year, with any changes implemented at the beginning of the 2019-20 school year.

Most of the changes will be led by teacher-led design teams at each school. The teams met for the first time Thursday. Moody said the groups brainstormed and cast unofficial votes on changes they’d like to see. Nothing will be approved until it goes before the Board of Education, but Moody said she is certain change is coming.

“You can pretty much be sure that our calendar will look different next year,” she said Tuesday.

On Thursday, teachers and school administrators by and large said they’d like to do away with a traditional school calendar and instead move to either the same calendar as Rowan County Early College and North Rowan High School or to break ground with a year-round calendar.

When Moody told Tuesday’s crowd that the teams unanimously voted to ditch N.C. final exams and the kindergarten assessment and to fight to decrease the number of end-of-grade and end-of-course tests, the gym was filled with claps and cheers.

“The only thing that will motivate you is your dreams,” she said. “I dream about working in a school district where our only goal is to inspire our children.”