Bryce Love hears the call of another season at Stanford 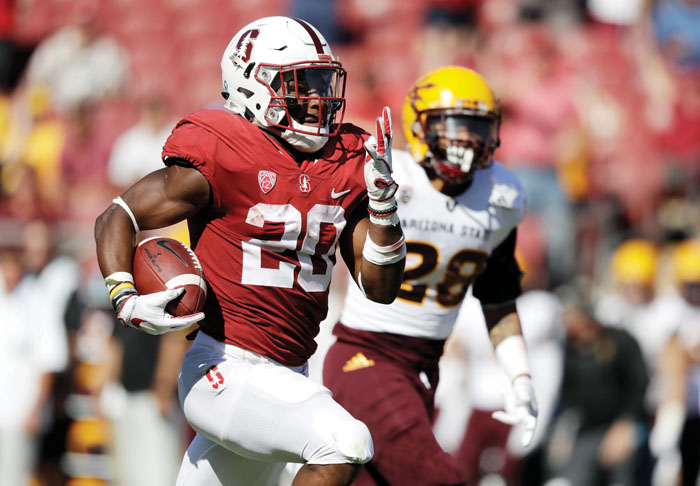 FILE - In this Sept. 30, 2017, file photo, Stanford running back Bryce Love, left, runs for a touchdown past Arizona State defensive back Demonte King (28) during the third quarter of an NCAA college football game in Stanford, Calif. Love's unusual decision to return to school following a 2,000-yard rushing season that made him a Heisman Trophy runner-up will be validated in December when he walks on stage to receive the prize he came to Stanford to earn. Sure, the Heisman would be great but Love's decision to bypass the draft and play his senior year for the Cardinal was made to earn his degree in human biology. (AP Photo/Marcio Jose Sanchez, File)

By JOSH DUBOW, AP Sports Writer
STANFORD, Calif. (AP) — Bryce Love’s unusual decision to return to Stanford after a season in which he was the Heisman Trophy runner-up might well be validated in December.
In fact, Love has already envisioned the ceremony. He can see himself walking on stage to receive the most coveted prize in college football.
But the decision to bypass the NFL draft after a 2,000-yard rushing season and play his senior year was not about individual awards. It was about getting his degree in human biology and spending another season with teammates. He calls the choice — staying in school vs. earning millions as a high draft pick — an easy one.
“It’s going to be surreal,” he said. “It’s a big deal for me and my family, being a college graduate and being able to graduate from a university with this much prestige. It will be a blessing. Tears will fly.”
Love’s 2,118 yards last season are the most for an FBS player who returned to school the following year. Only one other player who reached 2,000 yards in a season and was eligible for the NFL draft decided to stay in school — Northwestern’s Damien Anderson following the 2000 season.
Stanford coach David Shaw says he wouldn’t have been surprised by whatever Love decided. He understands the legitimate arguments either way.
“In my heart of hearts, if I had to guess what he would have done, I would have guessed that he would have come back, just knowing what goals he has both in football and out of football,” Shaw said. “I know he wanted to get stronger and be a little thicker, more prepared physically for the pounding of the NFL, and at the same time, I know what he wants to do off the field in his desire to go to medical school.”
Love has made a career of doing what few have done, whether it’s getting his pre-med degree in 3 1/2 years, returning to school when most others would have left or with his big-play production rarely seen in college football.
With vision that allows him to spot holes and sprinter’s speed that makes him almost impossible to catch, Love made the spectacular seem almost routine last season. He set an FBS record with 13 runs of at least 50 yards.
“He’s so quick, he’s so fast, he’s through the holes before you know it,” said Stanford linebacker Bobby Okereke, who feels fortunate he has to face Love only in practice. “I remember one play in practice where he cut back in a hole and most guys make that a 5-yard gain. He made it a touchdown. That shows you how fast Bryce is.”
Love is neither amazed nor impressed by his record runs, taking a philosophical approach to his success.
“Each run in the moment is kind of serene,” Love said. “That’s how I think about the game. It’s like poetry. Being able to go out there and hit those long runs is reflective of all the work the entire offense puts in.”
Love burst on the scene last year by rushing for 564 yards in back-to-back wins over UCLA and Arizona State at the end of September. He kept adding to those numbers and led all Power 5 running backs in yards rushing (2,118), yards per carry (8.1) and 100-yard games (12).
He finished second to Baker Mayfield in the Heisman Trophy voting and will be just the third Heisman runner-up to return the following season over the past nine years, joining fellow Stanford stars Andrew Luck and Christian McCaffrey.
Only four players have gone from runner-up one year to winner the next: Herschel Walker (1982), O.J. Simpson (1968) Glenn Davis (1946) and Tom Harmon (1940).
Love learned a lesson in watching McCaffrey follow a record-setting 2015 season, in which he narrowly lost the Heisman to Alabama running back Derrick Henry, with another stellar but not quite as productive campaign that led to a ninth-place finish in the Heisman.
“I just remember how he handled everything that was thrown at him and how he was able to bounce back from that to do things for us as a team,” Love said. “He set a big example for us and for me individually. You need to have that mindset of focusing in on your approach and your response.”
The opportunity to have another year in college also allows Love to be better prepared for what he will face in the NFL. He added a couple of pounds of muscle this offseason to make him better equipped to run between the tackles.
Shaw also wants to use Love in more aspects of the offense. Love provided little impact as a receiver last year, catching just six passes for 33 yards all season.
But Shaw said using Love more in the pass game is not about burnishing his Heisman credentials but just adding another aspect to the offense.
“This year’s about him getting bigger, stronger, being more versatile, different things, adding to his game,” Shaw said. “But we’re not going to do the Bryce Love stat watch. That’s going to be the majority of questions he’s going to get during the course of the year.”
___
More AP college football: https://apnews.com/tag/Collegefootball and https://twitter.com/AP_Top25

NFL: Some old guys to watch this season