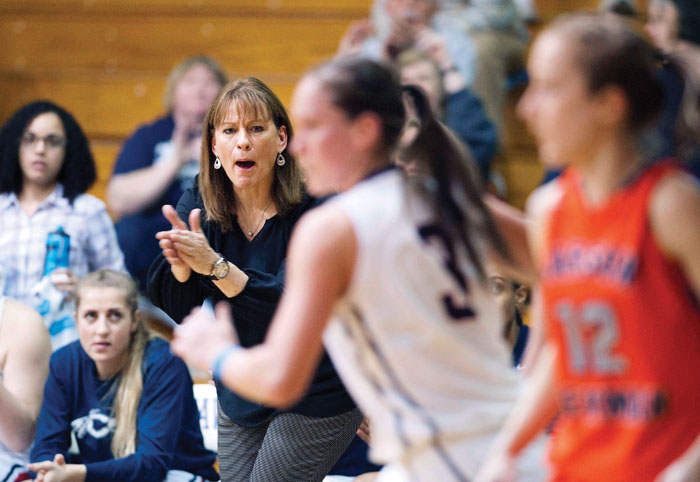 JON C. LAKEY / SALISBURY POST Catawba's Angie Morton, shown coaching during a game with Carson-Newman in 2015. Morton resigned her post at Catawba on Tuesday, after 15 seasons at the helm.

Morton, who has been at the helm since 2003, is stepping down to devote more time to her family, stated a news release from the college.

“I appreciate the opportunity I had to return to my alma mater to coach,” said Morton. “I had a great four years as a student-athlete at Catawba and another 15 as a coach. I’ve been blessed by all the players I have met, the coaches, administration and staff I’ve worked with and the ties I have made in the community.”

Morton guided the Indians for 15 seasons and leaves as the winningest coach in school history with 238 victories. She posted a pair of 20-win seasons and produced 13 winning campaigns.

“Angie has been an outstanding basketball coach and an outstanding ambassador for Catawba College for the past 15 years,” said Leckonby. “Her teams have consistently won basketball games, while her players have consistently graduated at rates well above the national average. We will miss her greatly, but know that she has left the program in an excellent position for the future.”

In her initial season in 2003-04, she led Catawba to both the South Atlantic Conference regular season and tournament titles and a spot in the NCAA II Southeast Regional. Catawba would make two more regional appearances during Morton’s tenure, qualifying in both 2012 and 2015.

In 2012, Morton was named the SAC Coach of the Year and nearly guided the Lady Indians to an upset in the regional, the team missing a three-pointer at the buzzer that would have knocked off top-seeded USC Aiken in the opening round.

Morton mentored a pair of SAC Players of the Year and WBCA All-Americans in Danyel Locklear and Dana Hicks and a league Freshman of the Year in Terri Rogers. A total of 26 players earned all-conference honors under Morton.

Morton’s team last season was 14-14 overall, but 12-8 in the SAC, good enough for a fourth-place tie with Lincoln Memorial.

Morton, a 1984 Catawba graduate, returned to her alma mater after serving as head coach at Pfeiffer University for seven seasons, where she compiled a 108-90 record.

During her seven years at Pfeiffer, Morton guided the Lady Falcons to a pair of Carolinas-Virginia Conference titles and the school’s first NCAA II playoff. The back-to-back 20-win campaigns, including a 24-5 mark in 2003-04, earned Morton consecutive CVAC Coach of the Year honors. Morton was also a CVAC Coach of the Year in softball in 2000 as she led Pfeiffer to the league crown.

Prior to her stint at Pfeiffer, Morton was the girls head coach at West Stanly High School for eight years. She guided the school to playoff appearances in all eight seasons and was RRC Coach of the Year in 1992. She also coached at Locust Elementary School and Knox Middle School before reaching the high school level.

As a student-athlete at Catawba, Morton (maiden name Crayton) earned 10 letters, playing basketball, softball and field hockey. In basketball, Morton played in 86 games and averaged 5.5 points, netting a career high 26 in a loss to Wingate as a senior. Morton was a .367 career hitter in softball with nine home runs and 74 RBI.

Originally from Stanfield, Morton is a graduate of West Stanly High School.

Morton resides in Albemarle with her husband, Randy. They have four grown children and four grandchildren.

Catawba will begin an immediate search to fill her position.