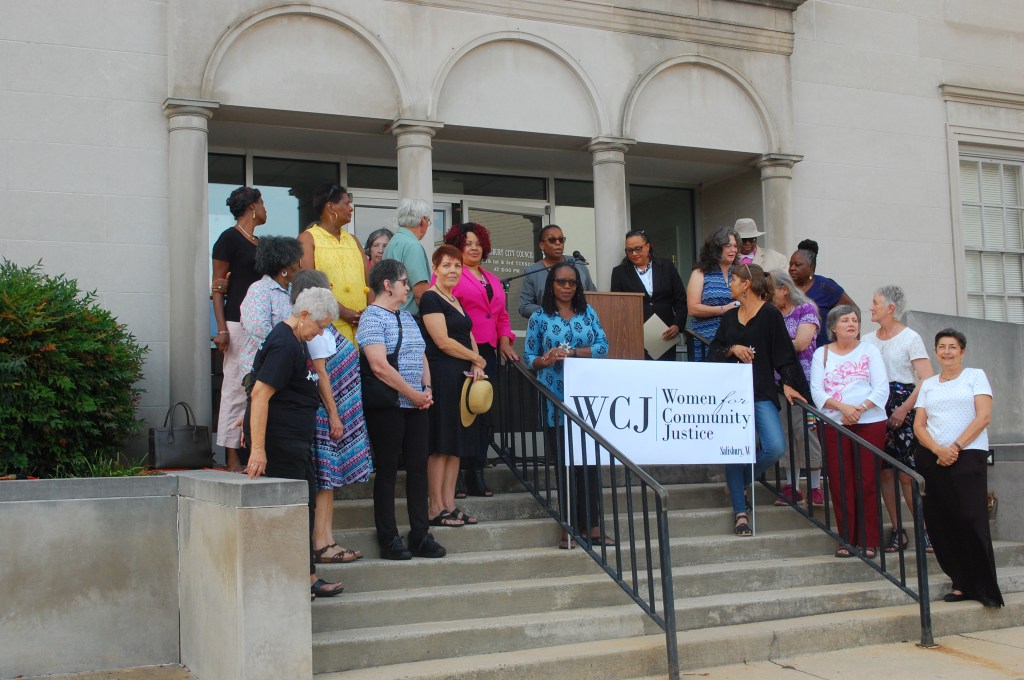 Regina Dancy calls for civility and respect among city council members during a Women for Community Justice press conference on Aug. 20.

SALISBURY — On the steps of City Hall on Monday night, members of Women for Community Justice called for City Council members to lead with civility and respect.

Regina Dancy, the group’s lead facilitator, stood with other members to read the recommendation.

The recommendation states: “On behalf of the city of Salisbury, and with the support of those grassroots organizations standing in solidarity with Women for Community Justice: We respectfully request our public servants to create and adhere to a code of conduct for Salisbury’s City Council. We challenge them to convene a task force comprised of socially, economically and racially diverse citizens to support them in this effort.

“We call on them to include in this document a commitment to practice respectful civility, professionalism and decorum in discussions and debate; to maintain order and comportment in the service of effective problem solving; and to avoid personal comments or nonverbal gestures that would offend other council members, detract from their remarks or otherwise disparage them or the office entrusted to them by their constituents.”

The news conference was a first for the advocacy group. Members said they felt they needed to voice their concerns after the Aug. 7 City Council meeting and the vandalism of Fame, the statue of a winged muse holding a fallen Confederate soldier, over the weekend.

“This is something that we have been working on and felt like we needed to do for a couple of weeks, and we have been planning for it, especially with what happened over this past weekend,” Dancy said. “We just felt like it was really confirmation that now was the time to do this — to hold this press conference.”

The Rev. Alberta McLaughlin spoke about how people begin to question leaders when they are disrespectful in a public setting.

“Council members must not allow emotions to escalate to the point that they signal an inability to responsibly handle the issue at hand,” McClaughlin said. “Citizens rightfully question their objectivity. When public display of instability and disrespect are witnessed, citizens can only speculate how sensitive issues are privately handled. Trust in our leaders, in their intentions and their ability to cooperate with one another is compromised.”

“We are living in an increasingly uncivil world,” Mary Frances Edens said. “From Washington to Raleigh to Salisbury, sometimes even to our own dining room tables, there seems to be more and more aggressive language and behavior in our society. We have experienced some very divisive events in our nation and even here in our own community.”

“The city of Salisbury, the state of North Carolina and our country, the United States of America, are withstanding pressures borne of internal differences and external pressures,” Dancy said. “All citizens and City Council members alike are called upon to raise our awareness, raise our standards and rise to the occasion that our city and that our democracy demand.”

Edens added Salisbury can be a leader of civility.

“I love Salisbury, and I know that Salisbury can raise the bar and set the standard,” Edens said. “Let’s confirm an agreement today and that we can and should make our city our nation’s model of civility. Let’s show that we can discuss differences without interrupting, raising voices or patronizing. We know how.”

Dancy said the next step is to see how council members respond to the recommendation at Tuesday’s meeting.