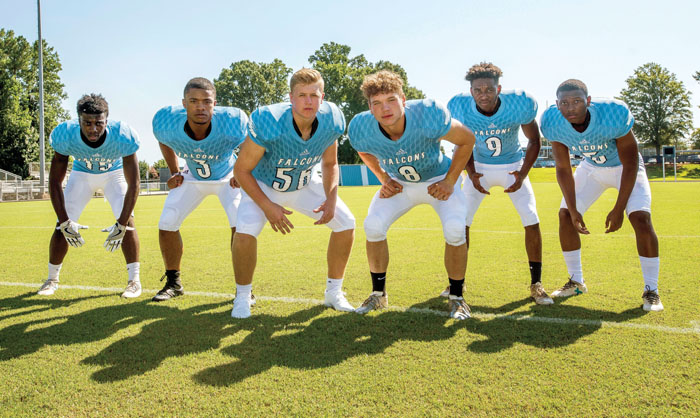 MOUNT ULLA — West Rowan senior Malik Robinson knows he’s got his work cut out for him when it comes to upholding the family name.

Robinson’s family has produced an amazing number of sacks and tackles while accumulating a  pile of conference and county player of the year accolades.

While his famous brothers and cousin were linebackers who flew around from sideline to sideline like human wrecking balls, Malik has a different body type and a less glamorous job description. As the Falcons’ nose guard, his effectiveness can’t be measured by statistics. It’s his job to stand his ground, to command double teams, to allow teammates to make the tackles.

He realizes he’s a long-shot to be a player of the year, but he’s OK with that. His mission is simply to win and to help get West back to the lofty status it enjoyed when he was growing up.

“All this kid knows is hard work, and he works like crazy every day,” West  head coach Joe Nixon said. “He knows he’s going to get double-teamed, but he’s high energy and he’s high effort on every single play.”

West was the county champion again last season (4-0), but the 6-6 overall mark, third-place finish in the North Piedmont Conference, and first-round playoff exit, all left something to be desired. Many West players, including Robinson, went to work way back in January, determined to turn things around.

“For months, we all have pushed and pushed each other to compete hard,” Robinson said. “I’ve worked on my flexibility as well as my strength. I want to be able to play every snap with strength, effort and good technique.”

Robinson was a 185-pound sophomore, but as a weight-room warrior he’s packed on 40 pounds of muscle in the last two years.

“He’s one of the strongest kids on our team,” Nixon said.

Robinson played a lot of football for the Falcons last year, toiling next to superstar Devin Turner, last year’s player of the year in the North Piedmont Conference as well as Rowan County.

“Devin was a great player, a team leader, and a mentor to me,” Robinson said. “I added a lot of knowledge of the game last year. Now it’s my turn to help lead and show what I’ve learned.”

While Xavier Robinson (8), Samolu (9) and L.J. Robinson (22) made lower jersey numbers feared in their day, Malik is happy with his No. 99, which is as high as you can go.

“I  like 99 because it’s (Houston Texans’ defensive end) J.J. Watt’s number, and I like the way he plays and the way he carries himself,” Robinson said. “I think the 99 fits me well.”

West has a dangerous passing game, but Nixon said the keys for the Falcons this season are going to be running the ball more consistently and doing a  better job of stopping the run. Stopping the run is where No. 99 comes in. He’s the first line of defense, the first obstacle that must be dealt with, for any running plays between the tackles.

Things didn’t go all that well for the Falcons in a 21-7 opening night loss to Mooresville, but Robinson went right back to work this week, eager to get the mistakes corrected.

“He’s one of the kids you never have to worry about,” Nixon said. “Every ounce of energy he’s got, he’s going to give us.”