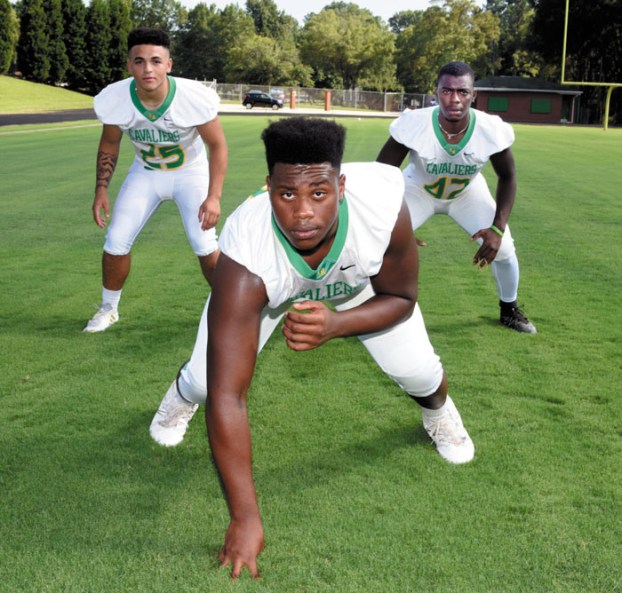 North Rowan Defense: front Benjamin Caldwell 54 and in back Nautica Patterson 25 and Tyzai Lyles 42. photo by Wayne Hinshaw, for the Salisbury Post

SPENCER — Sometimes a difficult road leads to a beautiful destination.

Examine the fate of North Rowan linebacker Tyzai Lyles, a chisled senior who found his path after being sent to the emergency room nearly two years ago.

“At the time, I didn’t know what to think,” he said last week. “There was a lot of pain. Looking back now, it wasn’t that big a deal. Just a small thing.”

No it wasn’t. Lyles, who suffered a grade-4 lacerated liver making a tackle in a 2016 game against West Stokes, appears fully recovered from the injury that ended his sophomore season. Surgery wasn’t required and rest became his best friend. He returned to the field last season, albeit with some apprehension, and led the 8-4 Cavs into the first round of the state playoffs.

“We lost him halfway through the season, but that just furthered his determination to be a great player,” said North coach Ben Hampton. “I still remember the play. It was early in the game, Week 5,  and he goes to make a roll tackle on a running back. He got up, came to the sideline and said he felt kind of weird. I think he took one or two plays off, went back in and played the rest of the first half.”

By then the pain was unbearable. His breathing became labored in the North field house and he was transported to the hospital. His season was history.

“The good thing is I healed quickly,” said Lyles, NR’s leading tackler and an all-county, all-YVC pick last year. “First I rested, then I started eating and lifting more. By last summer I was back out here working and getting ready for football.”

The 6-1, 205-pound Lyles was good to go by the time pre-season practice kicked off.  He helped North win all six of its home games, place third in the league standings and enjoy a six-game winning streak. He finished with three fumble recoveries and scored his only varsity touchdown when he pounced on a blocked punt in the end zone against Chatham Central.

“My only touchdown ever,” he noted with boyish enthusiasm. “But it’s not how I always imagined it would be. I thought I’d pick off a pass, fake a couple guys out and return it 90 yards — just me, taking off.”

“He needs to be playing somewhere on Saturday next season,” Hampton said. “We’ve already talked about how important the first three or four games are for him. That’s when you put up a film, get it out there and wait for guys to come look at him. His grades are good. He’s just got to take care of business on the football field.”

Hampton refers to Lyles as a madman on defense and special teams, but it’s a controlled madness.

“I’m an all-out defensive player,” Lyles said. “I enjoy being physical, playing smart and doing my assignments on Friday nights. But you can’t just run around and try to dominate because some plays don’t come to you. You have to be a team player and go get them sometimes.”

Even if it means taking a difficult road.