Football Edition: Football is a snap for Bradshaw 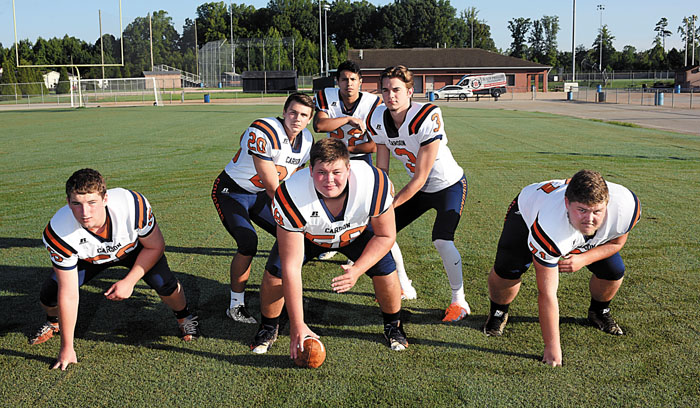 He stayed away from the game for a long time, especially when you consider the bloodlines. His grandfather, Salisbury-Rowan Hall of Famer Reid Bradshaw, was South Rowan’s head coach during the best run the program ever had in the 1970s and 1980s. Andrew’s father, Trent, was an all-county defensive lineman for the Raiders in 1990.

“I didn’t play YFL,  because I was just really into baseball when I was growing up,” Andrew said. “I even liked basketball better than football.”

He remembers he was shooting baskets in the driveway one afternoon, when his father walked up.

“My dad said, ‘I’m going to teach you to long snap,'” Andrew remembers. “That’s kind of where things changed for me.”

Since that day, football has become a priority for Bradshaw. He embraced the nuances of long snapping, learned to stand with his feet wider than his shoulders, his weight resting on the balls of his feet, with one hand on the laces and the other guiding the ball. Basically, he learned to throw a pass between his legs.

It’s not an easy job. On Friday nights with a defensive lineman snarling at him from a few inches away, Bradshaw is snapping a spiral to a punter 15 yards deep in the backfield or to the holder for a field goal or PAT who is 7 or 8 yards back. If all goes well you don’t even notice him. But if a ball goes bouncing back to the punter, fans starting looking through their program to figure out who No. 56 is.

“When I was started with long snapping, I was getting the ball  back there in 1.5 seconds, which is way too slow,” Bradshaw said. “Now it’s like .75 seconds or even .70 on a good day.”

The 225-pound Bradshaw was the all-county long snapper as a junior, although his value to the Cougars extends well beyond that. He’s also a starting offensive lineman. He’s expected to the left tackle this season, but he’s versatile enough to fill in anywhere and he can also play center or guard.

“He’s a jack of all trades,” Carson head coach Joe Pinyan said. “He’s also a student of the game and he understands the game. That’s something he’s had handed down to him.”

Like a lot of seniors before him, Bradshaw has accepted more of a leadership role in his final season. He’s excited about this year’s o-line unit, which includes three other seniors.

Carson rushed for 372 yards on opening night against South Rowan. That was the most rushing yards for the Cougars since the South game in the middle of the 2015 season.

“I’d say we’re a work in progress, but we have a lot more depth this season than last year and we have added some very talented backs,” Bradshaw said. “There could be some special stuff in the works for us.”

Bradshaw stands just 5-foot-9, but he’s hopeful that this his ability to long snap will extend his playing career into the college ranks.