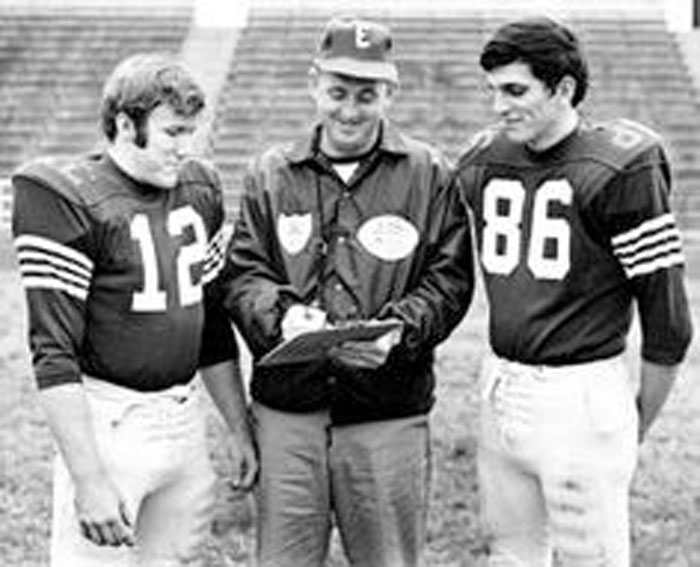 Bernhardt had done something highly unusual to get Cline’s attention. He had ample daylight down the sideline, a running back’s dream, but instead he’d veered sideways right into a potential tackler. He pancaked the hapless defender, but it allowed pursuers time to catch up.  So what was Bernhardt thinking?

“We didn’t have any guys on that team who were looking to run out of bounds,” said quarterback Claude Morris (C.M.) Yates with a laugh. “Vernon was always wide open. He explained to Coach that he just wanted to run over that joker.”

The Mustangs of 1968 were a hard-nosed bunch. Integrated, agitated and underrated, they gave the school its first conference championship. If there were a chance to hit somebody along the way, well, that was a pretty easy decision.

“Oh, yeah, 1968 was definitely important, it’s where the winning attitude started,” Yates said. “I was a sophomore that year, and I was pretty intimidated when the season began because we had real tough seniors, leaders, guys like John Morgan and Jerry Holshouser. Fortunately, they were welcoming to the sophomores.”

Yates had grown up quickly, playing roughhouse tackle football in the backyard with a much older brother and his friends. By the time he was 10 years old, Yates could throw and kick like an adult. In his first organized football league, YMCA ball in fourth grade, Yates met Johnny Yarbrough, who would become the other half of the “Y boys.” Yarbrough was a long-striding, pass-catching wizard.

In 1967, Erwin, the new junior high they’d built across the street from East Rowan, was so new it still didn’t have a cafeteria, but the football team with Yates and Yarbrough went 7-0 under coach Reid Bradshaw.

But high school was a major jump. Cline wouldn’t start Yates right away in 1968. Cline and assistants Aaron Neely, Phil Harbinson and Gilbert Sprinkle also had to figure out how to get the most out of Jerry Sifford.

Sifford had always played quarterback for the Dunbar Tigers, the school for black students in East Spencer, but 1968 brought busing to help get school integration in Rowan County moving, and the Siffords lived in Granite Quarry. East Rowan was the closest school to Sifford, so he went there and became a devastating halfback. Jerry Sifford arrived at East along with his cousin, June Sifford, a key defensive player, and Willie Lowe, who would become one of the most ferocious tacklers in county history.

“Thank goodness, they came over that year,” Yates said. “Willie Lowe was unbelievable, so fast, just chasing people down. I  remember a referee seeing him for the first time and coming over to our sideline and asking,”‘Who in the world is that guy? That’s the runningest fool I’ve ever seen.'”

When people reminisce about Cline’s stellar East Rowan teams of 1968-70 that went 31-4-1, Yates and Yarbrough are the first thing they think of. They’ve become mythical figures, so much so that you’d think East threw the ball around like crazy, but that wasn’t the case. Cline was a conservative coach, the Scott Young of his day. He was a fundamental guy who believed in the ball-control running game, suffocating defense and the kicking game. East really didn’t throw all that often, not in the regular season. But when the playoffs came around, when the opposition got really tough, that was a different story. That’s when Yates and Yarbrough made monumental plays in the biggest games in East history. That’s why they are remembered and revered.

“We threw it eight, 10, maybe 12 times a game,” Yates said. “We were always a running team and a defense-first team.”

East wasn’t supposed to be all that good in 1968. Mooresville and Davie County were the preseason favorites in the 10-team North Piedmont Conference. Both had shut out East Rowan in 1967.

There wasn’t much chatter about East. There was a reason. East had been decent in 1967 — 5-5 in Cline’s first year at the school — but the Mustangs had graduated 10 offensive starters.

Still, Cline was optimistic. He’d started a primitive, but effective weightlifting program after taking the East job, and it was starting to pay off. He had most of his defense back for 1968, and with the addition of Yarbrough and the transfers from Dunbar, East had traded a little size for a quantum leap in speed.

Cline was determined to two-platoon. The Dunbar transfers and the addition of transfer lineman Steve Staton, helped make that possible.

Yates, Bernhardt and tackles Lowe and Terry Deal, a monster for that era at 230 pounds, would be All-NPC players. Yates, Yarbrough, Bernhardt, Lowe, defensive tackle Morgan and linebacker Gene Ligon were all-county.

“I didn’t start right off and I didn’t deserve to start,” Yates said. “I remember Coach put me in and called a pass play for me. I remember rolling out, and it looked really crowded out there. So I tucked the ball and ran and got about 17 yards. I got hit, and that’s when my nerves went calm. I didn’t have a lot of jitters after that.”

East opened with a 27-14 win against South Rowan, the only non-conference game for the Mustangs. Sifford got 16 carries and proved he could be a difference-maker. It rained hard that night. Yates remembers Neely being up top, wearing a head set, lightning flashing around him, water soaking the field.

East relied heavily on a defense spearheaded by Lowe and Johnny “Pine Knot” Brown in those early games. There was a 7-2 win against West Rowan, followed by a 7-6 struggle with Davie. East got by North Davidson, 13-12, and survived North Rowan, 12-7, to get to 5-0. Jerry Sifford was out with a dislocated shoulder, but Bernhardt and Danny Shepherd rushed for more than 200 yards against the Cavaliers.

East had never started a season, 2-0, much less 5-0, so this was startling stuff.

A trip to Mooresville was next. That was supposed to be where the bubble burst. East had opened its doors in 1959, but it had never beaten Mooresville. East was 0-8 against the Blue Devils. Five of those eight losses had been brutal shutouts.

But this time it was different. There was a determined goal-line stand by the Mustangs. There was a blocked punt late in the first half, and suddenly it was Yates to Yarbrough for a 36-yard, momentum-swinging touchdown. East went on to win, 13-7.

“Johnny did things that if you didn’t see it, you wouldn’t believe it,” Yates said. “I had an opportunity to play with some really good players.”

There was an understandable letdown after that breakthrough. After rain pushed East’s game at South Iredell back to a Monday night, the Mustangs made the trip to Troutman and came out flat. East ran for only 41 yards and threw for just 69, with three picks. The Mustangs were hammered, 19-0, and the NPC was a race again. East didn’t fall out of first place that night because it got help from North Rowan. The Cavaliers beat North Stanly.

There was another ray of sunshine for the Mustangs that week. Sifford returned from his shoulder injury. That weekend he flatted North Iredell for 214 yards and three touchdowns on just 10 carries. Sifford went 83 yards the first time he touched the ball.

The key to the season was the game at North Stanly on Nov. 1. East was 6-1 in the league then, while North Stanly was 5-2.

North Stanly star Forrest Davis broke through the East line on a fourth-and-2 play and dashed 42 yards to give the Comets a 7-0 lead.

With East’s first championship hanging in the balance, Cline made the most impassioned halftime speech of his career. He went a little crazy. Players — and assistant coaches — still remember it.

Inspired, East went up, 8-7, in the third quarter when Robert Cecil tackled Davis in the end zone for a safety.

But it came down to the end. North Stanly had first-and-goal at the East 6 in the final minute. On fourth down from the 1, North Stanly sent strapping fullback Harold Kelly into an 8-man front, and Deal stopped him inches from the goal line. There were 7 seconds left on the scoreboard when East’s offense took the field. East had to snap it once, and being tackled in the end zone would mean a game-losing safety.

“Where that ball was spotted, you couldn’t have put a piece of paper between the nose of the football and our goal line,” Yates said. “I told our center Chris Stiller to give me the ball, and I didn’t want to run over him, but I was coming out of there. I didn’t have to do much. Chris blew it wide open for me.”

East’s final regular-season game was an easy one against Central Davidson, but there was no letdown as East clinched that first championship, 47-0. Sifford went 73 yards on  his first touch and finished with 12 carries for 212 yards. He had two TDs five minutes into the game.

East was 9-1 after crushing Central Davidson.

In the opening round of the Piedmont playoffs in the old Western North Carolina High School Activities Association, East was matched up with South Piedmont Conference runner-up Thomasville.

Thomasville was a scary team that had stuffed A.L. Brown and Concord and had battered Salisbury’s Boyden High, 46-0, but the Mustangs made it an exciting game against coach George Cushwa’s Bulldogs.

Thomasville beat Lexington in the Piedmont championship contest, before losing to Shelby in the WNCHSAA title game. East’s 1968 season ended at 9-2, but it also ended with that first title. It meant a lot to Cline, who once had been part of the construction crew that had built East’s field house.

That 1968 NPC championship would be a springboard to much larger things for Cline in 1969. Nine defensive starters would return. More black players would arrive from Dunbar and Shuford School to boost the Mustangs, who got deeper and faster.

The 1969 team’s epic struggles with Concord and Shelby, the perfect 13-0 season with six shutouts, those things would live on forever in Rowan football lore.

But 1968 is where the winning started.