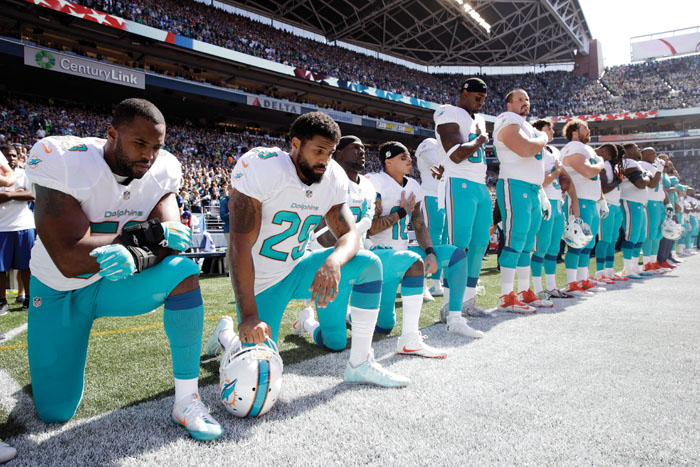 FILE - In this Sept. 11, 2017 file photo, from left, Miami Dolphins' Jelani Jenkins, Arian Foster, Michael Thomas, and Kenny Stills, kneel during the singing of the national anthem before an NFL football game against the Seattle Seahawks in Seattle. Miami Dolphins players who protest on the field during the national anthem this season could be suspended for up to four games under a new team policy issued to players this week. The policy obtained by The Associated Press on Thursday, July 19, 2018 classifies anthem protests as conduct detrimental to the club, punishable by suspension without pay, a fine or both. (AP Photo/Stephen Brashear, File)

If National Football League players continue their protests during the national anthem this season, it will rile some Republican voters, increasing their intensity and making it more likely that they will vote. At a time when Democrats want their candidates to be less controversial and let dissatisfaction with President Donald Trump carry them into office, continued protests by NFL players will force the issue back into the public spotlight and onto the campaign trail, where Democrats will mostly have to side with the protesters.

I am often frustrated that President Trump and Republicans do what their political opponents want them to do. But in this case, it is the Democrats who are being escorted by a few athletes into a position they would rather avoid. In June, shortly after the NFL owners passed a new league-wide policy requiring players on the field to stand during the national anthem, FiveThirtyEight published an analysis of several polls that were conducted on the issue and ultimately concluded that “the NFL’s new policy is a win for Trump – and on a field that matters, even though it’s not a policy or electoral victory.” A Washington Post-Kaiser Family Foundation poll conducted in January and February found that 53 percent of Americans think “it’s never appropriate to kneel during the national anthem in protest.” The voters who care most about football and tend to be offended by what they see as players using the game in furtherance of some political grievance are mostly Republican voters.

Undoubtedly, Trump will overplay his hand and overdo it trying to make the point that the demonstrators’ theatrics are disrespectful to an American institution and show contempt for the fans and what they hold dear. Nonetheless, Republicans will use the issue to their advantage and hit Democrats for supporting the protesters, just as Texas Sen. Ted Cruz did to his opponent Rep. Beto O’Rourke last week. Specifically, Cruz said: “When Beto O’Rourke says he can’t think of anything more American [than players taking a knee], well I got to tell you, I can.” Other Republican candidates are hoping their Democratic opponents set themselves up for this type of easy attack.

With the NFL’s regular season starting in about two weeks, the debate over these protests is sure to find its way into more and more campaigns. And it comes at a time when the NFL is dealing with an image crisis for its handling of domestic abuse and long-term head injuries (plus rule changes that slow the pace and thrill of the game). As the FiveThirtyEight analysis points out: “Patriotism. Free speech. Race. Politics. President Trump. There are a lot [of] hot-button issues that intersect in the NFL protests.” But collectively, these issues have been reduced down to a bumper sticker – standers vs. kneelers. That is a net positive for Republicans. The Democrats’ hopes for a “blue wave” this November might rest on how they maneuver through social issues that divide the parties. This issue is beyond the control of Nancy Pelosi and the Democrats who want to keep the elections focused elsewhere. When asked specifically about the NFL’s new anthem policy, Pelosi punted as she responded: “I love the national anthem. I love the flag. And I love the First Amendment, and I’ll just leave it at that.” In the coming weeks, Republicans will hold the Democrats’ feet to the fire.

Ed Rogers is a contributor to the PostPartisan blog, a political consultant and a veteran of the Ronald Reagan and George H.W. Bush White Houses and several national campaigns. He is the chairman of the lobbying and communications firm BGR Group, which he founded with former Mississippi governor Haley Barbour in 1991