‘A space we can call our own’: Veterans Honor Guard celebrates its new digs 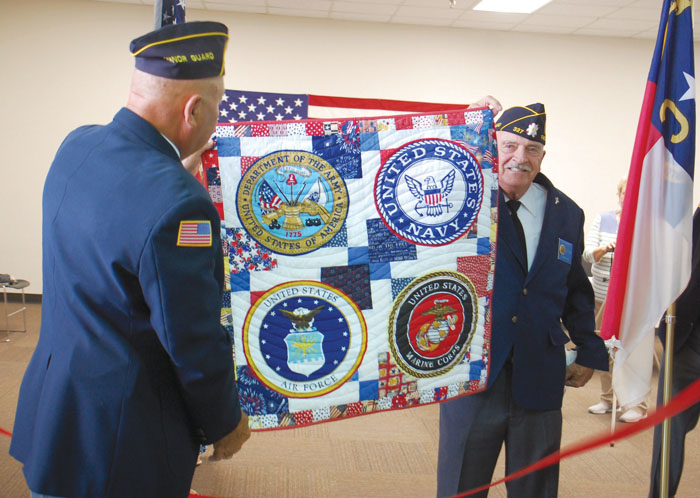 SALISBURY — After a presentation and ribbon-cutting. After Lt. Gov. Dan Forest offered flattering words. And after everyone was invited inside for celebratory cake and coffee.

That’s when Charles Cauble, commander of the Rowan County Veterans Honor Guard, said the most important words of the day:

“Welcome to our house.”

The spacious Honor Guard headquarters takes up two former storefronts at the mall, which is owned by Rowan County. It stands across from Thelma’s restaurant, where coffee gatherings for veterans happen every Tuesday morning.

Led by Commissioner Mike Caskey, the Rowan County Board of Commissioners made the space available to the Honor Guard at no cost.

The special guest for Monday’s ribbon-cutting was Forest, a member of the N.C. Advisory Commission on Military Affairs.

“I love doing anything associated with our military or veterans,” Forest said.

The Honor Guard’s presence at many funerals for veterans represents the first time those men and women were individually honored since the time of their military service, Forest said.

Before traveling to Salisbury, Forest had done some reading about the local Honor Guard. He noted that in years past, it had been present at more than 300 funerals a year and as many as six funerals a day.

Forest praised members of the Honor Guard for staying active and dedicating virtually every day to others who have served the country, as they have.

Among the local dignitaries attending were all the Rowan County commissioners; Rowan-Salisbury Board of Education members Josh Wagner and Dean Hunter; state Reps. Carl Ford, Larry Pittman and Harry Warren; Judge Marshall Bickett; and Chamber of Commerce representatives who organized the ribbon-cutting.

Bill Anderson, who at 89 is the Honor Guard’s oldest member, snipped through the big red ribbon with scissors that were equally as big.

The Rowan County Veterans Honor Guard was established in 1947. Anderson, who knows all the group’s important numbers by heart, said the honor guard has served at 108 funerals for veterans so far this year.

Beyond being part of these military rites, the Honor Guard participates in several parades a year and a host of flag-raising ceremonies for places such as high schools, colleges, the N.C. Transportation Museum and Price of Freedom Museum.

Cauble said he commands a group with about 18 active members.

Some of the other leaders in the Honor Guard include Anderson, the secretary; James Douglas, first vice commander; Chuck Quinn, second vice commander; Ed Keeter, treasurer; and Bill Lane, chaplain.

Cauble said the Honor Guard will use the new digs — “a space we can call our own” — for monthly business meetings, uniform storage and events.

Cauble said the Honor Guard is like the Marines in that “we can always use a few good men and women.”

“Our main purpose in life is to honor our veterans,” Cauble said.

As part of  Monday’s ceremony, the Honor Guard received for display purposes a specially made quilt from Shelley Lenhausen, Ellen Waterworth (Shelley’s mom), and Cindy Sipp.

For the past seven years, Lenhausen and Sipp have led an effort (aided by the local quilters guild) to make quilts for Rowan County veterans. They successfully arrange for quilts to be made here and delivered to 15 to 20 veterans twice a year — in May and November.

In recent years at national gatherings, the Rowan County Veterans Honor Guard has been recognized as both the best and second best veterans honor guard in the country.

Being second in Cincinnati, when the Rowan Veterans Honor Guard lost by a 10th of a point in the judging, Cauble said, was like “kissing your sister.”