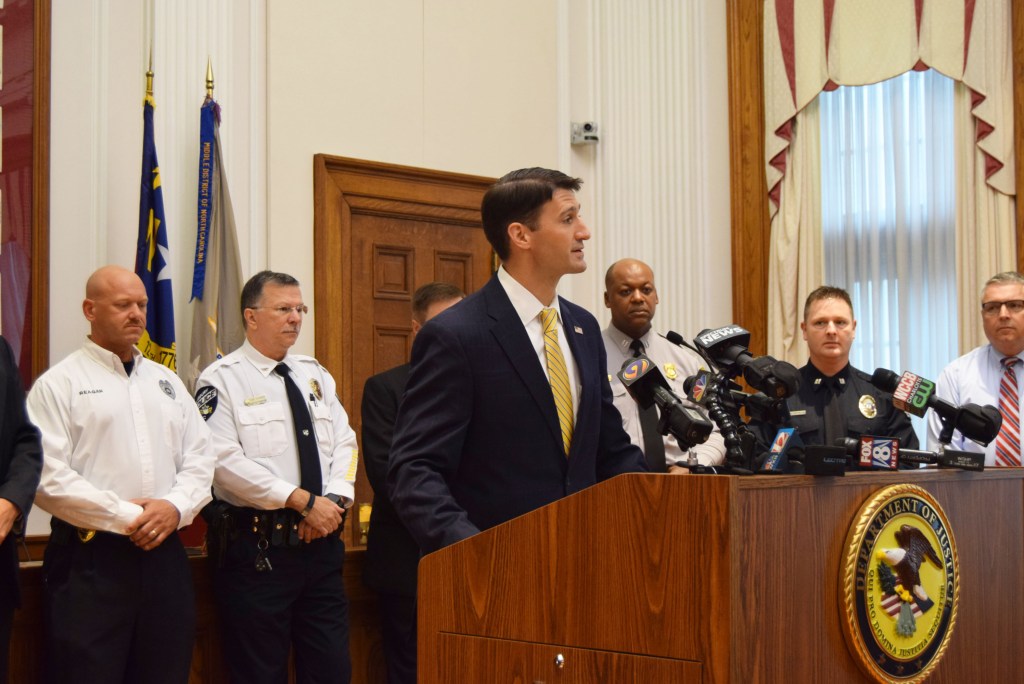 Matthew Martin, U.S. Attorney with the Department of Justice, speaks during a Monday press conference. A Grand Jury has indicted 28 individuals in connection with drug trafficking in and around Rowan County — 15 of them have been arrested. The case is related to a 2017 indictment that resulted in the arrests of 31 people. Rebecca Rider/Salisbury Post

SALISBURY — A federal grand jury has indicted 28 people in connection with a drug-trafficking ring that operated out of a Rockwell house and crossed state lines, the U.S. Department of Justice said Monday.

The bulk of the activity took place in and around Rowan County, U.S. Attorney Matthew Martin said.

Fifteen people were arrested, according to the indictment, parts of which were unsealed Monday morning. Charges include manufacturing and distribution of methamphetamine, cocaine and heroin and drug trafficking across state lines.

According to the indictment, at least part of the ring operated from 2501 Windswept Way, Rockwell. The residence was maintained for the manufacturing and distribution of methamphetamine, authorities said.

Officers from multiple agencies worked together to crack the case. They seized more than 41 kilograms of methamphetamine; more than 79 kilos of heroin; half a kilo of cocaine; more than 600 doses of Oxymorpone; numerous weapons; “large quantities” of ammunition; and more than $42,000 in cash.

“It’s unusual to have these amounts actually seized and what we would call ‘on the table’ as parts of actual evidence,” said Rowan County Sheriff Kevin Auten. “It’s always good to have actual drugs to show the jury to prove the case.”

Martin, who represents the Middle District of North Carolina, called the spread of drugs “a scourge in our community.”

“Drug trafficking of this sort will not be tolerated in any neighborhood — any inch of Salisbury, Rowan County or the surrounding area,” he said.

While most of the activity was in Rowan County, supply lines and distribution stretched into South Carolina, New Jersey, Washington state and California.

While most people think drug trafficking of this magnitude happens only in larger cities, Martin said that’s not always the case.

“You’re seeing more drug trafficking of this sort, especially along the major highways and byways. And so this is a battle,” he said.

“I hope what you see today is a united front,” Martin said. “There’s not territorialism here.”

He and other law enforcement officials said the indictment and federal charges will be a deterrent to other drug dealers. They also hope that scattering the trafficking ring will help lower drug-related deaths, which Martin said now exceed the casualties of U.S. soldiers in the Vietnam War each year. More than 70,000 overdose deaths were reported in 2017.

“This cannot be tolerated,” he said.

Auten called drug-related deaths “a two-headed snake.” People are overdosing and dying in droves not just from drugs like methamphetamine and heroin but also from pharmaceutical and prescription medication, he said. While this investigation can hopefully put a big dent in one, it will do little to affect the other. But progress is still progress, Auten said.

About 13 others have yet to be arrested, and their names are sealed by request of the Department of Justice.

“An indictment is just an allegation.” Martin said. “These folks are all going to get a fair trial — they’re entitled to a fair trail.”

Monday’s indictment follows a February 2017 indictment that charged 32 people, bringing the case’s total to 47 people. Of those 32, 31 are now serving time in federal prison. One is a fugitive.

The February case cracked a drug-trafficking conspiracy that dated back to 2014 and had ties to a Mexican cartel and the Aryan Brotherhood, according to a March 11, 2017, Post story.

The ring was based out of a home at 3045 Artz Road near Faith.

In one significant break in the case, authorities seized 7.72 pounds of methamphetamine on Oct. 29, 2015, from the Mount Pleasant home of Hope Elizabeth Berrier. Witnesses told investigators that as much as 10 pounds of meth had been moved at a time.

Authorities determined that large amounts of meth and heroin were being moved around the country. The shipments would go from Mexico to California, then to Washington state and finally to North Carolina, where the drugs were distributed in Rowan and neighboring counties.

A witness in the 2017 case said he transported meth from Georgia to Rowan County every one to two weeks in 4- to 8-ounce parcels. Several pounds of methamphetamine were seized during the three-year investigation.

Suspects in the 2017 indictment faced charges including money laundering, drug conspiracy, possession with intent to distribute meth and distribution of meth.

Salvador Valadez Jr. was also charged with transferring money for criminal purposes between the United States and a place outside the country.

Several of those arrested have been charged with previous crimes.

In June 2017, Hardin reported a robbery at his residence to the Rowan County Sheriff’s Office. Investigators determined that the robbery was actually a drug-related home invasion and armed robbery targeting Hardin. They found that Hardin had been the victim of other home invasions and armed robberies that were not reported to law enforcement.

On Oct. 2, 2017, Hardin was involved in a vehicle chase with federal, state and local law officers on Old Beatty Ford Road in southeastern Rowan County. He was charged with felony assault on a law enforcement official.

Morgan Nichole Pepper was charged in the 2017 indictment and was involved in the Artz Road distribution ring.

Ashley Paige Kramer was charged in October 2016 with possession of a Schedule III controlled substance.