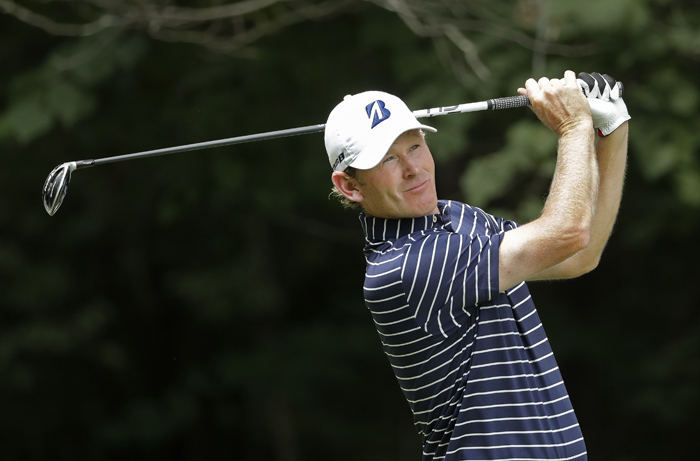 Brandt Snedeker watches his tee shot on the second hole during the final round of the Wyndham Championship golf tournament at Sedgefield Country Club in Greensboro, N.C., Sunday, Aug. 19, 2018. (AP Photo/Chuck Burton)

GREENSBORO (AP) — Brandt Snedeker began the Wyndham Championship with history — and ended it with a victory.
Snedeker earned his ninth PGA Tour title Sunday, three days after opening with an 11-under 59.
He closed with a 65 for a three-stroke victory in the regular-season finale, breaking a tie with C.T. Pan on the final hole with a birdie and Pan’s double bogey in the group ahead.
Snedeker finished at 21-under 259 for his first win since 2016 and his second at the tournament, but first at Sedgefield Country Club, to close what he called “the most stressful week I’ve ever had in professional golf.”
“Shooting 59 on Thursday, your expectations go through the roof,” Snedeker said, also expressing pride that he could “cap it off the way we did today, to play pretty much a flawless round of golf.”
Pan shot a 66 to tie for second with Webb Simpson. Simpson matched his career-best with a 62.
“I feel like it was a round I needed to make a push to the leaderboard,” Simpson said. “Brandt’s obviously had a great week … so I knew it was going to take something super low.”
Snedeker opened the tournament with the 59 that made him the first tour player this year and just the 10th ever to break 60, then on the final day played 29 holes at 5 under to seal it. He’s the fifth tour player to shoot in the 50s and then win the tournament.
He was never in danger of missing the playoffs for the first time in his career, but the victory gave him a huge jump on the points list. He climbed 50 spots to No. 30 on the list, after arriving at 80th — which would have been his lowest finish.
“To be perfectly frank, I didn’t have any chance at all” to win the FedEx Cup before this week, the 2012 playoff champion said. “After this week, I feel like I have a chance.”
For a while, it looked like it might come down to a playoff between Pan and Snedeker, who were even at 20 under entering Pan’s final hole.
But the 26-year-old from Taiwan ran into big trouble: Pan shanked his tee shot out of bounds off a cart path down the right side of the fairway and needed four shots, including the penalty stroke, to reach the green on the par 4.
Pan said he heard “a couple noises in my head which caused me to hit a bad shot.
“It’s my fault. I can learn something from it,” he said. “I only played one bad hole, which is fine. You know, I’ve still got a lot of golf left.”
With the victory seemingly inevitable at that point, Snedeker sank a 20-foot birdie putt on the 18th to end it, making him the 10th player to win in Greensboro multiple times. His victory here in 2007 was the first of his career, and this time he finished one stroke shy of Henrik Stenson’s year-old tournament record.
“Wanting so desperately to win this tournament, it was just a lot of emotion this week,” he said.
Severe weather led organizers to suspend the third round with 30 players still on the course and bring everybody back to Sedgefield on Sunday morning, leaving Snedeker with 29 holes to play on the final day.
He wrapped up that round with a one-stroke lead at 16 under before heading back onto the course. Since the tournament moved here in 2008, every third-round leader who was that far under par has gone on to win.
The other subplot at Sedgefield is the last-minute push for the playoffs, which begin next week at The Northern Trust in New Jersey with the top 125 players qualifying. With every player who was between Nos. 122-127 missing the cut, there figured to be plenty of movement near the bubble.
Sergio Garcia will miss the playoffs for the first time in his career after winding up 131st on the points list. Harris English and Nick Taylor played their way in, with Taylor saying he would “kind of soak it in and realize that we’ve finally done it.
“It’s really satisfying to finish it off,” he said.