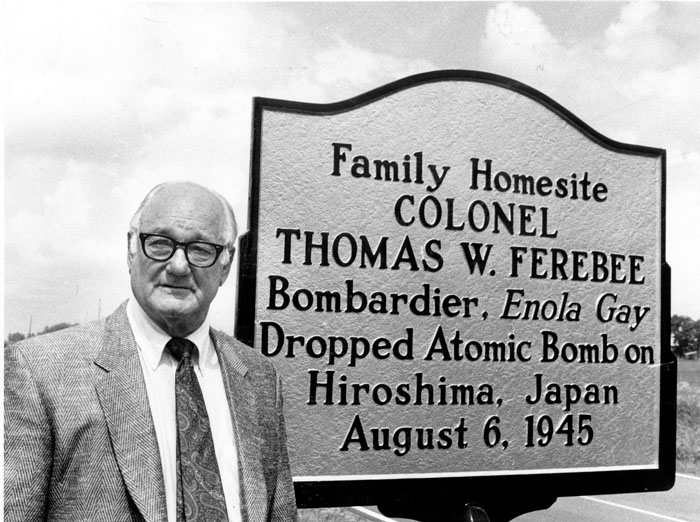 In this Memorial Day (May 27) 1991 photograph from the Salisbury Post files, retired Col. Tom Ferebee stands next to a marker signifying his birthplace along U.S. 64 in Davie County. Hundreds of Davie Countians honored their native son on Memorial Day that year with the new marker and a parade at the Mocksville town square. During World War II, a 26-year-old Ferebee was the bombardier on the Enola Gay, which dropped the atomic bomb on Hiroshima. Attending the festivities for Ferebee that day were Brig. Gen. Paul W. Tibbets, pilot of the Enola Gay, and Maj. Theodore ‘Dutch’ Van Kirk, the navigator. A different U.S. crew would drop a second atomic bomb three days later on Nagasaki, leading to Japan’s surrender and the war’s end. ‘Tom put the bomb where it belonged,’ Tibbets said in 1991. ‘What we did that day as a crew changed the nature of wartime forever. … If I could pick a brother, I’d pick Tom Ferebee. Ferebee died in 2000.