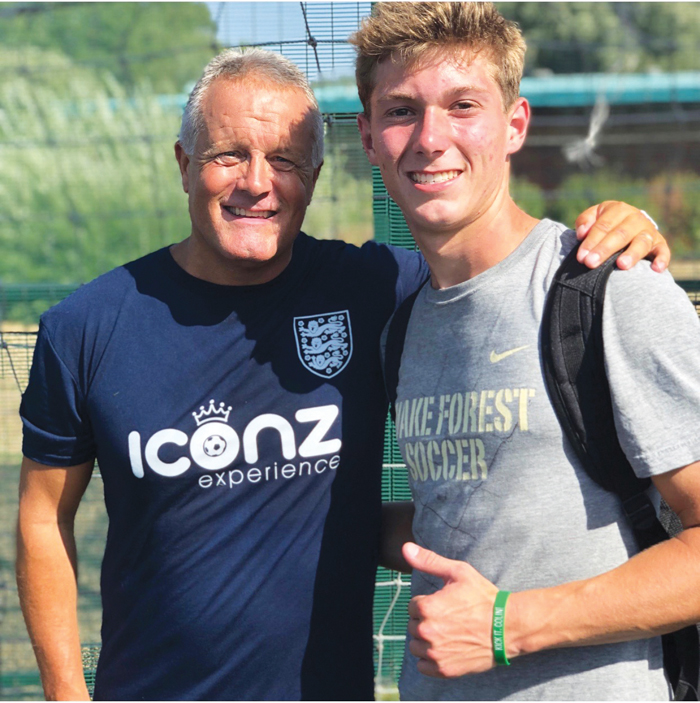 SALISBURY — Mitch Jeter, of Salisbury, spent a week in England recently, having been selected to train inside Premier League stadiums including Arsenal, West Bromwich Albion and Nottingham Forrest.

“The trip was the best experience in soccer of my life,” said Jeter, a rising junior at Cannon School in Concord. He also plays club soccer for Premier UK Soccer and was part of a team that made it to the semifinals of the North Carolina Cup.

Jeter was selected for the training trip based on a recommendation of his club and coach, Andy Thompson, and from an invitation from England’s Iconz Experience.

Arriving in London on Aug. 1, Jeter’s first stop was the Arsenal’s 60,000-seat Emirates Stadium. The son of Dr. Andrew and Stacy Jeter, Mitch said the stadium was “breathtaking and world class. We also learned about the history of Arsenal Football Club and what a day would be like as a professional player in the top division of English soccer.”

Jeter was also impressed with the history when he visited Nottingham, England, two hours from London. Nottingham won Champions League titles in 1979 and 1980 and the team captain for those squads, John McGovern, was the group’s tour guide around the stadium.

“The training was tough, as we saw what the professional team training and workouts were like,” said the young Jeter. “It was very intense and it asked a lot from your body.”

Jeter also got to play in games against Kettering Town FC and Mansfield Town. Against Kettering, a 3-1 loss, Jeter played the entire game at outside wing back. “I honestly do not know how much I ran during that game, but it had to have been 8-10 miles,” said Jeter.

The Mansfield Town contest was even more fun for Jeter, scoring a goal in the 6-0 victory. He also contributed an assist, again playing the entire 90 minutes.

“I played right wing back in a 5-3-2 formation in the Mansfield Town game,” remembers Jeter. “Both of those games were very fun and something new, as I had never played international soccer before.”

Jeter said that Smith taught the group about a mentality that one must have in order to become a professional player. “The mindset that Alan Smith wanted to place in front of us was the idea of never settling for lower than the top. You always have to want to be the best and never let anyone stop you from getting to that point.”

Jeter’s group was also able to attend two professional games, one at West Bromwich Albion’s stadium and one at Nottingham Forest. The game atmosphere was nothing like Jeter had seen in the United States.

“It was the loudest stadium environment you could ever be in,” Jeter recalls. “At the game at West Bromwich Albion, the group got to be on the field as the players walked out. It gave me chills to look around and see a whole stadium showing so much support for their team.”

At Cannon, Jeter earned all-conference and All-NCISAA Region 2 honors in 2017. He was also a key member of teams that advanced to the state semifinals in 2016 and state finals last season and was the conference’s leading goal scorer.

It’s safe to say, Jeter’s trip to England will inspire him this coming season at Cannon.

“I’ll use the lessons and practical experience gained there for my season,” added Jeter. “It was an experience I will never forget and I’m truly grateful for having had the opportunity.”