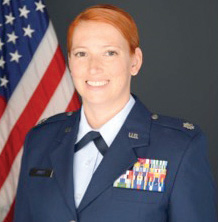 Melody Jones, 1999 graduate of South Rowan High School, and 2003 graduate of the University of North Carolina at Chapel Hill, was promoted to the rank of Lieutenant Colonel in the United States Air Force on June 1, 2018.

Lt. Col. Jones’ mother and step-father, Ramona M. Trexler and Leon E. Trexler, traveled from Salisbury to attend the ceremony, held on May 31, 2018, at the U.S. Embassy San Salvador, El Salvador, where Lt. Col. Jones is assigned as the Air and Naval Attaché in the Defense Attaché Office.