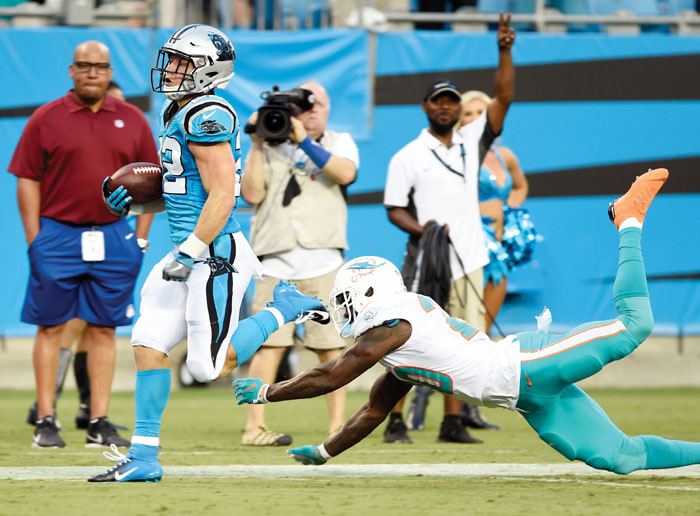 CHARLOTTE (AP) — The Panthers are looking to find ways to get the ball into Christian McCaffrey’s hands as much as possible this season.

It’s easy to see why.

The second-year back had 120 yards from scrimmage in the first half, including a 71-yard touchdown run as Carolina defeated the Miami Dolphins 27-20 Friday night in a preseason game.

McCaffrey had 92 yards rushing on five carries and caught four passes for 28 yards for Carolina (2-0).

Panthers coach Ron Rivera recently said he wants to get McCaffrey “25-30 touches” per game this season and find ways to get him the ball in space.

On the second play from scrimmage, McCaffrey slipped through a big hole up front and then shifted to another gear outracing several defenders to the end zone.

“I saw a heck of a gap,” McCaffrey said. “The offensive line did a great job. … It’s just my job to hit the hole, find the crease and go. It was a great play.”

It’s the type of big play the Panthers were missing from McCaffrey last season — his longest carry went for 40 yards — and one of the reasons offensive coordinator Norv Turner was brought in to replace Mike Shula.

Rivera said the Panthers have always believed the 5-foot-11, 205-pound McCaffrey has what it takes to run between the tackles based on what he did at Stanford.

“We feel like he has the kind of quickness that he can pop one and make something happen,” Rivera said.” So we are very comfortable and confident with what we think he can do.”

Cam Newton overcame an early interception and two sacks by Robert Quinn to finish 9 of 12 for 89 yards, including a 27-yard touchdown pass to speedy rookie tight end Ian Thomas to give Carolina a 13-9 lead before exiting near the end of the first half.

Miami quarterback Ryan Tannehill was an effective 14 of 17 for 100 yards despite playing without wide receivers DeVante Parker and Kenny Stills, but the Dolphins (0-2) struggled to finish drives and settled for three field goals in the first half. Kenyan Drake had 54 yards rushing on eight carries.

“We’re moving the ball but we’re getting field goals,” Dolphins coach Adam Gase said. “We had a great opportunity after a turnover to put it in the end zone and we didn’t do it; we had negative plays (and penalties). We have a lot of things to clean up.”

Gase did like what he saw out of the Dolphins pass rush, particularly from Quinn .

“That was one of our problems last year when we came here,” Gase said. “We couldn’t get the quarterback down. I thought the guys harassed (Newton) and did a good job of causing some pressure.”

For Carolina, Thomas could be Carolina’s next big producer on offense.

He’s been having a good training camp and the 260-pounder showed impressive speed catching a pass from Newton on a crossing route and turning up the right sideline with a head of steam and racing to the end zone untouched.

“It felt good knowing that my teammates had confidence in me in running the play and showing the fans what they can expect for the season,” he said.

Dolphins wide receiver Albert Wilson took a knee and Quinn held up his right hand during the national anthem. Last week in the preseason opener against Tampa Bay, Wilson kneeled and Quinn stood and raised his right fist.

HANGING OUT WITH FANS

New Panthers owner David Tepper tailgated outside the stadium with fans prior to his first home game. Tepper, who bought the team from Jerry Richardson for $2.2 billion earlier this summer, was seen out and about with fans wearing shorts, a Panthers golf shirt and sneakers while enjoying a beverage. That’s a stark contrast from the straight-laced Richardson, who regularly wore slacks and dress shirts to games.

Dolphins: Frank Gore had been expected to see his first action of the preseason, but the Dolphins declared him a healthy scratch.

Panthers: Starting safety Da’Norris Searcy suffered a concussion after delivering a vicious hit on Drake near the sideline. Searcy was flagged for lowering his head and the Dolphins picked up a first down on the play. … Rookie guard Brandon Mahon left the game with a calf injury.

Dolphins: Host the Ravens next Saturday.