My Turn, Olen Bruner: Let’s work together to bridge the racial divide 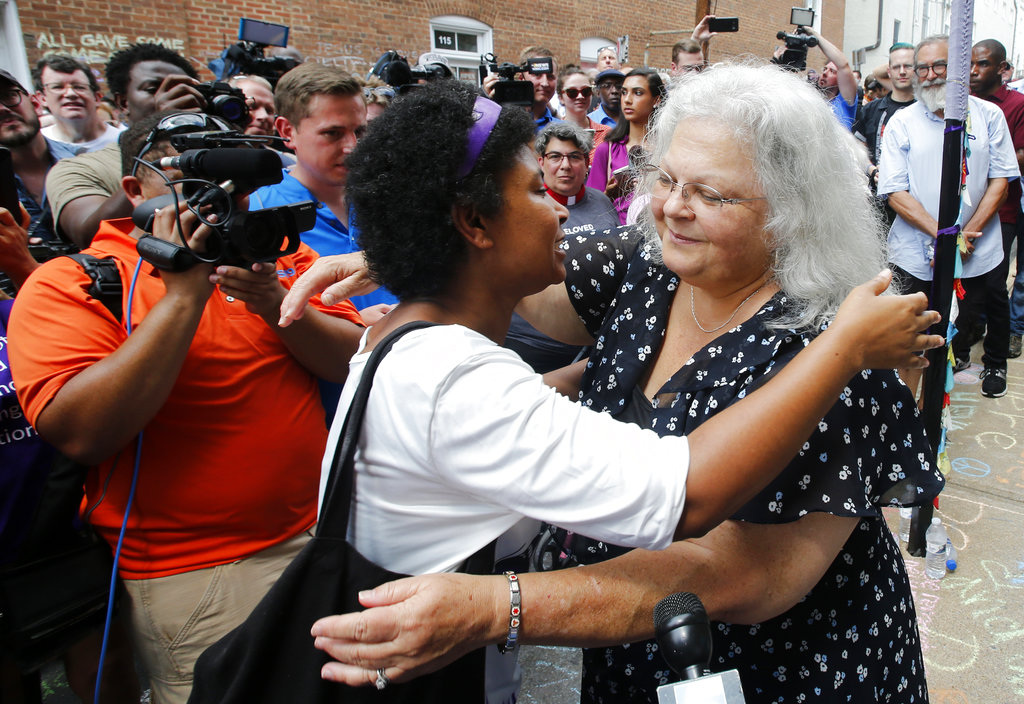 Susan Bro, right, mother of Heather Heyer who was killed during last year's Unite the Right rally, embraces a supporter after laying flowers at the spot her daughter was killed in Charlottesville, Va., Sunday, Aug. 12, 2018. Last year, white supremacists and counterprotesters clashed in the city streets before a car driven into a crowd struck and killed Heyer. (AP Photo/Steve Helber)

Did the stars align right Aug. 7 in the sky? Salisbury City Council’s discussion of a resolution of reconciliation took place near the anniversary of the Charlottesville,Va., confrontation.

Last weekend was an example of a national divide concerning race and politics. As an American, I was pleased to see the rejection of hate and division by people of consciousness in the streets of Washington, D.C.

The weekend expressed and exposed the divide in our nation, a divide which is fueled by the direct result of our national leadership, in the stripping away of the very garb of decency and respect we should share for each other. It only reveals the fear found in our supposed diversity.

I refer to our supposed diversity because we are really not that different. To start, do you love your children? Because I surely love mine. America is better than this pettiness and confusion, and we, the citizens of Salisbury, ought to be better than this also.

I stated earlier that I was pleased to see the rejection of hate and division by people of consciousness, but that was not the case with several members of the City Council. Now wrap yourself in a flag, if you must, but I will resist privilege in every form when I see it. I write thi, because that is what I witnessed and was demonstrated in City Council last week over a resolution of reconciliation.

How do we begin as a nation and as a city to build that bridge across the divide? Actions in Faith and Justice, a group for which I am chairperson, believes it starts with each of us valuing and respecting one another. We are called to stand up for what we believe in by participating in a dialogue of mutual respect.

Did you read what occurred Monday night, Aug. 6, in a room filled with over 100 Salisbury citizens, coming out in the rain to view a film called “An Outrage: Lynching in the American South”?

The mayor’s resolution of reconciliation was an attempt to push back, to publicly voice and gain support for ending bias, prejudice, bigotry, acts of violence, racism and hate. It was a step toward a brighter future filled with openmindedness, fairness, peace and love.

I look forward to a better demonstration of collegiality among our city leaders, especially toward the mayor. Robert’s Rules of Order suggest that if you have an unreadiness for whatever reason to vote, you can move to table the business at hand. Save us all the time and embarrassment of witnessing the political posturing and public display of privilege. Let us begin to build that bridge together across the divide within our community. Salisbury, as a city, will be better for it.

The Rev. Olen V. Bruner is pastor of Trinity Presbyterian Church in Salisbury and chairperson of Actions in Faith and Justice.

Letter: Create destination on Rowan side of Wil-Cox Bridge