Cokie and Steven V. Roberts: The stench of hypocrisy on immigration policy 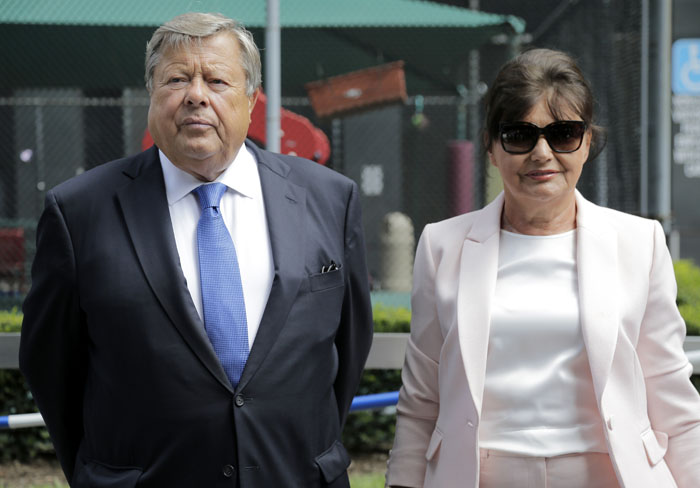 Viktor and Amalija Knavs, the parents of first lady Melania Trump, have been sworn in as U.S. citizens. The Slovenian couple had been living in the U.S. as permanent residents. AP Photo/Seth Wenig

The stench of hypocrisy wafting out of this White House is particularly odious these days. The president continues to denounce what he calls “chain migration” — the ability of legal immigrants to bring family members into this country — while his wife’s parents have benefited from precisely that process.

Melania Knauss came to the U.S. from Slovenia to work as a model in 1996; after marrying Donald Trump and becoming a citizen, she brought her parents, Viktor and Amalija Knavs, to join her. Recently they became citizens themselves, and we applaud the first lady’s devotion to family values. Now the president’s son Barron has two grandparents living nearby — legally.

Good for them all.

But the president’s attacks on “chain migration” remain relentless and malicious, including this tweet: “Chain migration must end now! Some people come in, and they bring their whole family, who can be truly evil with them. NOT ACCEPTABLE!”

Moreover, he’s embraced a proposal that would allow legal immigrants to sponsor only spouses and minor children — not parents or siblings. If Trump has his way, people like Barron’s grandparents would be stuck back in Slovenia.

Michael Wildes, the lawyer who represented Melania’s parents, called Trump’s immigration policies “unconscionable.” Chain migration, better known as family reunification, is a “beautiful bedrock of immigration law,” he told CNN. “People will work harder and love more and do more for America knowing that their loved ones” can join them here.

In an earlier interview with the Huffington Post, Wildes explained: “This whole notion of ‘chain migration’ being negative is a new phenomenon, and this vocabulary is emanating from people that are xenophobic and do not have a proud sense of our immigration legacy.”

It’s even worse than that. Trump is playing on xenophobic fears in a cynical and calculated attempt to exploit the anger and anxiety of his core supporters. And he’s lying to do that.

The president constantly argues that limiting “chain migration” is necessary to thwart terrorists and preserve jobs. But every study shows conclusively that immigrants commit crimes at far lower rates than native-born Americans and contribute far more to the economy than they cost.

Public attention has focused primarily on Trump’s high-decibel campaigns against illegal immigrants, but as Trump’s “chain migration” comments illustrate, this White House is quietly but persistently trying to limit legal immigration, as well.

H-1B visas are heavily used by high-tech companies to recruit and retain talented foreign-born scientists and engineers, but these companies are finding it much harder to get visas approved.

“Brick by brick, the administration actually is making it more difficult for higher-skilled individuals to come to work in the United States,” said Diane Rish of the American Immigration Lawyers Association to The Wall Street Journal.

The administration has virtually eliminated a program called “temporary protected status,” which allowed more than 300,000 victims of political and natural disasters, mostly from Central America, to live here legally. Trump slashed the annual quota for refugees from 110,000, set by President Obama, to 45,000, and his administration is on pace to admit even fewer than that this fiscal year: only about 25,000. And plans are reportedly being drafted to deny citizenship to any immigrant who’s accepted any public benefit, like food stamps.

The president’s hypocrisy is especially abhorrent because his own family — not just his wife’s — has benefited enormously from the “beautiful bedrock” tradition of welcoming immigrants.

His mother, Mary Macleod, emigrated from Scotland in 1930 to join her sister in Queens: a classic case of “chain migration.” When his father’s father, Friedrich Trump, arrived from Germany in 1885, he was greeted by his sister Katherine and her husband, Peter Schuster.

“If Trump’s proposed rules applied,” writes Philip Bump in The Washington Post, “neither Trump’s paternal grandfather nor his mother would be allowed to enter the United States, since each came to meet a sibling already here.”

Then there is Stephen Miller, Trump’s leading adviser on immigration policy, whose great-grandfather fled anti-Jewish pogroms in what’s now Belarus in 1903. The family flourished in America. Stephen’s uncle David S. Glosser recently denounced his nephew in a memorable article in Politico.

“I have watched with dismay and increasing horror as my nephew, who is an educated man and well aware of his heritage, has become the architect of immigration policies that repudiate the very foundation of our family’s life in this country,” wrote Glosser, a retired neuropsychologist.

Trump and Miller are both abandoning the foundations of their own heritage. The reek of that repudiation keeps growing stronger.