Tom Campbell: Be careful what you ask for, lawmakers 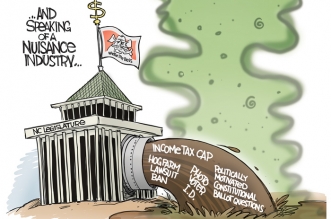 When the courts rule against laws our legislature has passed, which they often do, it never seems to enter lawmakers’ minds that those rulings are because of their own wrongheaded notions. Nope. Republican leadership is convinced those rulings are the result of too many Democratic judges. The solution is to get more Republicans on the bench. But sometimes they outsmart themselves.

Let’s go back to 2015, when Supreme Court races were nonpartisan and there were four Republicans and three Democrats on our high court. How could Republicans maintain that margin since the only Supreme Court election was that of Republican Bob Edmunds? The legislature concocted a “retention” election, meaning Edmunds would not face direct candidate opposition, merely an up or down vote to retain his seat. That law was challenged and overturned; the state Constitution specifically calls for the election of judges. Caught up in all the resultant publicity and, placed second on the list of candidates, Edmunds lost to Democrat Mike Morgan, swinging the political makeup to 4-3 in favor of Democrats. Oops!

In the closing hours of the 2017 legislative session, a measure was introduced to redistrict the state’s prosecutorial districts — some believed it an effort to reduce minorities and increase Republicans on the bench. In the 2018 short session that redistricting prospect prompted lawmakers to “postpone” judicial primary elections. Additionally, the Assembly restored party affiliation labels to all judicial candidates and jimmied with the order in which they were listed on the ballot. There was a proposal to appoint rather than elect judges, but that concept never got traction. At session’s end a proposed constitutional amendment would take away the power of the governor to appoint judges to vacant positions and essentially give it to lawmakers, a measure every living governor has publicly denounced.

Talk of dirty tricks filled the air, specifically the suggestion that a party might arrange candidates to file against incumbents from the opposition party in order to split the votes and help elect their party’s candidate. The talk became reality when Chris Anglin, previously a Democrat, changed his political affiliation to Republican and filed to run against justice Barbara Jackson for the Supreme Court.

This wouldn’t have been a problem had Republicans not insisted on attaching party labels to each candidate, then eliminated the judicial primaries. Chris Fitzsimon, on the TV talk show “NC SPIN,” said Republicans were “hoisted upon their own petards,” meaning they got trapped by their own efforts to defeat Democrats.

Not to worry. In a special session (overturning Governor Cooper’s separation of powers vetoes) they passed legislation that removed the party affiliation designation from any candidate who changed parties within 90 days of filing. This would force Anglin to run without a designation and make Jackson the only Republican running; however, Anglin sued and won a verdict that negated the “after the fact” maneuver. He will run as a Republican.

Is this déjà vu 2016? All this publicity might hurt Jackson as it did Edmunds in 2016. If Democrat Anita Earl wins, our Supreme Court could have a 5-2 Democratic split instead of the current 4-3. Look for more shenanigans in the 2019 legislative session.

Lawmakers, be careful what you ask for, because you just might get it. Only sometimes your maneuvering backfires.

Tom Campbell, former assistant state treasurer, is creator/host of “NC SPIN,” a weekly television discussion of N.C. issues that airs on UNC-TV. Contact him at www.ncspin.com.

Sharon Randall: Crazy things we do for love