Sharon Randall: Crazy things we do for love 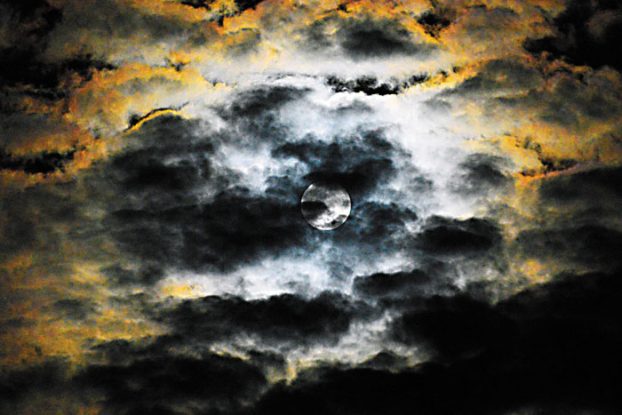 The moon peeks through storm clouds. Would you walk three miles, starting at 3 a.m., to see a friend? Photo by Wayne Hinshaw

Have you ever done something that was so hare-brained crazy you feared, if anyone found out, you’d never hear the end of it?

Readers often tell me stories I won’t repeat without permission though they know, when they tell me, what I do for a living.

Sharing a story with a columnist is like asking a monkey to hold your banana. The monkey might like you, but bananas are hard to resist.

I asked permission to tell you this story. Luckily, the woman who told it to me said yes. I won’t tell you her real name or where she’s from. It doesn’t matter. She could be any one of us. Let’s call her “Pat.”

I met Pat years ago when I spoke at an event near her home town. I’ve never forgotten the warmth in her smile or the light in her eyes. She’s a devoted mother and grandmother, retired after years of being a church secretary. Not the sort of woman you might expect to be walking the streets at 3 a.m.

Recently, Pat wrote to tell me about her former pastor, whom she’d worked with for many years and had become close friends with him and his wife.

Ninety years old, and suffering from Parkinson’s, he’d been in assisted living since losing his wife two years ago. Now, Pat said, he apparently had only a few days left to live on Earth.

“Lately, I wake up in the night thinking about him and I can’t get back to sleep. So at 3:00 a.m. this morning,” she said, “I decided to drive to his assisted living facility to check on him and sit with him for a while.”

He often had family and friends visit by day, but at night, Pat said, he’d be alone. There are times when all we can do for someone is just be with them. This was one of those times.

Imagine her surprise, backing out of her garage, to discover  her van had a flat tire.

She sat there praying for direction. None came. So she prayed for protection and started walking. “I know it wasn’t the brightest thing to do. But sometimes when we follow our hearts, we do things the brain disagrees with.”

Halfway through the three-mile walk, a young Hispanic man rode up on a bicycle and said, “Lady, what are you doing out walking this time of night?”

“Due to my prayers,” she said, “I figured God had sent him.”

He told her to climb on the bike behind him and he’d give her a ride to visit her friend. She tried, but couldn’t manage it.

“OK, then,” he said, “I’m going to ride beside you to see that you get where you’re going.”

And so he did.

Finally, Pat said, after an hour’s walk with her God-given bodyguard, “I was able to sit at my dear friend’s bedside and hold his hand and let him know he wasn’t alone.”

Pat doesn’t want us to think she’s entirely crazy. She points out that: 1) She lives in a small town with a relatively low crime rate; 2) the street was well lighted, more or less; and 3) she had asked God for protection and the strength to do the walk.

What could possibly go wrong? If she were my teenager, and not my 73-year-old reader/friend, I would ground her for life. Instead, I emailed back a quick shout-out: “You go, girl!”

Two days later, Pat wrote, “Our dear pastor passed away the day after my three-mile, 3 a.m. walk. I’m surely going to miss him, as will many others!”

She will always be thankful for  her decision that night, but looking back on it, she says, “I can scarcely believe I did that. It isn’t like the ‘usual’ me. But I’m betting you know other usually practical people who, from time to time, do impractical — even irrational — things in order to come alongside a friend and help them carry their burden.”

She’s right. I know lots of people who do crazy things to follow their hearts and help a friend. I like those people a lot.

I’ll bet you know some, too. I’d love to hear about them. If you want to tell them this story, by all means, feel free. You have mine and Pat’s permission.

Sharon Randall can be reached at P.O. Box 416, Pacific Grove CA 93950 or on her website: www.sharonrandall.com.