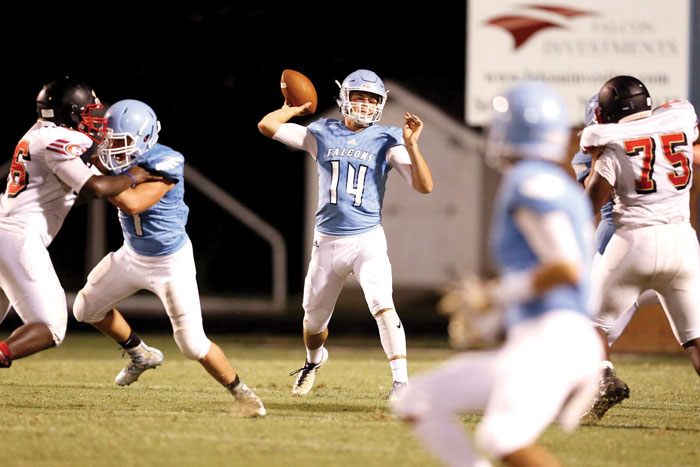 West Rowan QB (15) Payne Stolsworth stands in the pocket during last week's scrimmage against Salisbury. Photo by James Sipes, for the Salisbury Post.

The prep football season starts noisily at 7:30 tonight, with a couple of humongous, head-banging county rivalries — North Rowan at Salisbury and Carson at South Rowan.

As non-conference games go, these contests are about as big as it gets. Besides providing serious bragging rights to the winners, their student bodies and their fan bases, these neighborhood games are tone-setters that can carry many weeks into the season.

This is the 12th season for the Cougars, who have taken on Sun Valley, North Rowan, Hickory Ridge, Salisbury and South on various opening nights. Carson is a very respectable 7-5 on opening nights over the years, including last year’s 18-15 victory against the SR Raiders. Opening night will always hold fond memories for the Cougars. The first win in Carson history, the victory that applied the brakes to a 22-game losing streak, came on the Cougars’ opening night against North Rowan in 2008.

Both southern Rowan teams ended up in exactly the same place in 2017 — 3-8 and out of the playoff picture — but both are optimistic that better things lie ahead. At last week’s Rowan County Jamboree, Carson, deeper and faster than a year ago, looked like a good candidate to be the county’s most improved team.

Time brings change. Carson assistant coach Jason Rollins was the head coach of the Raiders for the first Carson-South Rowan gridiron matchup in 2007. The schools didn’t meet on the football field in 2006, the first year Carson was open. Feelings were just too raw then. Now the rivalry is pretty respectful.

This will be the 58th opener for South Rowan, which has gone 24-32-1 against a lengthy list of opening-night opponents that includes East, North and West Rowan, Salisbury, A.L. Brown, Mooresville, Northwest Cabarrus, Central Cabarrus, South Iredell and Carson.

The Raiders have dropped seven of their last eight openers, but they did surprise South Iredell in a 2014 upset.

Some of the amazing moments in South history have occurred on opening night, including the unbelievable, 37-36,  overtime stunner against A.L. Brown in 2003 and the 70-0 romp against Mooresville in 1978 that still holds a spot in the record books as South’s most lopsided victory ever. On the flip side, South’s 66-31 opening night loss to Central Cabarrus in 2012 had to be seen to be believed.

This is the 61st season for North Rowan football. The Cavaliers are 31-28-1 against a multitude of opening-night opponents. During the Roger Secreast coaching era, North would take on anyone, anywhere on opening night, so the Cavaliers have history against some strange foes. Over the years, North, which opened for business in 1958, has collided in openers with  Granite Quarry, China Grove, South Rowan, Monroe, Statesville, North Stanly, South Iredell, West Davidson, Central Cabarrus, Mount Airy, West Rowan, A.L. Brown, Greensboro Grimsley, Mount Tabor, Albemarle, Scotland County, East Rowan, Carson and Salisbury.

North and Salisbury, frequently a regular season-ending game, met on opening night for the first time in 2017, and the Cavaliers had their way with the Hornets in Spencer, winning 42-17. That emotional triumph helped North post an 8-4 record, the county’s best in 2017. Salisbury recovered well enough to finish 7-4.

North has won its last six opening-night contests, one against Carson, four against East Rowan, and one against Salisbury. The last time the Cavaliers didn’t win their first one was when Carson knocked them off in 2011.

Opening night history for Salisbury goes all the way back to 1915 and a 57-0 loss to Greensboro that marked the start of high school football in Rowan County.

The school got better on opening night as the years went by. From 1948-1959, legendary coach Bill Ludwig didn’t lose any of his last dozen opening nights (11 wins, one tie). After Pete Stout got things rolling in the second half of the 1960s, there were 10 straight opening-night victories (1968-77) on Lincolnton Road.

East’s 39-25 loss to North Stanly in 2017 stretched East’s string of consecutive opening-night losses to five. The last time the Mustangs started 1-0 was when they beat Salisbury in 2012.

Fifty years ago, East Rowan won an 8-7 game against North Stanly that keyed the Mustangs’ first-ever conference championship. You can read about that game — and that season — in the Post’s annual football edition next week.

West Rowan and Mooresville is a traditional opener between neighbors that are usually good at football. They’ll play in Mount Ulla.

Mooresville won the first seven meetings for a head-start in the series, but West holds a slight edge since the 1967 Falcons, West’s first strong team, broke through for a victory in the series. West did some serious catching up during the recent glory days, smacking the Blue Devils nine straight times (2003-10, plus a 2005 playoff game) at one point.

Mooresville ended West’s winning streak, the longest in the nation at that time, on opening night in 2011. West’s incredible streak under the late Scott Young ended at 46 games.

This will be the 16th time West and Mooresville have squared off on opening night and the eighth time in a row. Mooresville has won five of the last seven meetings.

Like East Rowan, West Rowan starts its 60th season of football tonight. The Falcons have taken on Hartsell, East Forsyth, East Rowan, South Rowan, Burns, Boyden, Salisbury, Davie County, South Iredell, Wilkes Central and Central Cabarrus, as well as Mooresville, on opening night. West is 25-33-1 in openers. mostly because it stood 9-21-1 at the end of the 1980s. West tied Davie in 1975,  in the pre-overtime days, the last time a Rowan team tied on opening night.

West head coach Joe Nixon did very well in openers when he was at North Rowan and is 4-2 on opening night.

Davie vs. Greensboro Page has become a traditional opener. It’s been War Eagles vs. Pirates the last seven seasons, wild games for the most part, with Page holding a 4-3 edge by virtue of a 20-14 overtime win in 2017. Davie is on the road this year, after opening its new stadium at home against the Pirates last season.

A.L. Brown is at home against Hopewell tonight.

Readers like picks, although picks, as we remind everyone every single year, are pure guesses when it comes to opening night.

At least we know the opening night history for ever school, and the Rowan Jamboree, where we had a chance to scout all six teams, was helpful.

South Rowan may be better than last year. The defense definitely has a chance to be better, but Carson has a veteran offensive line working against new faces on South’s defensive line. I’ll be stunned if the Cougars don’t win, even at South. The Cougars lead the series, 7-4,  and it’s hard to argue with Pinyan’s 13-2 opening-night record: Carson 28, South 14.

As far as Salisbury and North Rowan, Salisbury still leads the series 27-24-2, but there are a lot of reasons to pick the Cavaliers. There’s last year’s win over the Hornets, the fifth straight time North has beaten Salisbury. There’s North’s six-game winning streak on opening nights. North also is the team with the experienced quarterback. As far as the Jamboree, North looked better than the Hornets, but teams don’t game-plan for scrimmages, and Salisbury will have a plan in place tonight. Salisbury owns the home field, has some studs on offense and defense and would like to avenge last year’s setback. Salisbury also should have the kicking game advantage for the first time in a long time. It should be exciting: North 21, Salisbury 17.

Mooresville has a new coach, Thad Wells, who was hired in March. He comes from Blacksburg, Va., where his team won a state championship in 2016. Mooresville has owned the edge in the series lately  and leads 26-22 overall, but I am convinced West is headed for a bounce-back season from 6-6. A win tonight would be a solid start: West 24, Mooresville 21.

North Stanly is 1A, but it’s coming off one of the great seasons in school history, and it’s hard to pick against the Comets and running back Cameron Davis, who has posted crazy career numbers, including 12.2 rushing yards per carry. He’s rushed for 4,743 yards and he’s scored 71 touchdowns: North Stanly 28, East Rowan 17