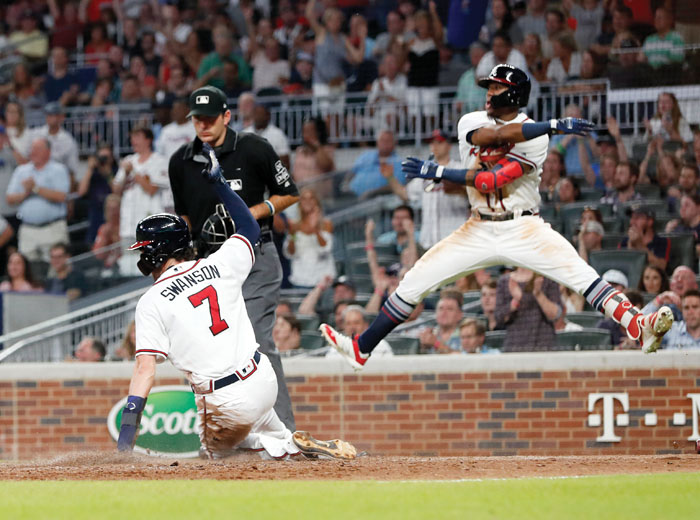 Atlanta Braves Ronald Acuna Jr. reacts as Dansby Swanson (7) scores on a Julio Terheran base hit during the fifth inning of a baseball game against the Colorado Rockies on Thursday, Aug. 16, 2018, in Atlanta. The Rockies won 5-3. (AP Photo/John Bazemore)

ATLANTA (AP) — The Colorado Rockies took care of a couple of streaks.

First, they found a way to keep Braves rookie Ronald Acuna Jr. from hitting one over the fence.

Then, Colorado rallied for three unearned runs in the ninth inning and a 5-3 victory that snapped Atlanta’s five-game winning streak Thursday night.

David Dahl homered in the third and finished off the winning outburst against a depleted Atlanta bullpen, going the opposite way for a two-out, two-run single to left against Brad Brach.

“I was just trying to stay calm,” said Dahl, who has spent time at Triple-A, missed a big chunk of the season with a broken foot and struggled to earn playing time with the Rockies. “I had a feeling he was going to throw some off-speed stuff with (first) base open. I was just trying to take the ball the other way.”

With several relievers on the disabled list, including closer Arodys Vizcaino, the Braves have patched together a bullpen that usually turns to A.J. Minter to finish games. But the left-hander was unavailable after pitching three times in four days. So the Braves turned to Brach, who was acquired in a trade-deadline deal after recording 11 saves for Baltimore.

He couldn’t convert his first save chance with Atlanta, hurt by shortstop Dansby Swanson’s error leading off the ninth. Brach (1-3) recorded only two outs, surrendering two hits and a walk as the Rockies won for the fifth time in six games.

“We have to stick to our guns,” manager Brian Snitker said. “We have to get through the game even when we’re without some of those guys.”

One night after being plunked in the left arm by Miami’s Jose Urena, Acuna was back in the lineup looking to extend his homer streak to six games. Wearing a red protective guard, the 20-year-old slugger received a standing ovation his first time up and lined the second pitch — one more than he saw the previous game before leaving — into center field for a single that extended his hitting streak to nine games.

Acuna finished 1 for 4, lining out to right in the eighth in his final opportunity to become the first player in Braves franchise history to homer in six straight games.

The Braves squandered a strong outing by Julio Teheran, who turned in his longest start since May 30. He pitched three-hit ball over seven innings and helped his cause with a run-scoring single in the fifth, snapping a 2-2 tie.

The Braves couldn’t hold the lead.

“It’s part of the game,” Teheran said. “Those things happen.”

ST. LOUIS (AP) — Bryce Harper had three hits and drove in three runs, and a beleaguered bullpen held on as Washington snapped a four-game losing streak.

The Nationals won for just the third time in their last 10 games and snapped the Cardinals’ season-high, eight-game winning streak.

A bullpen that had blown two leads to start the losing streak took care of the rest. Justin Miller pitched two scoreless innings and Koda Glover earned the save in the first opportunity since Ryan Madson was placed on the disabled list on Tuesday.

In the first game, Jose Bautista hit a grand slam and had a career-high seven RBIs as the Mets set a franchise record for runs, prompting the Phillies to use two position players to pitch the final three innings of a 24-4 rout.

The Mets kept on hitting in the nightcap with three straight doubles on Zach Eflin’s first four pitches. Michael Conforto’s two-run double made it 2-0.

But then Hoskins crushed one high off the foul pole to give the Phillies a 3-2 lead in the bottom half against Steven Matz (5-10), just activated from the disabled list. Hoskins, who went deep in both ends of the twinbill, has 11 of his 25 homers since the All-Star break — and three in the last four games.

PITTSBURGH (AP) — Jon Lester pitched six innings to win for the first time in just over a month and Ian Happ homered as Chicago beat Pittsburgh.

Lester (13-5) allowed five hits, struck out eight and had no walks while improving to 3-1 against the Pirates this season. His previous victory came July 15 at San Diego and he had gone 0-3 with a 10.32 ERA in five starts since the All-Star break.

Steve Cishek, Carl Edwards Jr. and Pedro Strop each pitched one inning to complete the six-hitter. Strop hit David Freese with a pitch with two outs in the ninth but converted his 10th save in 13 opportunities.

Happ connected with one out in the fourth inning off Ivan Nova (7-7) for his 13th home run, a drive deep into the right-center seats that was the game’s only extra-base hit. There was a fair share of cheers while Happ rounded the bases as he is from suburban Mount Lebanon, Pennsylvania.

NEW YORK (AP) — Rookie left-hander Adam Kolarek pitched out of a bases-loaded, no-out jam in the ninth inning to lift Tampa Bay over New York to win its first series at Yankee Stadium since 2014.

Tampa Bay had lost 12 straight series in the Bronx, a record since the ballpark opened in 2009.

The Rays’ bullpen mostly cruised following Blake Snell’s five sharp innings until Sergio Romo allowed consecutive singles to Didi Gregorius and Gleyber Torres in the ninth — Torres’ bloop ended his 0-for-17 skid. Romo walked Neil Walker on four pitches, then was replaced by Kolarek, a side-arming lefty who earned his first career save.

Tommy Pham helped the Rays jump on Masahiro Tanaka (9-3) with an RBI double during a two-run first inning, and Snell (14-5) and the bullpen took over from there.

The teams combined for seven homers, with Polanco’s three-run shot accounting for one of three by the Twins. Miguel Sano and Ehire Adrianza also went deep for Minnesota, which broke the game open with a seven-run sixth inning.

Forsythe raised his batting average to .449 (22 for 49) since joining the Twins in a trade that sent Brian Dozier to the Dodgers.

ARLINGTON, Texas (AP) — Jurickson Profar started an especially rare triple play and homered to help the Texas Rangers rally from an early five-run deficit for an 8-6 victory over the Los Angeles Angels on Thursday night.

Rougned Odor singled home the go-ahead run in the eighth after an out call that would have ended the inning was reversed. Nomar Mazara went deep in his return from the disabled list, and Joey Gallo also homered for the Rangers.

Texas turned the sixth triple play in franchise history in the fourth. With the bases loaded, David Fletcher hit a low liner toward third base that Profar picked on a short hop. Playing near the bag, Profar stepped on third to force out Eric Young Jr. and then tagged Taylor Ward, who had stumbled off the base into foul territory. Profar then threw to Odor, and the second baseman tagged Kole Calhoun between first and second.

It was the majors’ first triple play without retiring the batter since June 3, 1912, when the Brooklyn Dodgers turned the trick against the Cincinnati Reds.

The Rangers scored three runs in the eighth as Justin Anderson (3-3), the seventh of eight Angels pitcher in a “bullpen game,” allowed the first four batters to reach base.

Odor, batting with the bases loaded, hit a comebacker that reliever Osmer Morales deflected with his glove toward second base. Angels shortstop Andrelton Simmons threw to first and Odor was called out by umpire C.B. Bucknor, but the call was overturned following a replay review. Texas added another run on a wild pitch by Morales.

Matt Moore (2-6) earned his first win since April 17 by pitching two shutout innings in relief of starter Ariel Jurado. Jose Leclerc worked a scoreless ninth for his third save.

Jurado allowed the Angels’ first five batters to score. He also gave up Calhoun’s homer in the second inning.

Calhoun had three hits, including his 17th home run.

Career reliever Taylor Cole made his second major league start, both this week, and retired only three of eight batters for Los Angeles.

Angels: RHP Hansel Robles (shoulder) was placed on the 10-day disabled list, retroactive to Wednesday. To replace him, LHP Ty Buttrey was recalled from Triple-A Salt Lake. Buttrey and Morales made their major league debuts, giving Los Angeles a club-record 14 players who have done so this season and a team-record 56 players who have appeared in a game this year.

Rangers: Mazara played for the first time since July 14, when he injured his left thumb. OF Willie Calhoun was optioned to Triple-A Round Rock. … 3B Adrian Beltre (hamstring) missed his second straight start after being removed from Monday’s game. Texas plans to wait a few days before deciding if Beltre needs to go on the disabled list for the third time this season.

Twins starter Ervin Santana wasn’t particularly sharp, either, in his fifth start after missing most of the year rehabbing a finger injury. Santana was pulled in the fifth after loading the bases with nobody out. He gave up seven runs and seven hits.

Mikie Mahtook and James McCann hit consecutive homers off Santana in the fourth to trim Minnesota’s lead to 8-5. It was the first time all season the Tigers connected for back-to-back shots.

Polanco’s first-inning homer put the Twins up 3-2 after Nicholas Castellanos’ two-run homer in the top of the inning gave Detroit an early lead.

The Tigers threatened in the fifth and Trevor May walked in a pair of runs in relief of Santana to make it an 8-7 game.

One day after Marlins right-hander Jose Urena hit streaking Braves rookie Ronald Acuna with his first pitch of the game, the play was a common topic in MLB clubhouses. Urena was handed a six-game suspension.

Tigers manager Ron Gardenhire offered his opinion on the subject when asked about it before Thursday’s series opener in Minnesota.

Said Gardenhire: “I would be mad enough if I were the manager, I might start him tomorrow and lead him off just so they can smoke him and knock him out just because he did something so stupid, throw at a kid like that just because he’s hit home runs.”

Tigers: SS Jose Iglesias was out of the lineup and will miss “a couple days,” according to Gardenhire. Iglesias injured his right thumb during Tuesday’s game against the White Sox.

Twins: LHP Adalberto Mejia underwent a series of tests on his left wrist at the Mayo Clinic in Rochester and was diagnosed with nerve irritation. The team said there is no timetable for Mejia to begin rehabbing. He was injured Aug. 7 against Cleveland.

Tigers: LHP Matthew Boyd (7-10, 4.20 ERA) takes the mound looking to build off his last start, a six-inning, two-hit effort against the Twins five days ago in Detroit.

Twins: RHP Kyle Gibson (6-9, 3.49) got the win against the Tigers his last time out, allowing just one run over seven innings.