‘A new world:’ Teachers set out to change Rowan-Salisbury Schools under renewal 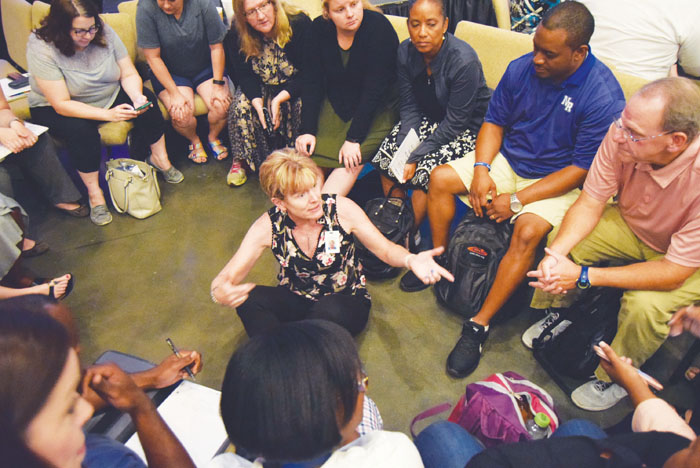 Teachers from North Rowan Middle debate whether they want their school to keep its School Improvement Team — something mandated by the state for other N.C. public schools — or try something different. Rebecca Rider/Salisbury Post

SALISBURY — When Superintendent Lynn Moody asked if anyone wanted to stand up to defend the current school calendar, you could practically hear the crickets.

The same thing happened when she asked the group of teachers about kindergarten assessments, final exams, and end-of-grade tests.

A Thursday morning gathering of roughly 300 educators allowed Rowan-Salisbury Schools administrators to take the temperature of teacher temperament on topics that individual schools have long been shut out of.

“I think people far away have made far too many decisions about the way (education) should be,” Moody said.

On Aug. 2, the State Board of Education approved Rowan-Salisbury’s application to become a renewal district, granting the system charter-like flexibilities. RSS is the first and only district in the state to be given this opportunity.

As administrative staff worked on a plan to guide the district, Moody and others were adamant that teachers lead the charge. Once the renewal was official, schools began accepting applications for teacher-led design teams. Thursday’s meeting was the first for the teacher-led teams. And the teachers made their opinions clear: They are done with the status quo.

In addition to learning about renewal, teachers spent Thursday holed up in the sanctuary of Life Church brainstorming, sharing ideas and pointing out flaws in the current system. They were encouraged to express their concerns, voice questions and suggest unique approaches to education.

While no decisions were made Thursday, the discussion got gears turning. Teachers chimed in on districtwide issues, but some were a little hesitant at first.

“If we’re the first ones doing (renewal),” one teacher said, “everyone’s looking at us, everyone’s following us, and we don’t really have a model to follow. … As teachers, this really puts us outside of our comfort zones.”

Still, the room buzzed with conversation and laughter.

“Nobody is telling us; we get to tell,” another teacher said.

Design teams will use school needs assessments to determine what to tweak at their own schools, then come up with ways they’d like to change things. Depending on the category — curriculum, infrastructure or resources — ideas will be presented to district-level project managers who will review the suggestion, suggest changes and send it back to teachers.

“We want to make sure that we have instant feedback and constant communication with you,” Smith said.

Once an idea is polished, it will be taken before the Rowan-Salisbury Board of Education and, if approved, put into practice.

“We are taking education back,” Smith said.

Thursday’s discussion gave district administrators some ideas to work with and present to the board. For instance, the teacher teams almost unanimously said they want to scrap kindergarten assessments, N.C. final exams, a traditional school calendar and school improvement teams.

“There has been no indication by the General Assembly of reducing or eliminating EOGs or EOCs. But if we were going to fight for something, what would we fight for?” Moody asked the teachers.

Many said they’d like to see less emphasis on end-of-grade and end-of-course exams and perhaps use benchmark testing as a stand-in for those assessments.

Instead of a traditional school calendar with a long summer break, many schools said they’d rather have a year-round calendar or start classes early, like Rowan County Early College. Some teachers said they’d prefer some combination of the two — an early start date with one- to two-week breaks between quarters.

“Starting next year, we can do anything we want to with our school calendar, but we have to start planning that now,” Moody said.

The group also discussed “renewal teachers” — people who could choose not to pursue a teaching license. Moody and other district staffers were careful to emphasize that these instructors would likely be adjunct, just teaching a class or two a year, and that candidates would be expected to have a great deal of relevant experience.

Educators said they want to be part of the interview committees for new candidates, that renewal teachers should have at least a 2.5 GPA and that they should receive the same level of pay as certified staff.

District-level staff will work to fashion the ideas into concrete plans and present them to the Board of Education for comment, tweaking or approval.

“You have been fighting the odds today, and I can’t thank you enough for doing that,” Moody said.