Picture it: Students get a look at future careers, STEM 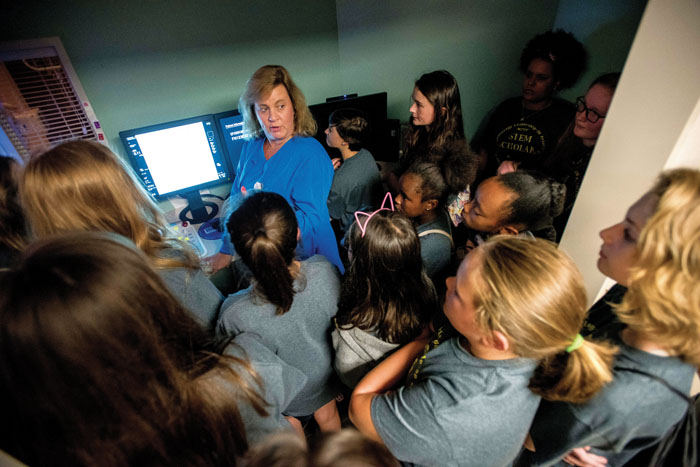 SALISBURY — Debbie Hartley talks about her job as she hands out lead aprons to a group of middle school girls.

“In the hospital, you get to see the trauma, the blood, the gore,” she tells them.

But here, at Novant Health Imaging Center, patients are up and walking. They talk to the outpatient staff and Hartley and others to form relationships with them. It’s something Hartley loves about her job.

Hartley is a radiologist, and Tuesday she and other outpatient medical staffers gave sixth- through eighth-graders an up-close and personal look at their careers. The students are Novant STEM Scholars — a camp funded by Novant and hosted through Horizons Unlimited.

“It allows us to take completely different experiences than what we would normally do,” said Neil Pifer, planetarium director at Horizons.

Thanks to Novant, the camp is free — aside from a $10 T-shirt fee. Campers to travel all over Rowan County to see how STEM is used in their own backyards.

“(Novant) wanted them to see that there were opportunities in their own community,” said Kyle Whisenant, instructional technology teacher at Horizons.

At each stop, campers learned how STEM can be used in that field and heard career veterans talk about their love for their jobs.

“It shows them that you don’t have to go to big cities to have a meaningful career,” Whisenant said.

In fact, some of those careers — such as radiology technician or physical therapy assistant — don’t require a four-year degree. Training is available right at home through RCCC’s associate programs.

This is the second consecutive year Horizons has hosted the camp, and this year’s 36 students were eager to learn.

“It’s fun. You get to learn about many things I haven’t thought of before,” student Emma Rose Dishman said.

Dishman, a home-school student, said she joined the camp with a friend. While she thought the camp would be interesting, she’s been surprised at all she’s learned and at all there is to do.

Robert Coleman, a rising sixth-grader at Knox Middle School, has become interested in STEM over the past year or so.

“(I thought) this would be perfect to try and see if I want to build my interests more,” he said.

Coleman said he enjoys STEM because he gets to tinker with things and because “you rarely get the same thing twice.”

Campers have also spent the week working with kindergarten through second-grade students attending a Horizon’s coding camp. Coleman said he has really enjoyed mentoring the students and learning from them.

“It’s been helping me to enjoy engineering and STEM more,” he said.

Novant Health Medical Center sponsored a STEM Scholars camp in previous years, but the program ended after a short time. Horizons partnered with Novant to revive the camp in 2017.

“Novant Health Rowan Medical Center is delighted to once again partner with Horizons Unlimited to offer this valuable experience to students that helps build the health care workforce of the future,” hospital President Dari Caldwell said in an email.

A DaVinci with machines: Jim Carli’s creative side never…