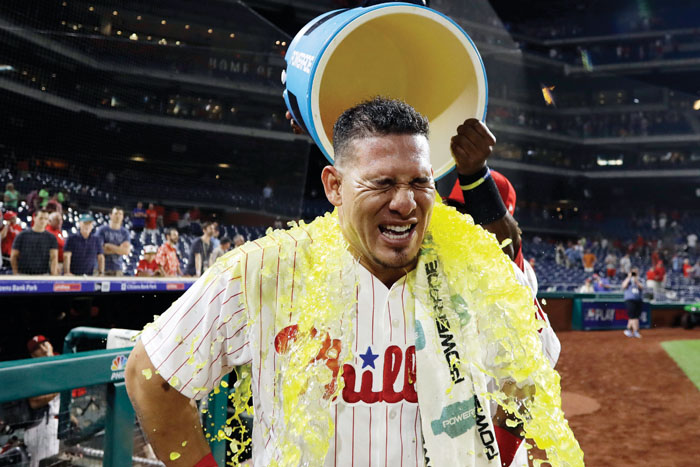 Philadelphia Phillies' Wilson Ramos is doused by Odubel Herrera after the Phillies' 7-4 win in a baseball game against the Boston Red Sox, Wednesday, Aug. 15, 2018, in Philadelphia. (AP Photo/Matt Slocum)

Jean Segura had four hits to help Seattle close within 2 1/2 games of the A’s for the second AL wild card.

Seattle’s Mike Leake pitched eight innings of two-hit ball with six strikeouts and one walk. Oakland’s Brett Anderson went 7 2/3 without allowing a run in his longest outing since June 16, 2015.

Nick Martini had three hits for the A’s and Matt Olson added two. Oakland entered the day one game behind first-place Houston.

Both teams squandered numerous scoring opportunities before Seattle scraped together two runs on one hit. After Petit (5-3) got leadoff man Denard Span to ground out, Mike Zunino walked. Gordon hit the next pitch over the right-field wall. Gordon’s only other home run was a solo shot against Cleveland on April 1 in Seattle’s third game of the season.

The Phillies remained two games behind first-place Atlanta in the NL East. They split a two-game interleague series with the major league-leading Red Sox for the second time in three weeks.

Ramos, the two-time All-Star catcher acquired from Tampa Bay on July 31, made a big impact after missing a month because of a strained hamstring. He hit his second career triple and first in seven years leading off the bottom of the sixth, chugging around the bases after his liner off Joe Kelly (4-1) to right-center took an odd bounce off the wall. Ramos scored on pinch-hitter Scott Kingery’s sacrifice fly to give the Phillies a 4-3 lead. He hammered a two-run double with two outs in the seventh off Drew Pomeranz to extend the lead to 6-3 and scored on Maikel Franco’s single.

CHICAGO (AP) — Anthony Rizzo homered, drove in three runs and stole two bases in his return to the cleanup spot, and Chicago beat Milwaukee to restore a three-game lead in the NL Central.

Jason Heyward added three hits and two RBIs to help Chicago bounced back from a 7-0 loss in the opener of the two-game series. David Bote had two hits, scored twice and made barehanded play at third base in his first action since he hit a game-ending grand slam Sunday night against Washington.

Kyle Hendricks (9-9) struck out eight in six-plus innings on his bobblehead day.

Todd Frazier homered and drove in four runs to help the Mets earn a split of the two-game interleague series. A home run by Wilmer Flores in the ninth enabled the Mets to reach a season high in runs.

Kevin Kiermaier, who was mired in a 4-for-46 slump in August, had two hits, scored a run and drove in one for the Rays. They have won seven of their past nine games against New York.

Reliever Ryan Yarbrough (11-5) then entered and was credited with the win after shutting down the Yankees over four scoreless innings. He allowed only two hits and struck out three.

Tampa Bay took advantage of an ineffective Luis Cessa (1-3), who was recalled from Triple-A before the game to make a start in place of an injured CC Sabathia.

Gerrit Cole (11-5) struck out 12 and the defending World Series champions stopped a nine-game home losing streak with their first win in Houston since July 14, their last game before beginning a 10-game road trip. Houston’s five home runs were a season high, and the run total was more than the Astros managed in their last four games combined.

Jorge Lopez (0-2), who was making his Royals debut after being acquired July 27 from Milwaukee as part of the Mike Moustakas trade, threw a 2-0 fastball that Granderson drove over the Royals’ right-field bullpen gate with two outs in the fourth inning.

The Cardinals are 18-9 since the All-Star break and have won sixth successive series.

Daniel Murphy homered in the ninth for Washington, which has lost four in a row and seven of nine to fall below .500 and nine games behind first-place Atlanta in the NL East.

Ozuna homered in the second inning, his 14th of the season and his first since July 30.

Gomber (3-0) gave up three hits, struck out six and walked four. Bud Norris pitched the ninth to pick up his 23rd save. Jeremy Hellickson (5-3) was the loser. He left in the fifth inning after colliding with Harrison Bader on a play at the plate following a wild pitch.

The White Sox have won two in a row after losing six of seven. The Tigers have lost nine of 12.

CINCINNATI (AP) — Melky Cabrera lofted a go-ahead two-run homer into the left-field seats in the sixth inning, and Cleveland beat Cincinnati for its fifth straight victory.

The Indians held the Reds scoreless after a three-run first. In the sixth, Cody Reed (0-1) walked Yonder Alonso before allowing Cabrera’s third homer of the season.

Dan Otero (2-1) got Phillip Ervin to fly out with the bases loaded and two outs in the fifth to earn the win.

Brad Hand worked out of a bases-loaded jam in the ninth for his 28th save.