James B. Carter: Millennials can vote in change for public education 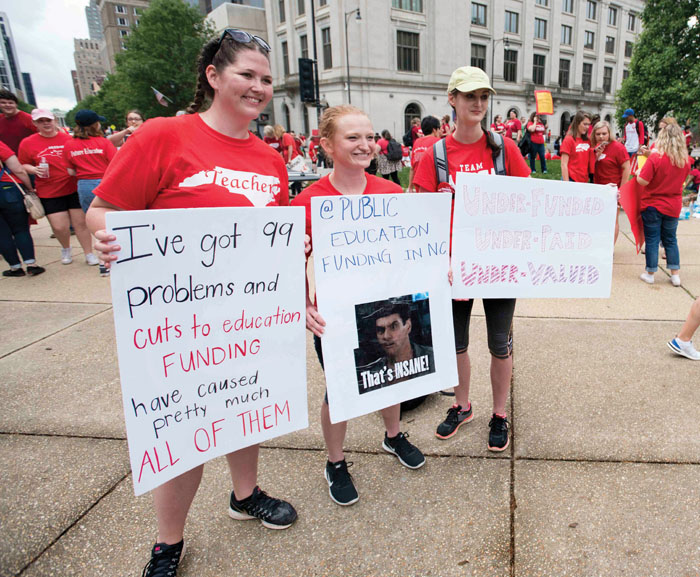 By James B. Carter

One of the most impressive scenes from the May 16, 2018 “Rally for Respect” held on the main streets of Raleigh and attended by tens of thousands of pro-public education teachers and advocates was not the number of red shirts being worn, the people who flocked to sidewalks and building tops to offer support, or even Gov. Roy Cooper and teacher-of-the-year Bobby Cavnar speaking to the crowds. What I found most impressive was the number of young people involved.

For decades, young educators have been among the most vulnerable within public schools. The mantra of “head down, mouth closed” was good advice until the state took away teacher tenure rights, and even today a new teacher must slavishly polish his or her relationships with local school leaders and mind the P’s and Q’s to ensure they remain employed at the end of each school year because district policies state that they can be fired for so many reasons that “no reason at all” might as well be among them.

However, many young people are feeling more empowered to speak up for their beliefs than we may have seen in America since the 1960s. Not only were thousands of young teachers marching in Raleigh, but they came toting provocative signs — about being proud to be considered “teacher thugs” or about working multiple jobs or suggesting certain “dance work” pays better than teaching.

Among the young people in attendance were those not-yet-teachers who want to be teachers. About a dozen seniors from South Rowan and Carson high schools — including several of my former Cougar students —were among the throngs marching and chanting. All suggested they would major in education or were thinking about it once they moved to campus this fall.

Many sources suggest that young voters, especially  Millennials, can have a huge impact on this November’s elections. Pew Research Center suggests Millennials could surpass Gen-Xers in voting power by 2020. Politifact reports that over 34 million Millennials voted in 2016.

Imagine the impact those millions of votes could have if each Millennial teacher and teacher-to-be focused on voting for candidates with pro-public education agendas. Especially in North Carolina, legislative races are of utmost import if we are to see House and Senate leaders shift their priorities away from corporate tax breaks and toward raising per-pupil spending and teacher salaries to the national averages.

A call to arms, a “shout-out,” then, to all newly hired teachers in RSS and those who just left Rowan County’s great high schools with the intention of one day returning to the K12 classroom:

If you can’t come home to vote, vote by absentee ballot. Vote for candidates offering support for needed improvements in North Carolina public schools. Listen for talk from candidates that suggest they are pro-charter school and pro-voucher. Such candidates do not support true public schools. Be smarter than those who may put political party before specific issues like public education. Make education your top priority for the November 2018 elections, and surely we will see the changes for which so many of you marched in Raleigh.

James B. Carter teaches at Carson High School and is vice president of the Rowan-Salisbury Association of Educators.