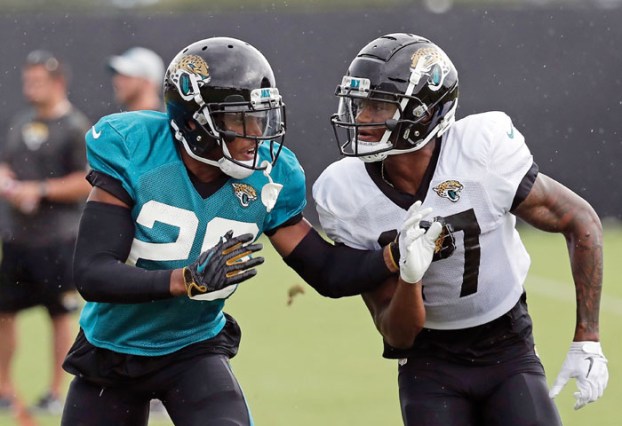 In this July 31, 2018, photo, Jacksonville Jaguars cornerback Jalen Ramsey (20) defends against receiver D.J. Chark Jr. during a practice at NFL football training camp in Jacksonville, Fla. Ramsey is making headlines from his couch. The Jaguars All-Pro cornerback is back in the news criticizing several NFL quarterbacks three days after being suspended for screaming obscenities at reporters. (AP Photo/John Raoux)

Three days after being suspended for screaming obscenities at reporters, the Jacksonville Jaguars All-Pro cornerback is criticizing several NFL quarterbacks — and praising a few.

The interview is part of an interesting week for Ramsey, who was suspended for the week after he screamed at media members who were videotaping a post-practice altercation between defensive ends Dante Fowler and Yannick Ngakoue.

“Right now, I haven’t even put much thought into it,” Jaguars coach Doug Marrone said before a joint practice with the Vikings in Minnesota. “For me, as a guy who had a cup of coffee and played in the league, I respect all the players who are out there. But I haven’t looked at the actual stuff. My focus right now is not on that. My focus right now is on our team getting ready to practice.”

Ramsey also predicted that Houston’s Deshaun Watson and Philadelphia’s Carson Wentz would be NFL MVPs down the road. He said Los Angeles Rams quarterback Jared Goff was “average to above average” and called Kirk Cousins “a winner.”

Ramsey weighed in on two dozen quarterbacks in all. The harshest comments were directed toward Ryan and Allen, the seventh overall draft pick from Wyoming. Buffalo and Jacksonville play in late November.

“I think Allen is trash,” Ramsey said. “I don’t care what nobody say. He’s trash. And it’s gonna show too. That’s a stupid draft pick to me. We play them this year … I hope he’s their starting quarterback.”

Ramsey said Ryan’s MVP season in 2016 was due to Shanahan, who was the Falcons’ offensive coordinator at the time and is now the San Francisco’s head coach.

“I think Matt Ryan’s overrated,” Ramsey said. “You can’t tell me you win MVP two years ago, and then last year, you a complete bust, and you still got Julio Jones? There’s no way that should ever happen. I don’t care. You know what that tells me? That tells me Shanahan left, went to San Francisco, got (Jimmy) Garoppolo, made Garoppolo this big thing. And now Garoppolo is a big name — and now (Ryan) has this bad year?

“All right, well, was it really you, or was it your coach? He was doing what was asked of him and it was making him look really, really good.”

Canadian star Barrett has 34 points in his Duke exhibition debut