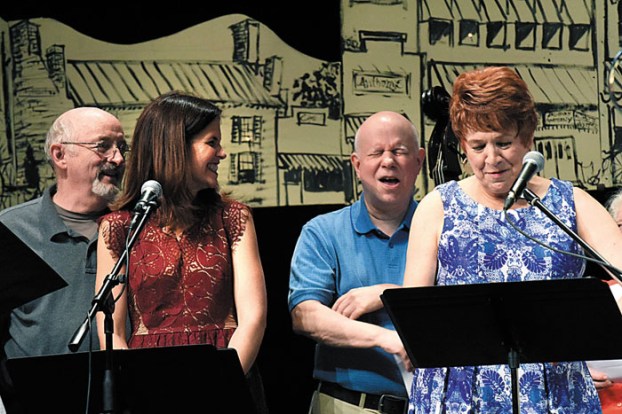 Conductor David Hagy reacts to his bad joke that he told in the "A Bury Home Companion Show," . photo by Wayne Hinshaw, for the Salisbury Post

Home, Home on the ‘Bury

It’s bright and early on a recent Thursday morning, and a small group of intrepid coffee drinkers stop by Koko Java for a short meeting. Soon, laughter erupts from the long table in the back. It’s no longer a secret that these people are the creative minds behind an upcoming variety show at the Meroney Theater, and the show they are laughing about is the second annual performance of “A ’Bury Home Companion.”
And creative they are. Though it was inspired by the original longtime National Public Radio show “The Prairie Home Companion,” the production is all-original and purely local, using local talent and poking good-natured fun at Salisbury and the people and places that make it special.
“Kent just has the funniest way of expressing himself,” says Kay Peeler, pretending for a moment that Kent isn’t sitting just across from her at the table. She and Kent are the creative forces behind scripting the show and arranging the many musical and comedic talents that will be showcased on August 25th.
Kent replies with a mock-serious face. “It’s not always intentional, I assure you.” But with a formidable array of musicians and performers and a script that sends the planning committee into uncontrollable giggles even after reading it several times, the two writers know they’ve got a true hit on their hands.
The show picks up on some of the original show’s familiar characters and punchlines — “Guy Noir,” “Tales from the Choir Loft” and “Lives of the Cowboys” ­­— and yet still manages to find the common threads that bind all of us who live in or near The ’Bury together.
Many of the performers from last year’s sellout performance are returning. This year’s lineup again includes the ’Bury Home Companion Band, led by Gold Hill resident and veteran bluegrass musician Vivian Pennington Hopkins. Vivian is the owner of the 1840 Montgomery General Store in Gold Hill, which is also known as the informal home of the N.C. Bluegrass Association. The musical duo of Eli Yacinthe and Sara Claire King are teaming up for a second time, and the Salisbury vocal harmony group The Moonglows will again perform as The ’Bury Home Singers.
Several talented additions will bring completely new flavors to the performances. Statesville musician Rockie Lynn and his band will join the cast, appearing for the first time in Salisbury. Rockie’s debut song “Lipstick” spent an impressive ten weeks as no. 1 on the Billboard Country Singles sales chart, and he has performed at the Grand Ole Opry and on Good Morning America. A former member of the 82nd Airborne with a heart for veterans, Rockie is also the founder of the national charity, Tribute to the Troops.
The Sevierville, Tenn. gospel harmony group Fortress will also make their debut Salisbury performance at “A ’Bury Home Companion.” The group recently released a new song, “Tell The Mountain (About Your God),” which is now playing on East Tennessee gospel radio.
Singer-songwriter Danny Basinger from Gold Hill will also lend his vocal talents to the performances.
Woven into the show are short homespun stories and anecdotes about some of Kent’s Salisbury experiences — often voiced in dramatic fashion by a cast of hilarious local comedic talent — featuring many of the unique, timeless things that make Salisbury such a special place to live, work, and talk about.
Choose from two performances of “A ’Bury Home Companion” on Saturday, Aug. 25 at the Meroney Theatre, 213 S. Main St. — a matineé at 2:30 p.m. or an evening show at 7:30 p.m.
Tickets for both performances are still available at www.salisburysymphony.org. Adults: $45, seniors 60+ $44 each.

‘All Things Tomato’ to be celebrated in Woodleaf on Saturday