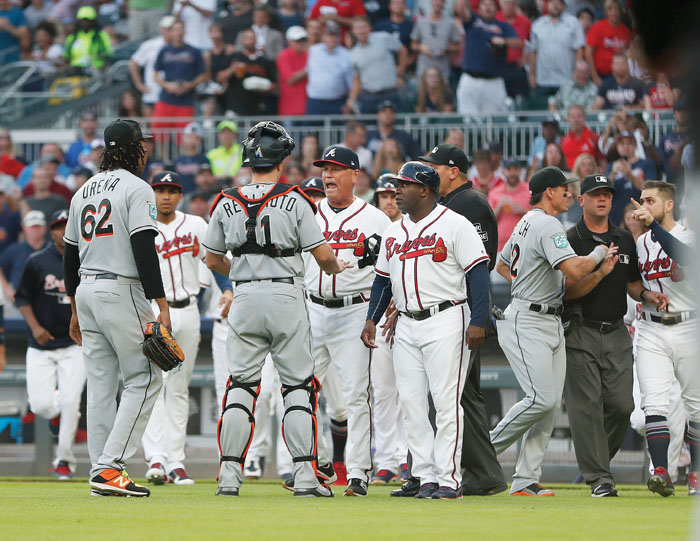 ATLANTA (AP) — Ronald Acuna’s chance to extend his three-game streak of leadoff homers was put on hold when the Marlins’ Jose Urena hit him with his first pitch on Wednesday night, triggering a melee that led to benches and bullpens for Atlanta and Miami emptying twice.

Urena and Braves manager Brian Snitker were ejected. Snitker had angry words for the pitcher as he led the first exodus from Atlanta’s dugout toward the mound.

Urena’s fastball hit Acuna’s left elbow, leaving Acuna in obvious pain. Trainer George Poulis hovered over Acuna, who sat on the ground near the batter’s box while players swarmed near the mound.

The Braves said X-rays on the elbow were negative and results of further tests would be announced on Thursday.

The Braves won the game 5-2 to complete a four-game sweep.

Snitker believed Urena intended to hit Acuna with the pitch.

“I’ll be honest with you. I’m not sure I’ve ever felt like that in a baseball uniform,” Snitker said. “That was just my emotion. That kid didn’t deserve that.”

Urena’s fastball was timed at 97 mph.

“Fastest pitch he’s thrown all year and it was clearly intentional and it wasn’t right,” Braves first baseman Freddie Freeman said. “Hopefully some things are done about it.”

Order appeared to be restored until Acuna walked near the mound on his path to first base, took off a shin guard and tossed it to the edge of the mound. That led to players again spilling out of both dugouts and bullpens. No punches were thrown.

Snitker was ejected by third-base umpire Paul Nauert, the crew chief. After the melee calmed down, the umpires huddled and then home plate umpire Chad Fairchild ejected Urena and warned both benches. That led to a protest from Marlins manager Don Mattingly.

Following a long delay to allow right-hander Elieser Hernandez, who replaced Urena, to throw his warm-up pitches, Acuna remained in the game to run the bases.

But Acuna’s stay was short-lived. He left in the top of the second, walking off the field after taking his position in left field.  Snitker said Acuna’s forearm was cramping when he left the game in the second inning.

Because he was forced from the game after being hit by the pitch in his only plate appearance, Acuna will be eligible to continue his streak of leadoff homers in his next game.

Urena has a history of control problems. Entering the game, he was tied for second in the National League with 10 hit batters. He tied for the major league lead with 14 hit batters in 2017.

The 20-year-old Acuna entered the game on a rare power streak. He hit two homers in Tuesday night’s 10-6 win over the Marlins. He became the first player to hit leadoff shots in three straight games since Baltimore’s Brady Anderson led off with homers in four straight games in 1996.

He tied the Atlanta record of five straight games with a homer, set by Brian McCann in 2006.

The NL East-leading Braves, who began the night two games ahead of Philadelphia, have won five straight. The last-place Marlins have lost five straight and eight of nine.

Kevin Gausman (7-9) allowed two runs in six innings. A.J. Minter pitched a perfect ninth for his 11th save in 12 opportunities.

The Braves trailed 2-0 before scoring three runs off left-hander Jarlin Garcia (1-2) in the fourth. Charlie Culberson, who doubled, scored from third on Ender Inciarte’s grounder to first base. After Tyler Flowers walked, Swanson cleared the center field wall with his 10th homer.

Culberson had three hits, including two doubles. Inciarte, who had a run-scoring single in the sixth, drove in two runs.

Starlin Castro led off Miami’s fourth with his 10th homer into the seats in right field.

The 20-year-old Acuna hit two homers in Tuesday night’s 10-6 win over the Marlins. He became the first player to hit leadoff shots in three straight games since Baltimore’s Brady Anderson led off with homers in four straight games in 1996.

He tied the Atlanta record of five straight games with a homer, set by Brian McCann in 2006.

Miami left fielder Austin Dean, a 2012 fourth-round draft pick called up from Triple-A New Orleans before the game, was held without a hit in his major league debut.

Braves LHP Max Fried, on the 10-day disabled list with a left groin strain, will make a rehab start for Triple-A Gwinnett on Friday — “quicker than we originally thought,” Snitker said. … LHP Sam Freeman (left shoulder inflammation) threw a scoreless inning for Gwinnett on Tuesday and is scheduled to throw again on Thursday.

Marlins: Miami, off Thursday, opens a weekend series at Washington on Friday night. RHP Dan Straily (4-5. 4.42) has a 3.86 ERA in two starts against the Nationals this season.

Braves: RHP Julio Teheran (8-7, 4.33) will look to continue his success against the Rockies in Thursday night’s opener of a four-game series. Teheran is 5-1 with a 2.21 ERA in nine career starts against Colorado.