A DaVinci with machines: Jim Carli’s creative side never quits 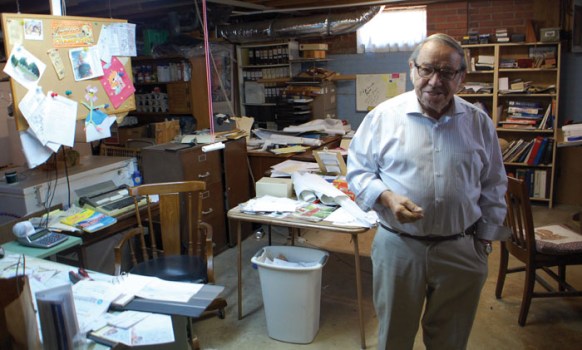 Jim Carli stands in the portion of his basement that he considers his office and design area. Mark Wineka/Salisbury Post 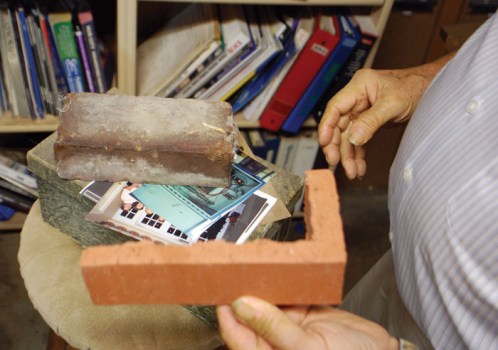 Mark Wineka/Salisbury Post One of the saws for the brick industry Carli has designed makes it possible to create corners needed for facades. 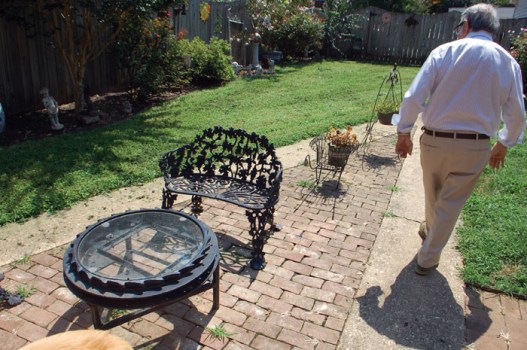 Mark Wineka/Salisbury Post The patio table in Carli's backyard was fashioned out of metal salvaged from the Grimes Mill fire. 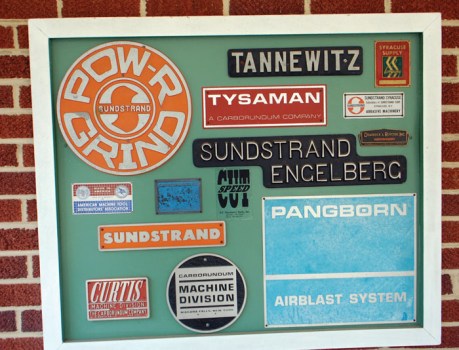 Mark Wineka/Salisbury Post On his back porch, Carli framed in metal tags from the various companies and divisions he ha worked for, including his former N/C Macining (Speed Cut) in Salisbury.

SALISBURY — Jim Carli’s basement betrays that he is still a busy guy.

He devotes about half the space to a shop, building wood mockups to make sure certain mechanisms are going to work.

The rest of the cellar serves as an office and design area, where he draws up prototype machines or works on mechanical answers to a company’s problems.

So far this year, the 80-year-old Carli has designed, assembled and delivered three of his stone- and brick-cutting machines — two to Texas and one to Massachusetts.

On his basement drawing board, Carli is designing a machine for Old Carolina Brick in Salisbury that will put a rub finish on bricks. Right now, company employees apply the finish by hand.

“For the last 15 years,” Carli says, “I’ve worked exclusively in the brick industry, the friendliest industry you can work in. I got all my business by word of mouth.”

His machines have been used for jobs such as sawing brick and stone, cutting out corners from those materials, coloring, grinding and distribution needs.

Carli draws out plans by hand, then does 90 percent of a machine’s assembly in Winston-Salem, where a company manufactures his parts. That company allows him about a 20-by-20-foot work space and charges him only for what it manufactures.

A place in Bessemer City makes gears for Carli when needed.

Once a client’s new machine is assembled, Carli follows the machine into the field, sets it up and trains people to use it. He can be away from home for extended periods.

“I don’t want to work that hard,” Carli says, “but I want to stay active. … I tell people to keep moving so your age can’t catch you.”

“I have probably built 50 to 75 one-of-a-kind machines,” Carli says, looking back at his creations.

They have been as small as a desk and 100 feet long with conveyor lines.

On his back porch, Carli has framed a collection of metal nameplates from all the machining operations for whom he had worked over a half century, including his own former company in Salisbury.

In the backyard, he shows you a tall sculpture by the fence and a coffee table on the patio. He created both the sculpture and table out of metal parts salvaged from the Grimes Mill fire.

That fire devastated Carli. He received flowers and cards from people who knew how much the Historic Salisbury Foundation property meant to him.

“It was on my bucket list to get that thing going,” Carli said of the flour mill. He and other volunteers with HSF had done major cleaning at the mill, and Carli thought that with the right investment, its century-old machinery could be working again.

Carli already had plans to build a ramp for physically disabled visitors to the mill when the fire destroyed the historic structure.

Betty Carli considers her husband a DaVinci of sorts.

“The man never sits still,” Betty says. “He’ll build a machine for anyone who wants one. He doesn’t let anything stand in his way,”

Jim and Betty Carli came to Salisbury in the early 1980s to own and operate N/C Machinery Parts Inc.

The company’s work crossed all industry lines, maintaining and producing parts for places such as Norandal, Owen-Illinois, Bendix and Cannon Mills. It also produced prototypes when needed.

Carli’s company started out on Warehouse Drive, then D.C. Linn erected a 7,500-square-foot building for him in 1983 at the corner of Mildred and Walnut streets.

At N/C Machinery Parts Inc. (the “N/C” stood for “Numerical Control”) Carli employed 10 to 12 people, including Betty and a son. He says he offered competitive wages and good vacations.

The company never mass produced anything, Carli emphasizes. “A production run for me was two,” he says, laughing.

“I didn’t want to be big. I wanted to make a decent living, contribute and have fun.”

Carli sometimes felt he was running a “postgraduate school” for young men coming out of Rowan-Cabarrus Community College. They would gain experience with his company for a while and move on to other jobs.

As the years went by, he also sensed he was hiring more machine operators and fewer machinists, and by the time he closed about 15 years ago, “my crew was aging out,” Carli says.

He auctioned off the machinery at his plant, and his big building took about a 18 months to sell.

The whole experience — owning his own company and working alone today — has taught him one thing, something quite counter to his early career.

“I’d probably have a hard time working for someone now,” he says.

Carli comes by his passion for building things honestly.

A native of Niagara Falls, New York, he lived about a 1.5-mile bicycle ride from the famous falls. His father died when he was only 8, and his sister siblings were 1 and 9.

His mother raised the children alone, and Jim’s father figure became his grandfather, who had been in the construction business (a masonry contractor) since 1903.

As a kid, Jim was cleaning tools and shoveling ditches. By 9 years old, he would accompany his grandfather on measuring jobs for projects such as basements and sidewalks.

“I learned all the trades,” Carli says. “The only thing I could never master was plastering a ceiling.”

Carli majored in civil engineering at Georgia Tech, went back home and started work in 1959 for the Curtis Machine Division of Carborundum in Niagara Falls.

His grandfather wanted him to run the family business, but Carli told him, “Gramps, I would have to fire two of your sons.”

Carborundum made coated abrasives and grinders. “I got involved with their machinery … and I’ve been working on machines ever since,” Carli says.

He eventually became the machine division’s chief of engineering, and the company sent him to Knoxville, Tennessee, where he met and married Betty, who had just been accepted into the University of Tennessee law school.

It was the second marriage for both, and their blended family had six children. Today, they have 10 grandchildren and three great-grandchildren.

The demand for Carli’s expertise and Carborundum’s divestiture of its machine group led him from one company and city to another. He worked for Tysaman, Tannewitz and Sunstrand, working successively in Knoxville; Hagerstown, Maryland; Grand Rapids, Michigan; and Syracuse, New York.

“I’ve been lucky,” Carli says, “I’ve lived all over the United States, and I’ve only applied for a job once (his first one with Carborundum). Otherwise, people have come to me.”

“I missed being creative,” he says. “I just wasn’t having fun.”

Carli decided to look for a place of his own, and the search led him to a machine shop Dick Reamer had in Salisbury.

Carli says he bought the business mostly for the machines and was off and running.

He never expected to be in Salisbury this long — now close to 40 years. Today, he describes himself as a Yankee by birth but a Rebel by choice.

Jim and Betty Carli have been strong patrons of the Salisbury Symphony and Historic Salisbury Foundation. Jim also was heavily involved in the Chamber of Commerce and the Sales and Marketing Executives Club as a local and area director.

Church missions have taken him to building projects in places such as Haiti, Belize and Mexico, and in years past, Carli also did a lot of work on Habitat for Humanity homes, lending his considerable building talents.

Carli doesn’t get on his soapbox often, but he speaks strongly of the need for vocational high schools in North Carolina.

Not everybody is meant to attend college, he says, and vocational training can lead to some rewarding careers, some that might even last 60 years such as his.