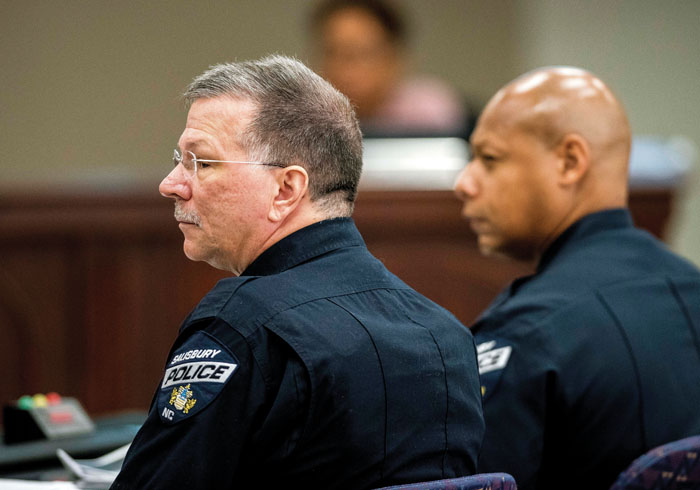 SALISBURY — Two societal issues close to the heart of Cleveland resident Michael Stringer are making a positive impact in the lives of youth and helping support convicted felons as they work toward becoming model citizens.

Stringer hopes that the answers about how to reach youth and prevent recidivism lie in the findings of a recent assessment of the Salisbury Police Department by an arm of the U.S. Department of Justice.

Stringer was among local residents who attended a meeting Tuesday morning at which the Police Department and the assessment agency presented the findings.

The Police Department has been working toward implementing some programs and strategies to reduce gun violence.

In November, the Police Department reached out to the Office of Justice Programs Diagnostic Center for help assessing what works to prevent and controll crime. The center analyzed crime data over a period of time, and the Police Department is implementing recommendations to reduce gun violence based on the center’s findings.

The Diagnostic Center worked in the community and with law enforcement to understand the issues related to crime. The center collected data and provided analysis and recommendations. The center also identified training and technical assistance to support implementation of those recommendations.

Three priority areas were identified through the assessment:

Analysts said the common features of effective programs include the use of street outreach workers, connections with community services and support for high-risk youths. Some of the recommendations include focusing on youths at the highest risk for future violence and communicating to targeted offenders that they will have access to resources to change their lifestyle.

Stringer, who is retired from the Air Force, attended Tuesday’s meeting at City Hall out of concern about crime in the community. He said he’s been a mentor for at-risk youth since his days working with 12-,  13- and 14-year-olds at Knox Middle School. He said a lot of the 20-somethings who are victims of recent gun violence or perpetrators of gun violence were part of his at-risk youth intervention program.

Stringer said resources have to be available for felony offenders who re-enter society after prison stints and are not able to get good-paying jobs. Many of them give up because no one has given them a chance, he said, and some eventually return to a life of crime.

Some of the strategies presented Tuesday included looking at gun violence in “hot spots” or areas where crimes occur in clusters or in specific blocks repeatedly. A small number of high-rate offenders commit shootings at specific places and times, the report noted. 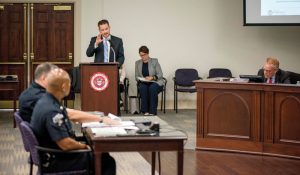 Officers should fill out reports properly so the department has data that it can measure.

The development of a social media strategy “gives the Police Department the opportunity to continue to communicate with the community,” Nunez said.

Nunez said the department would benefit from detectives having smaller caseloads.

The department, Nunez said, could benefit from education about the importance of effective communication and how to foster it.

Part of the analysis looked at one of the most high-crime areas in the city, the West End community. The data showed a high number of violent incidents in concentrated areas of that neighborhood.

That violence was often between individuals who are familiar with each other, including family, partners and neighbors.

Jessica Herbert, a junior diagnostic specialist with the Diagnostic Center, told the audience that reports of gun violence are concentrated on weekends and late at night, which is similar to national trends.

The locations where gun violence incidents are most common in multifamily housing, the findings show.

The report said technology grants are available through the Bureau of Justice Assistance. The grants could pay for firearm analysis equipment to assist the Police Department with evidence collection and submissions to the forensic lab. A grant could also fund a technical analyst position.

Another grant opportunity could mean partnering with Rowan-Salisbury Schools to focus on crime and security incidents in and around schools as well as security assessments for the schools, as well as training teachers in conflict resolution.

Police officers have attended training, and the department is considering other training and resources based on the Diagnostic Center’s recommendations. Officers attended training in Charlotte in April about forward thinking for improving crime analysis practices and technology.

A fall training session will deal with homicides and nonfatal shootings.

Stokes said the department will continue its partnership with federal and local agencies to support investigations of serious violent crimes.

Mayor Al Heggins asked how many people were interviewed for the data collection and how many of then were revisited. The analysts said about 15 to 20 people from various facets in the community were interviewed.

Heggins asked if anyone from Stop the Violence was interviewed, and Stokes said yes. She said after the meeting that there definitely needs to be connections made with organizations like Stop the Violence and Salisbury Neighborhood Action Group. She said the piece that’s missing is connecting with community members affected by crime, like those who live in West End.

Renee McNutt said the more the Police Department brings people into the process of solving the violence problems, the more people will have a sense of ownership about coming up with solutions.

Geoffrey Hoy, who attended the meeting and took notes, said he wanted to hear the findings from the report.

“I knew this study was going on, and I’m glad they requested this self-study,” Hoy said of the Police Department.