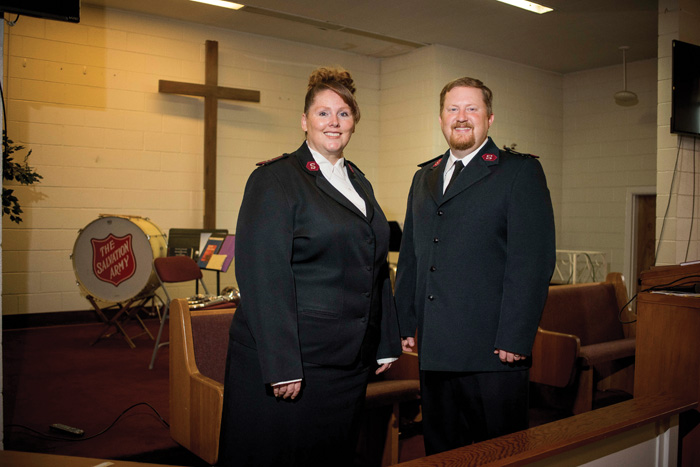 SALISBURY — Even before they joined the Salvation Army, Karl and Janice Dahlin each had an affinity for the charitable organization that dates to their youth.

The couple, who were recently appointed to lead the local Salvation Army branch, both attended Salvation Army camps. They actually met while working at Camp Happy Land in Virginia.

For Karl, the connection goes back every further: His parents met at Wonderland Camp in Wisconsin.

“It affirms the need for these programs and how powerful they can be,” Karl said.

A Salvation Army lieutenant who put a horn in Karl’s hands sparked his love of music. Throughout his youth, Karl Dahlin participated in regional and international music programs. He plays the baritone horn.

“It’s a unique ministry. It grabs ahold of the youth and keeps them on track,” Karl said of the Salvation Army.

“I saw that it was a safe place,” she said, noting that a number of campers were in foster care.

At camp, Janice recalls telling each girl at the end of the night that she loved them and that God did too. An 11-year-old girl confided in Janice that no one had ever told her they loved her. The camp provided the young girls a place of safety and, in some cases, a regular meal.

As counselors, Karl said he and his wife were able to see returning campers and watch them grow.

The captains made plans to meet with a few Rowan County community leaders to ascertain the needs of the community.

The Dahlins would like to see a music program, perhaps with a weekly after-school band program. Karl said he could see partnering with a local group, arts program or foundation to fund a music program.

One of the couple’s success stories is a young man who attended their music program and stuck with it when others stopped attending. The young man saw many of his friends go to prison. He has now joined the Marine Corps and will also be apart of the Marine Corps band.

Just recently, the couple faced dealing with a break-in at the Salvation Army office. Vandals damaged the refrigerator and walk-in freezer, which led to a loss of food stored inside.

“It was an immediate show of need for the neighborhood,” Janice Dahlin said. “It shows a need for youth programs to inspire youth to do good. It’s proof that we need to do good with the youth in the community.”

The Dahlins were appointed to lead the agency by the Salvation Army’s North and South Carolina Division.

Before coming to Salisbury, the Dahlins managed the Salvation Army chapter in Montgomery County, Maryland.

The Dahlins succeed Capts. Bobby and Nakisha Carr, who are now assigned to the Solomon G. Brown Corps in Washington, D.C.

The Dahlins said they hope to expand on programs that the Carrs began.

Salvation Army officers serve with chapters from one to five years, although the average is four.

Originally from Chesterfield, Virginia, Karl Dahlin has been a Salvation Army officer for 14 years.

Janice Dahlin is originally from Florida and has had additional appointments in McColmb, Mississippi, and the National & Capital Division Headquarters in Washington.

“We try to do our best to serve the community,” Janice said.