Tired of the same old eats? Try this 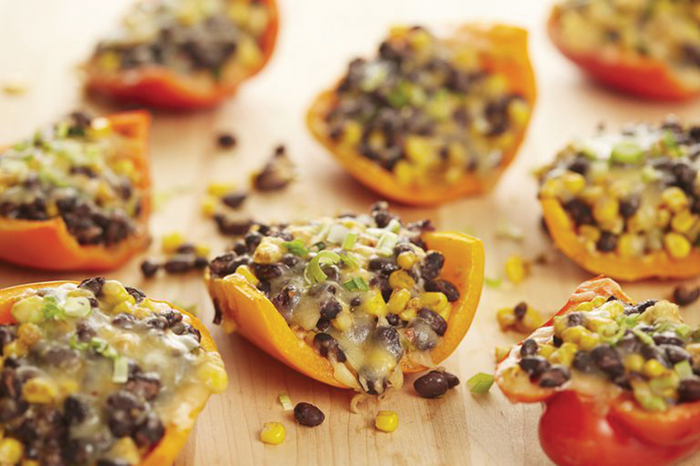 Delish.com Peppers stuffed with black beans and corn are a quick weeknight meal.

Seems like summer has been here for far too long.

The heat and humidity don’t let up, and when it rains, it’s torrential, like we’re living in the tropics.

Growers of all sorts are having problems this year. Rain comes at the wrong time, storms pelt holes in tomatoes or rip blueberries from the bushes.

There’s still plenty of fresh food out there — the zucchini and squash and cucumber keep going, and the peppers, from big bells to bossy hots — are abundant.

But coming up with an idea for dinner just gets harder — at least for some of us — as the days wear on with not much change. Ideas evaporate about now, though you’re still so thankful for the fresh tomatoes and corn on the cob.

Searching for some ideas about what to do next, I came up with a few things that don’t take long and are versatile.

Using tomatoes and squash in a gratin takes care of what’s been sitting on the kitchen counter. Serve some quick chicken bites with it and there’s your meal. Use thigh meat for juicier bites.

If you are too tired on Monday to fix dinner, plan to put together a foil packet that has protein, carbs and a green vegetable on Sunday night. Just put them in the oven when you’re ready. Or take them camping if you have one last trip planned.

The peppers look great now, and are always good in salads, on pizza, with stir-fry.  Stuff them with something other than rice and ground beef and get a spicy meal in a pepper with black beans and corn. Serve a cool salad on the side to counteract the spicy. The original salad called for red onion, which is fine, but it can carry some heat. Use a sweet onion for a cooler salad.

And don’t give up yet. Soon, it will be time to plan meals for your over-scheduled family and think about school lunches and the upcoming potlucks and maybe, one day, fall.

Place one layer of sliced squash in the bottom of a 9-by-13-inch baking dish. Top with a layer of sliced tomatoes. Season with salt and pepper and a few basil leaves. Generously drizzle olive oil over everything and sprinkle a little parmesan cheese on top. Repeat in the same order until you run out of vegetables. The top layer should be tomatoes.

Add a final toss of parmesan and a generous coating of breadcrumbs and more olive oil. Bake until everything is soft, bubbly and brown on top — about 30-40 minutes. Serve as a side dish. Serves 4.

When ready to cook, arrange a rack 4-5 inches from the heating element and heat the oven to broil. If using wooden skewers, soak in water at least 15 minutes. Line a rimmed baking sheet with foil and coat with cooking spray.

Thread the chicken onto the skewers, 6-7 pieces per skewer. Place the skewers in a single layer on the baking sheet. Broil until charred in spots, about 8 minutes. Top with chives, if using. Serve with dipping sauce.

Or grill on medium high heat 3-4 minutes per side.

Chicken thighs will be juicier and cook in slightly less time.

12 ounces smoked sausage, such as andouille or kielbasa, cut into 1 inch pieces

Preheat oven to 425 degrees or preheat a gas grill to medium high.

Measure four 8-by-8 pieces of heavy duty aluminum foil and set aside.

Combine sausages, potatoes, green beans and tomatoes in a large bowl. Add the Cajun seasoning and butter and toss to coat.

Divide the mixture among the four pieces of foil. Fold each piece into a tight seal. Cook for 20-25 minutes in the oven or on the grill.

Be careful when opening, it will be quite steamy.

Preheat oven to 350 degrees. In a large pot of simmering water, steam peppers 5-7 minutes. Drain and cool. Once cool, cut in half and arrange in a large glass baking dish.

Combine black beans, corn, 1/2 cup pepper jack, 2 scallions, chili powder and hot sauce in a large bowl. Use this to fill the pepper halves and sprinkle with more cheese. Bake until cheese is melted and mixture is warmed through, 7-10 minutes.

Garnish with scallion and serve with a dollop of sour cream.

Combine tomatoes, cucumber, onion and avocados in a bowl. Drizzle with olive oil and lemon juice. Just before serving, add salt and pepper. Avocado really likes salt, so be generous.