Greg Alcorn to resign from State Board of Education 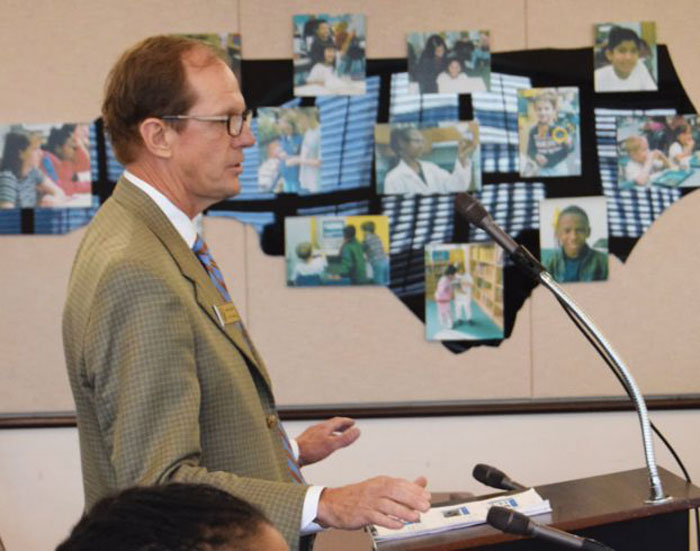 Greg Alcorn addresses the State Board of Education about the possible expansion of ApSeed. Salisbury Post file photo

SALISBURY — The past five years have been busy ones for Greg Alcorn. During his time on the State Board of Education, the Salisbury native has served under two governors, worked with two state superintendents, and listened to the advice and guidance of five state teacher, principal and superintendents of the year.

“Those advisers were priceless,” Alcorn, 60, said in a Monday interview.

Last week, Alcorn made the decision to resign from his seat on the State Board of Education, normally an eight-year term. His resignation is effective after the board’s Sept. 6 meeting. While the decision wasn’t an easy one, Alcorn said he believes he’s made the right one.

“It was a great personal choice for me,” he said.

Alcorn was appointed to the board by Gov. Pat McCrory in April 2013. Both had a history in Salisbury — Greg is a local, and both are graduates of Catawba College. McCrory said he was looking for someone with a business and finance background to serve on the board.

“And I think Pat asked everyone he knew and three dead people before he got to me,” Alcorn joked.

Alcorn chairs Global Contact Services LLC and has an extensive history in business. Education, however, was a brand new world.

“That was a huge leap for me,” he said of joining the Board of Education.

But his years on the board helped him discover his passion — ApSeed. Alcorn started the nonprofit agency that provides e-readers to at-risk children in 2016. The organization was born of a desire to have a generational impact and to improve third-grade reading test scores.

“I got a lot more out of (the board) than I ever would have thought of or deserved,” he said.

ApSeed is also playing a role in Alcorn’s decision to resign. He’d like to devote more time to it, he said.

“Things with ApSeed are just going crazy,” he said. “You know, we all just have the same number of minutes.”

Also contributing to Alcorn’s resignation are recent budget and staff cuts at the Department of Public Instruction and recent power struggles between the State Board of Education and Superintendent Mark Johnson. Alcorn said he isn’t comfortable with the detailed legal requirements of the job or its often-political nature.

“In the last few years, that’s become more of what the board has been required to do, and that’s not where my strengths are,” he said.

“I work better in growth environments than in shrinking environments,” he said. “I can be more valuable in that — and ApSeed’s growing.”

In addition, Alcorn plans to continue his work with alma mater Catawba College, where he will serve as incoming chairman of the finance committee. While he may have been unfamiliar with education in 2013, Alcorn has taken to the subject like a duck to water and is determined to effect change — especially in his hometown.

“To do that locally is very rewarding,” he said.

While Alcorn doesn’t know who will replace him — or the three other State Board of Education members who announced their resignations this month — he hopes it will be someone with a business or finance background. The perspective, he said, is hugely helpful to the board in being able to cultivate ideas like return on investments and efficiency.

“Things that a taxpayer can point to and say, ‘Oh, OK, that’s the value that I’m getting,'” he said.

Being able to bring that perspective to the State Board of Education over the past five years is what Alcorn said he’s proudest of.

In addition to working with ApSeed and Catawba College, Alcorn plans to stay involved in local education — especially now that Rowan-Salisbury Schools has been named the state’s first renewal school district and given charter-like flexibilities. Alcorn sees the return of local control as the future of education.

“We’re sitting right in it. We’re in the epicenter of educational change in North Carolina potentially,” he said.

Alcorn lives in Salisbury with his wife of 28 years, Missie. The couple have two grown children.